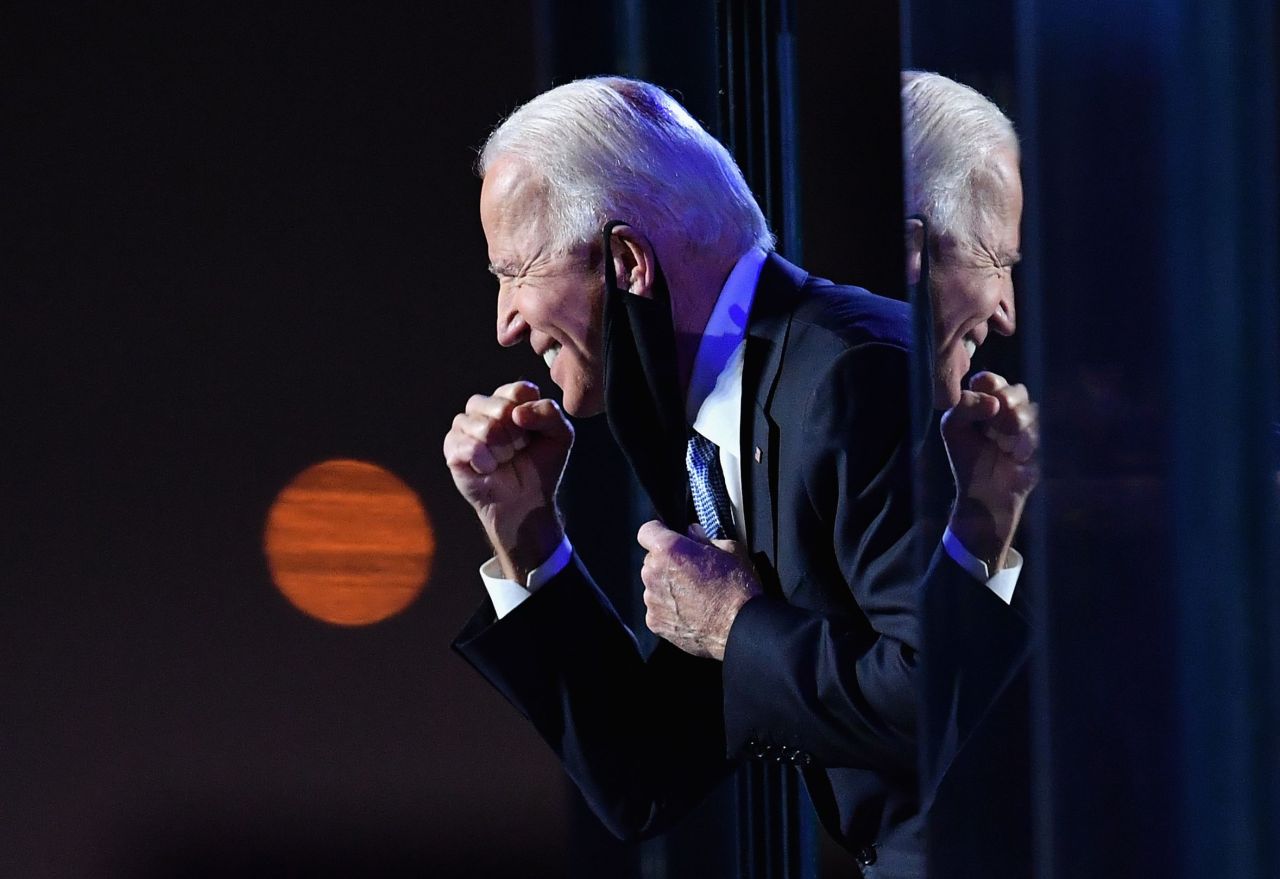 US President-elect Joe Biden gestures to the crowd after he delivered remarks in Wilmington, Delaware, on Saturday. - Democrat Joe Biden was declared winner of the US presidency Saturday, defeating Donald Trump and ending an era that convulsed American politics, shocked the world and left the United States more divided than at any time in decades. (AFP-Yonhap)
WASHINGTON (AFP) -- US President-elect Joe Biden took the first steps Sunday towards moving into the White House in 73 days, as Donald Trump again refused to admit defeat and tried to sow doubt about the election results.

With congratulations pouring in from world leaders and supporters nursing hangovers after a night of celebrations, Biden and Vice President-elect Kamala Harris announced they would receive a joint briefing Monday in Wilmington, Delaware from their transition Covid-19 advisory team.

Biden would then deliver remarks on coronavirus and economic recovery.

Meanwhile, Trump played golf at his course near Washington, the same place where he was Saturday when news broke that Biden had secured enough Electoral College votes for victory.

"Since when does the Lamestream Media call who our next president will be?" Trump complained in a tweet on Sunday.

Trump, who has no public events scheduled for Monday, plans to file a string of lawsuits in the coming week, according to his lawyer Rudy Giuliani, who said he had "a lot of evidence" of fraud.

But former president George W. Bush said the "outcome is clear" and added that he had called "President-elect" Biden and Harris to extend his congratulations.

Bush said in a statement that "the American people can have confidence that this election was fundamentally fair... We must come together for the sake of our families and neighbors, and for our nation and its future."

"The team being assembled will meet these challenges on Day One," it said in a reference to January 20, 2021, when Biden will be sworn in as the 46th president of the United States.

Biden, who turns 78 on November 20, is the oldest person ever elected to the White House. Harris, 56, a senator from California, is the first woman, first Black person and first South Asian person to be elected vice president.

Biden plans to name a task force on Monday to tackle the coronavirus pandemic, which has left more than 237,000 people dead in the United States and is surging across the country.

He has also announced plans to rejoin the Paris climate accord and will reportedly issue an executive order on his first day in office reversing Trump's travel ban on mostly Muslim countries.

Biden has vowed to name a cabinet that reflects the diversity of the country, although he may have trouble gaining approval for more progressive appointees if Republicans retain control of the Senate -- an outcome that will depend on two runoff races in Georgia in January.

Biden, who after John F. Kennedy is just the second Catholic to be elected US president, attended church Sunday morning in his hometown of Wilmington, Delaware.

He also visited the graves of his son, Beau Biden, who died of brain cancer in 2015, and his first wife and daughter, who died in a 1972 car accident.

The Trump campaign has mounted legal challenges to the results in several states, but no evidence has emerged of any widespread irregularities that would affect the results.

Giuliani told the Fox News show "Sunday Morning Futures" that Trump's team would file a lawsuit in Pennsylvania on Monday against officials "for violating civil rights, for conducting an unfair election (and) for violating the law of the state."

"The first lawsuit will be Pennsylvania. The second will either be Michigan or Georgia. And over the course of the week, we should get it all pulled together," Giuliani said.

Biden received nearly 74.6 million votes to Trump's 70.4 million nationwide and has a 279-214 lead in the Electoral College that determines the presidency.

Democratic Representative James Clyburn of South Carolina said the Republican Party has a "responsibility" to help convince Trump it is time to give up.

Romney, who voted to convict Trump at his impeachment trial, said the president will eventually "accept the inevitable."

The Utah senator added that he "would prefer to see the world watching a more graceful departure, but that's just not in the nature of the man."

"We will work with Biden if he wins, but Trump has not lost," Graham said on Fox News. "Do not concede, Mr. President. Fight hard."

In a victory speech on Saturday, Biden promised to unify the bitterly divided nation and reached out to Trump supporters, saying, "They're not our enemies, they're Americans."

"Let's give each other a chance," he said. "Let this grim era of demonization in America begin to end, here and now."

Financial markets welcomed Biden's victory, with shares up in Tokyo and Hong Kong, and US futures up on Wall Street on Sunday evening.

Mexican President Andres Manuel Lopez Obrador said he would wait until all legal challenges are resolved, while Trump ally President Jair Bolsonaro of Brazil has yet to make any official comment.