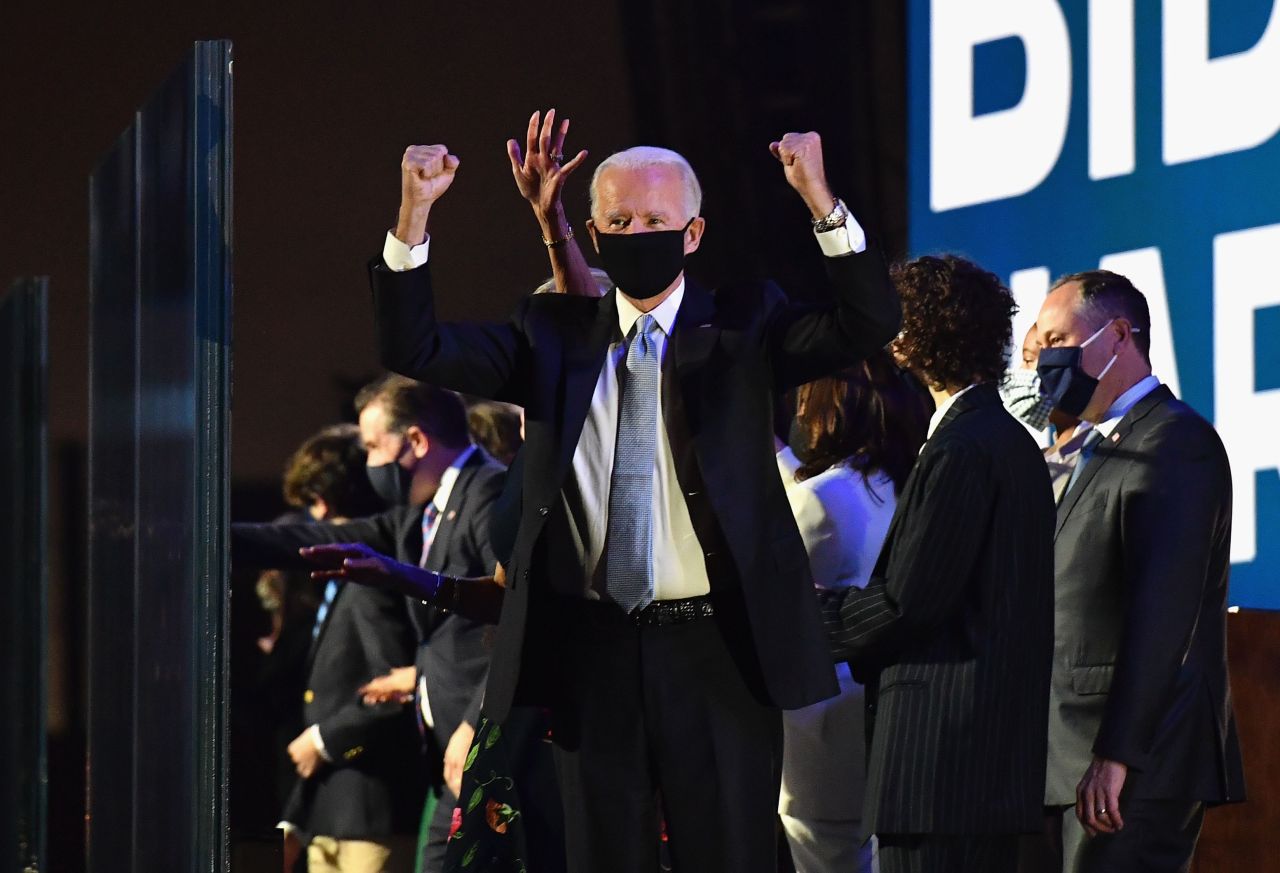 President-elect Joe Biden gestures to the crowd after he delivered remarks in Wilmington, Delaware, on Saturday. (AFP-Yonhap)

With Democrat Joe Biden’s victory in the US presidential race, South Korea will seek to forge ties with the new administration to further bolster the alliance and make progress toward peace on the Korean Peninsula.

“Congratulations to @JoeBiden and @KamalaHarris. Our alliance is strong and the bond between our two countries is rock-solid,” Moon wrote via Twitter. “I very much look forward to working with you for our shared values. I have great expectations of advancing and opening up the future development of our bilateral relations,” he said, ending the message with “Katchi Kapshida!” -- the catchphrase of the Korea-US alliance, meaning “We go together.”

While Trump had not delivered a customary concession speech as of press time, and it is unsure if he will accept defeat any time soon, Seoul officials are expected to start building rapport behind-the-scenes with officials and experts connected to Biden’s aides and inner circle, to develop channels into an incoming Biden administration.

South Korean Foreign Minister Kang Kyung-wha left to Washington on Sunday to meet with her US counterpart, Secretary of State Mike Pompeo.

“Though it’s a somewhat sensitive period, South Korea and the US have always been communicating, and we, at a ministerial level, discuss the Korean Peninsula situation and pending issues whenever there are opportunities, regardless of the timing,” Kang told reporters at Incheon Airport as she was departing to Washington.

She added that she is planning to meet people working in the US Congress and in academia to create opportunities to further strengthen the Korea-US alliance.

When asked whether she was meeting Biden’s aides during the trip, she declined to provide details, but added she may have to assess the situation while there.

“The Foreign Ministry has been communicating directly and indirectly with key figures in the Biden camp and the Democratic Party,” the ministry said in a statement after Biden’s victory was announced. “Based on the network that we have so far established and through close communication and cooperation, we will continue our efforts to strengthen the Korea-US alliance and make progress in the process for peace on the Korean Peninsula.”

A small group of South Korean lawmakers, led by Song Young-gil, chairman of the parliamentary Foreign Affairs and Unification Committee, is planning to visit Washington next week. During their trip, the lawmakers are expected to meet US congressmen and experts from think tanks that have links to Biden.

The White House in Biden’s presidency would mean a significant shift from the four years under Trump, in regards to critical issues affecting Seoul. Biden is expected to restore and strengthen the alliance with South Korea, while opting for a “step-by-step” approach and push for tighter sanctions on Pyongyang, experts say.

“Biden’s key pledge was to restore multilateralism and improve relationships with traditional allies, including South Korea. This means the alliance relations will likely improve and pending issues like defense cost-sharing talks could be resolved soon,” Park Won-gon, a professor of international politics at Handong Global University, told The Korea Herald. “Biden will also demand an increase on Seoul’s part on cost-sharing, but the difference with Trump is that the amount would be more logical and at a level Seoul could accept.”

Harry Kazianis, the senior director of Korean Studies at a Washington-based think tank Center for the National Interest, echoed a similar view of the ongoing talks on renewal of the Special Measures Agreement, the pact that governs the upkeep of the roughly 28,500 strong US Forces Korea.

“A Biden administration would quickly try to conclude an SMA with Seoul and very quickly -- something that should be done in the first one-hundred days of taking office -- with Biden also having no issue with handing over OPCON by 2022,” Kazianis wrote on his Twitter.

“The good news is that Biden and his advisers see alliances not in terms of dollars and cents but how they knit important nations to Washington in an international system that has kept the peace broadly between the world’s most powerful nations since the end of World War II,” he said, stressing it is these alliances, according to Biden, that “are what make America a superpower and are Washington’s greatest strength.”

But an enhanced alliance would mean more pressure on Seoul to side with its longtime security ally Washington to counter China, Seoul’s top trading partner.

“Biden said he would work closely with liberal democratic allies to keep China in check,” said Park. “That would mean Seoul’s space to choose between Beijing and Washington could diminish.”

As for dealing with North Korea, Biden will differ greatly from the top-down approach, as President Trump met North Korean leader Kim Jong-un three times during his tenure.

“A Biden administration is more likely to pursue working-level talks with Pyongyang rather than summits and big deals,” said Leif-Eric Easley, a professor at Ewha Womans University in Seoul.

During his campaign, Biden had said he would only meet North’s Kim on the condition that Pyongyang agrees to reduce the country’s nuclear capability. Many observers view that Biden will take a systematic and more traditional approach to deals with North Korea, with tighter sanctions and a focus on coordinated efforts with allies to press Pyongyang to give up its nuclear arsenal.

But this also raises concern for a possible clash with South Korean President Moon Jae-in’s push for summit diplomacy and engagement efforts with Pyongyang.

In the meantime, Pyongyang could provoke with military actions as a way to gain the upper hand in dealing with the new Biden administration, and not wait for Washington’s months of policy review to come up with a strategy on Pyongyang.

“The US and its allies need to coordinate responses to North Korea’s upgraded long-range and submarine-based missiles because Pyongyang’s next move may be to conduct a provocative test as a ‘welcome gift’ to Biden before demanding financial benefits to reduce military tensions,” said Easley.