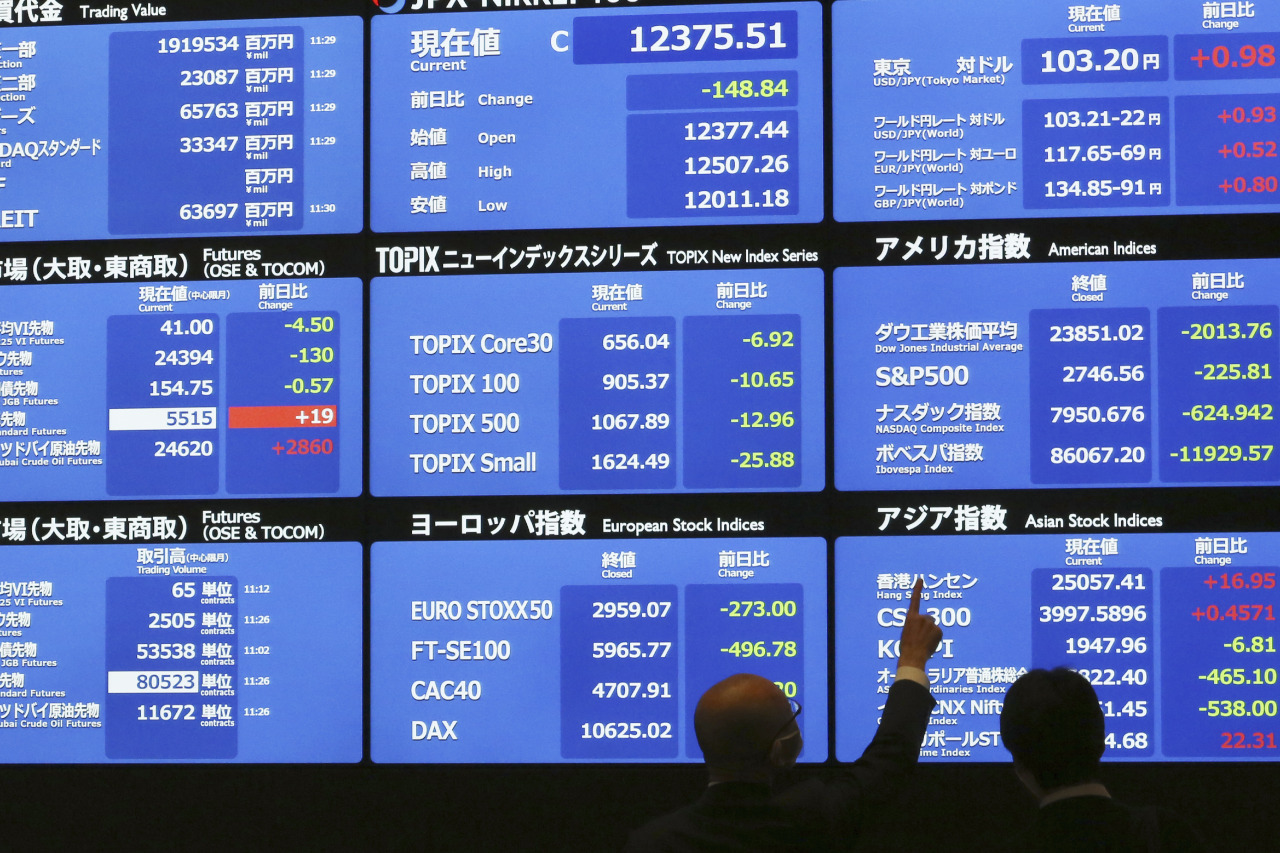 (AP-Yonhap)
TOKYO (AFP) -- Asian markets opened in freefall on Friday, extending a global rout that saw bourses experience their worst day in decades on fears of a recession caused by the coronavirus pandemic.

Tokyo's benchmark Nikkei index nosedived more than seven percent shortly after the open, with markets around the region plummeting after a historically bad trading day in the US and Europe.

London also had its worst day since the 1987 crash and Frankfurt its blackest day since 1989, the year the Berlin Wall fell.

Analysts said President Donald Trump's announcement of a ban on travel to the US from Europe deeply rattled investors, and measures intended to shore up business and markets were proving insufficient.

"The turmoil in markets has moved up another notch over the past 24 hours with President Trump's European travel ban and underwhelming stimulatory measures adding more fuel to the fire of uncertainty, instead of providing a dose of reassurance," wrote National Australia Bank's senior FX strategist Rodrigo Catril.

"New containment measures to slow the spread of COVID-19 have increased the prospect of a severe global economic growth downturn," he added.

The spread of the virus, now deemed a pandemic by the World Health Organization, has sparked unprecedented measures around the world.

Italy is effectively closed for business, while many countries have urged schools and businesses to shut down.

The travel industry has suffered a body blow as new restrictions prompt mass cancellations, while sporting events have been scrapped and everything from museums to Disney theme parks have shut their doors.

The crisis has raised fears of a global recession, with significant uncertainty about how bad the economic fallout might become.

"In mere weeks, the market has shifted gears from a transitory health scare to a full-blown global recession," wrote Stephen Innes, chief market strategist at AxiCorp.

"Global supply chains are no longer just 'disrupted' but are now in the process of shutting down completely," he added.

"And even more worrisome is that the worst-case scenario and the sum of all fears are culminating with the view that policymakers remain well behind the curve."

The markets have also been shaken by an oil price war between Saudi Arabia and Russia, compounded by fears that travel restrictions will further dampen energy demand.

In early Asian trade, West Texas Intermediate was down 0.5 percent at $31 a barrel while Brent crude slipped 0.3 percent to $33 a barrel.