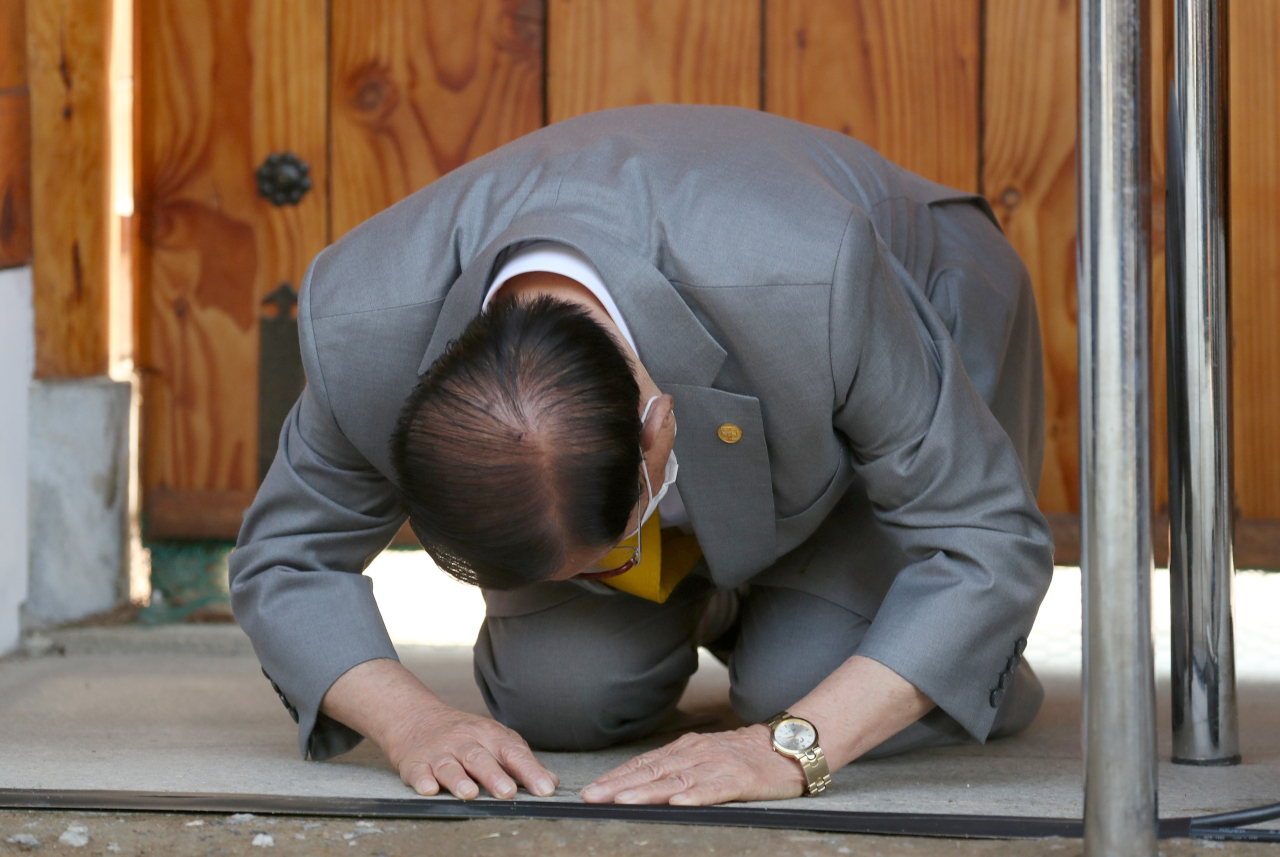 
Shincheonji founder Lee Man-hee, the figure at the center of the spread of COVID-19 in Korea, refused to answer a question about eternal life, concerning a claim he is said to have made to his believers, during a press briefing held in Gapyeong, Gyeonggi Province, Monday.

As of 4 p.m. on Monday, the number of novel coronavirus patients had jumped to 4,335 in Korea with more than half of the patients either Shincheonji Church of Jesus followers or those who had contact with them.

Before the briefing in front of the church’s training center in Gapyeong, the Shincheonji Church of Jesus announced that results of a COVID-19 test conducted on Lee at an undisclosed location in Gyeonggi Province came out negative.

With the religious group singled out as the main nexus of the spread of coronavirus in the country, there is growing curiosity about Shincheonji, which has remained largely secretive until the coronavirus outbreak forced the group to come out.

Shicheonji’s beliefs all come down to one man, Lee Man-hee, 88, who founded the church in 1984.

Lee was born in Chungdo, South Gyeongsang Province, in 1931. Lee played a part in diverse religious groups that are regarded as heretical by mainstream churches.

According to sources, he first joined a religious group in 1957, thinking it would help him cure his leprosy, also called Hansen’s disease.

In 1967, Lee became a believer of a religion called Temple of Tabernacle of Yoo Jae-yeol, also known as Jangmakseongjeon. Yoo, who led the group, was arrested for fraud in 1975. The failure of the central prophecy of this religious group -- that the end of the world would come in November 1969 -- led to the disintegration of the group.

Lee then joined the Solomon Creation (Changjo) Church, which is another religion declared heretical by mainstream churches. This religion claimed that the end of the world would come in March 1987.

“After going through these different religious groups, Lee created Shincheonji. This is why Shincheonji’s religious doctrine has bits from different religions,” official of National Solidarity for Sincheonji Victims Hong Yeon-ho told The Korea Herald. “Instead of fixing the date of the end of the world, Lee claims that if 144,000 followers who are in accordance with God gather, the end of the world will come and they will be the only ones who will have eternal life and survive.”

In other words, Shincheonji claims that Lee is the last prophet, who will save the 144,000 people.

“They say that it is OK to lie when spreading their beliefs,” Hong added.

Lee on Thursday issued an official statement to Shincheonji followers regarding the ongoing spread of the novel coronavirus, in which he said, “The ongoing situation is part of what is already written in The Book of Revelation, and these difficulties are part of the flow to achieve its goal (of reorganizing the world around the 144,000 people).”

The religion has 12 branches nationwide and also has churches outside Korea, with over 200,000 followers in Korea and 33,000 followers overseas.

Meanwhile, Lee’s common-law wife, Kim Nam-hee, who claims she is no longer a Shincheonji believer, recently appeared on the YouTube channel “Jon Jon TV” and said, “He is a fraud who is using God and religion.” Lee and Kim met in 2002.