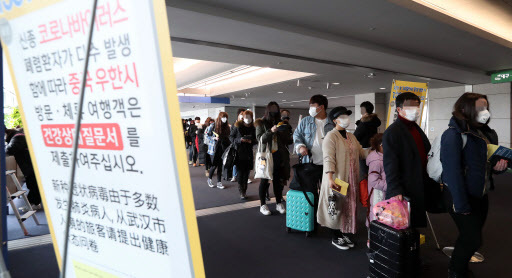 (Yonhap)
Fears multiplied in South Korea on Tuesday over a deadly coronavirus outbreak in China, with more people wearing masks in public and many calling for a ban on visitors from China, as well as for a delay in the reopening of schools after a monthlong winter vacation.

So far, four people in Korea -- three Korean nationals and one Chinese -- have tested positive for the new virus, which originated in Wuhan, central China. China had reported 106 deaths and more than 4,500 cases as of Tuesday afternoon.

Parents voiced concerns about their children’s safety in classrooms as schools started to reopen Tuesday.

“We were informed by the school that we should wash our hands and wear masks when going outside,” said a 39-year-old mother, whose 8-year-old child goes back Wednesday.

“But I am not sure whether the children can be effectively controlled when they gather inside the school,” she said. “Even though children wear masks outside, they don’t wear them inside classrooms. If not told, children usually don’t wash their hands either.”

Some 2,100 parents signed petitions demanding that the Seoul Metropolitan Office of Education postpone the reopening of schools.

The education office said Tuesday that it was seriously considering issuing a recommendation that schools extend the winter break or cancel classes. Individual schools would be able to choose whether to comply. Close
consultations are underway with relevant ministries, according to the office.

The Ministry of Education said it was not considering putting off the reopening of schools at this stage.

The ministry earlier in the day held a meeting and advised students and teachers who had visited China’s Hubei province to isolate themselves and refrain from attending school. It also asked schools to refrain from holding mass events such as graduation ceremonies.

Language courses for foreign students at local universities, including Yonsei University and Korea University, were canceled.

“I am reluctant to go outside and visit crowded places. I try to wear a mask and wash my hands more,” said Choi Da-som, a 29-year-old office worker in Seoul.

Public safety concerns intensified as two of the latest patients diagnosed with the virus were found to have passed screening at airports and led normal activities in public for days without their conditions being detected by health authorities.

Some 172 people have come into contact with a 55-year-old Korean man who tested positive Monday, according to the Korea Centers for Disease Control and Prevention on Tuesday.

The man, who showed no symptoms of infection upon arrival at an airport Jan. 20, traveled from the airport to his home in Pyeongtaek, Gyeonggi Province, by airport limousine and taxi, and took a bus to a hospital in the city.

Paik Young-jin, 48, who was going to work with a protective mask on in central Seoul, also said it was inconvenient to wear masks, but he was doing so for others.

“I get irritated when others start to cough around me, so I think I should wear it whether I like it or not,” he said. “I think the government should take drastic measures -- such as prohibiting the entry of people traveling from China -- to effectively curb the spread.”

More than 510,000 people signed a petition on the presidential office’s website calling on the government to turn away visitors from China at the airport as a “preemptive measure.”

“To be honest, I don’t want to run into Chinese tourists and students as it may be possible they entered Korea carrying the virus,” said Park Sung-joon, 31, who had just bought a box of masks. “I hope the government conducts a thorough check on everyone entering Korea from China.”

The government said Monday that it was not considering imposing an entry ban on travelers from China.

The government has scrambled to contain the spread of the virus by taking measures including thorough checks of some 3,000 people who entered Korea from Wuhan over the past two weeks, as well as sending charter flights to evacuate Koreans living in the Chinese city.

The sentiment was also strong online, where people shared information about the coronavirus.

According to Global Bigdata Research, the number of posts about the Wuhan coronavirus on social media and other online channels has skyrocketed over the past week. On Monday alone, the number reached 65,000, double what it was a day earlier.

In Korea, a total of 112 people had shown symptoms of the virus as of Tuesday morning. Fifteen people are in isolation and awaiting test results, and the remaining 97 have tested negative, according to the public health agency.