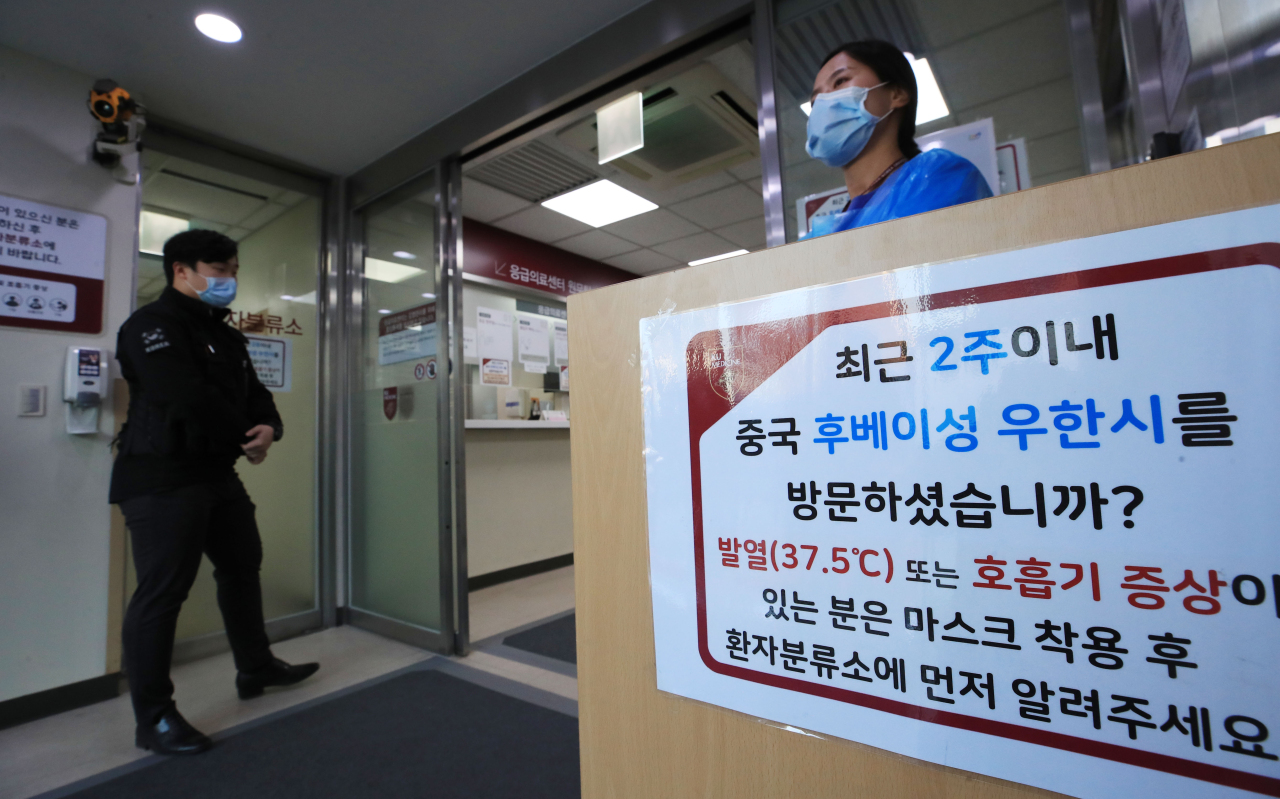 A notice with instructions for people displaying symptoms with a history of visiting Wuhan within the past two weeks is seen at an emergency room at a hospital in Seoul on Wednesday. Yonhap
South Korea is ramping up efforts to fend off a new coronavirus spreading fast in China, with an influx of Chinese tourists expected here for this week’s Lunar New Year holiday. The coronavirus has killed nine so far.

The country’s health authorities, airports and other related agencies are on heightened alert, with President Moon Jae-in ordering “full quarantine and preventative measures” to prevent the spread of the coronavirus here, in an emergency briefing on Wednesday afternoon.

As of 4 p.m. Wednesday, Korea has one confirmed case of the virus -- first identified in Wuhan, China -- and is awaiting results on four suspicious cases, the Korea Centers for Disease Control and Prevention said.

Three of those being tested had contact with the Chinese national confirmed to be infected with the coronavirus on Monday. The fourth individual came to the authorities’ attention after the person contacted the KCDC call center.

After the first confirmed case, Korean authorities have stepped up response measures, and individuals who show symptoms such as fever and coughing within 14 days of visiting the Chinese city are being tested for the virus.

The KCDC said that more stringent measures are being applied to those who have come into contact with individuals confirmed to be infected.

The authorities have so far identified 16 people in Korea showing symptoms associated with infection by the virus. Of that number, one is the Chinese national confirmed to be infected, who is being treated in quarantine, while others have tested negative.

In addition, 33 people are being monitored by the authorities.

The discovery of the infected Chinese national -- a Wuhan resident who entered Korea on her way to Japan -- has prompted top Korean officials to call for rapid response measures.

On Wednesday, Cheong Wa Dae revealed that President Moon had received reports on the developments and ordered concerned government organizations to step up quarantine and preventive measures.

In China, the virus is spreading, with 309 confirmed cases as of Wednesday. Chinese authorities have confirmed that the virus can be transmitted between people.

In addition to China, two people in Thailand, and one each in Japan, Taiwan and the US have been confirmed to be infected with the virus.