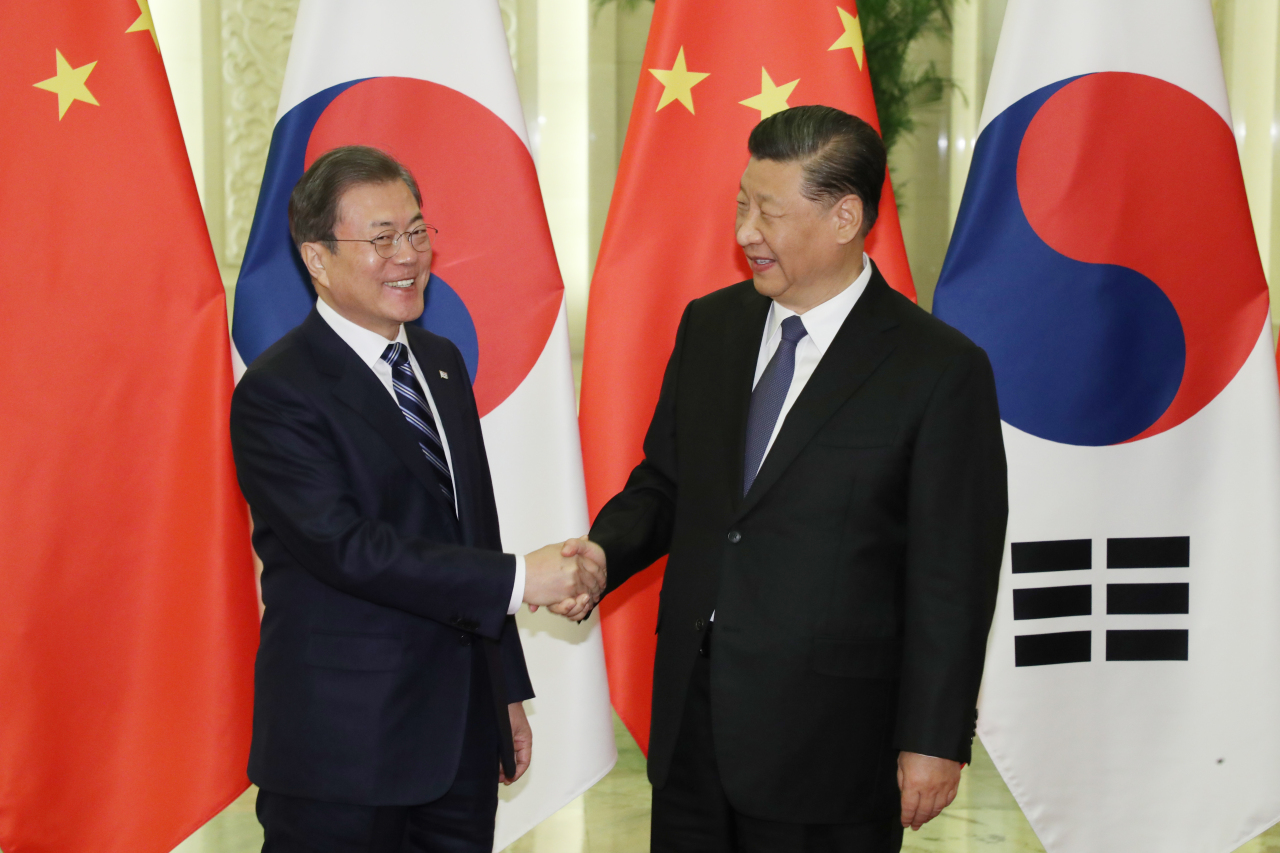 President Moon Jae-in and Chinese President Xi Jinping shake hands ahead of the summit meeting in Beijing on Monday. Yonhap
Going into the meeting held in Beijing, Moon stressed the importance of Seoul-Beijing relations, saying that the two countries cannot move far apart despite temporary differences, going on to express hopes for stronger cooperation.

“As China’s dreams present opportunities for Korea, I hope that Korea’s dreams will also aid China,” Moon said. Citing the agreement to seek ways to cooperate in areas related to Seoul’s New Southern Policy and New Northern Policy, and China’s “One Belt, One Road” policy, Moon said the two sides should seek to create a synergy effect.

“The recent developments of North-US dialogue being halted and tension on the Korean Peninsula rising is not beneficial for our two countries, nor for North Korea,” Moon said.

“I hope (for Seoul and Beijing) to work more closely so that the opportunity can lead to results.”

The Moon administration has been stressing China’s role in bringing North Korea to the negotiation table with the US, which has been highlighted with Pyongyang stepping up the pressure on Washington in recent months.

In addition to North Korea, it has been speculated that the Terminal High Altitude Area Defense anti-missile system will be atop the agenda for the meeting.

The THAAD system was deployed in South Korea in early 2017, sparking strong protests from Beijing. The Chinese government’s opposition to the deployment led to a number of retaliatory measures, the hardest blow of which was dealt to South Korea’s tourism industry. In response to THAAD deployment, China imposed a de facto ban on group tours here, significantly reducing Korea-bound Chinese tourists.

The Chinese leader also touched on economic and security issues in his opening comments, and hinted at cooperation in global issues.

“China and Korea have presence and influence in Asia, and in the world beyond,” Xi was interpreted as saying.

“We share views in a wide range of areas such as promoting peace, security and prosperity in the region, and defending multilateralism and free trade.”

From Beijing, Moon left for Chengdu, where he was set to meet with Chinese Premier Li Keqiang later in the day.

On Tuesday, Moon will sit down with Li and Japanese Prime Minister Shinzo Abe for a trilateral summit, and hold a Korea-Japan bilateral summit later in the day.

Moon’s meeting with Abe, their first since September 2018, has sparked hopes for a chance to improve strained bilateral ties.

While Cheong Wa Dae said that the meeting being arranged has significance in itself considering recent difficulties, it appears unlikely that the summit will lead to major changes in the two countries stance on the root cause of bilateral troubles.

Japan’s trade curbing measures were implemented following the Korean Supreme Court’s ruling that backed Koreans who were forced into working for Japanese firms during Japan’s occupation of the Korean Peninsula in the first half of the 20th century.

Seoul maintains that the Supreme Court ruling must be respected, and that compromise -- including the “Moon Hee-sang plan” -- is not possible without the consent of the victims

The Moon Hee-sang plan, named after the South Korean National Assembly speaker, suggests compensating the victims with donations from Korean and Japanese companies and citizens.