Bukhyung is a bright, inviting restaurant with a vintage vibe that sits among trendy eateries and cafes in Songdo’s multiplex shopping center Triple Street. However, its specialty -- North Korean home-style meals -- does not conform to South Korea’s fast-changing food trends.

Past the lunch peak hours on Monday, it looked like any other casual dining place found in the South -- even the few North Korean propaganda-style posters hanging on the walls could be seen as pop art. 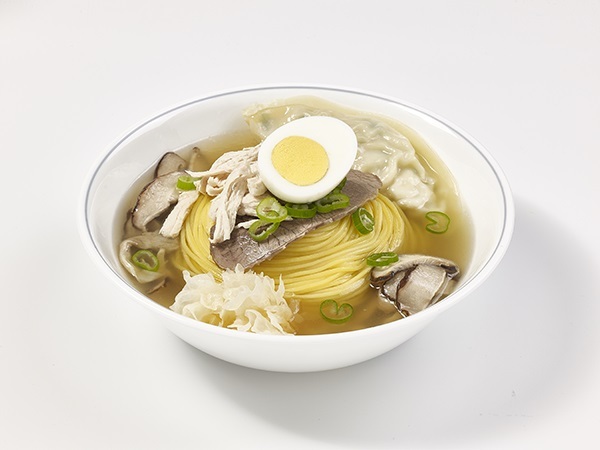 If you prefer noodles over rice, go for onmyeon. (Bukhyang)

The most popular dish, according to the menu, is the 14,000 won onban set, which features a big bowl of onban, a small plate of spicy pork shoulder chops and three side dishes.

The warm and comforting food does not overwhelm you with strong spices like many contemporary South Korean dishes.

“Bukhyang pursues healthy tastes focusing more on ingredients than spices, plus comfortable settings and reasonable prices,” the restaurant says on its website. 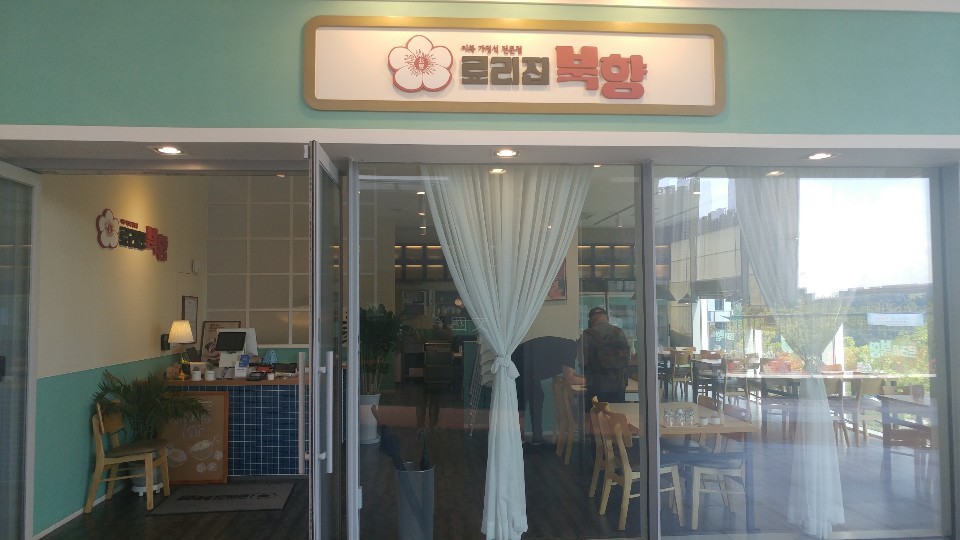 Neungra Bapsang, located at the heart of the Jongno area, allows diners a peek into the culinary scene of North Korea.

A server, with a heavy North Korean accent, hands out the menu. The listed dishes range from everyday homely meals to special delicacies of North Korea, including cold noodles and dumpling soup. 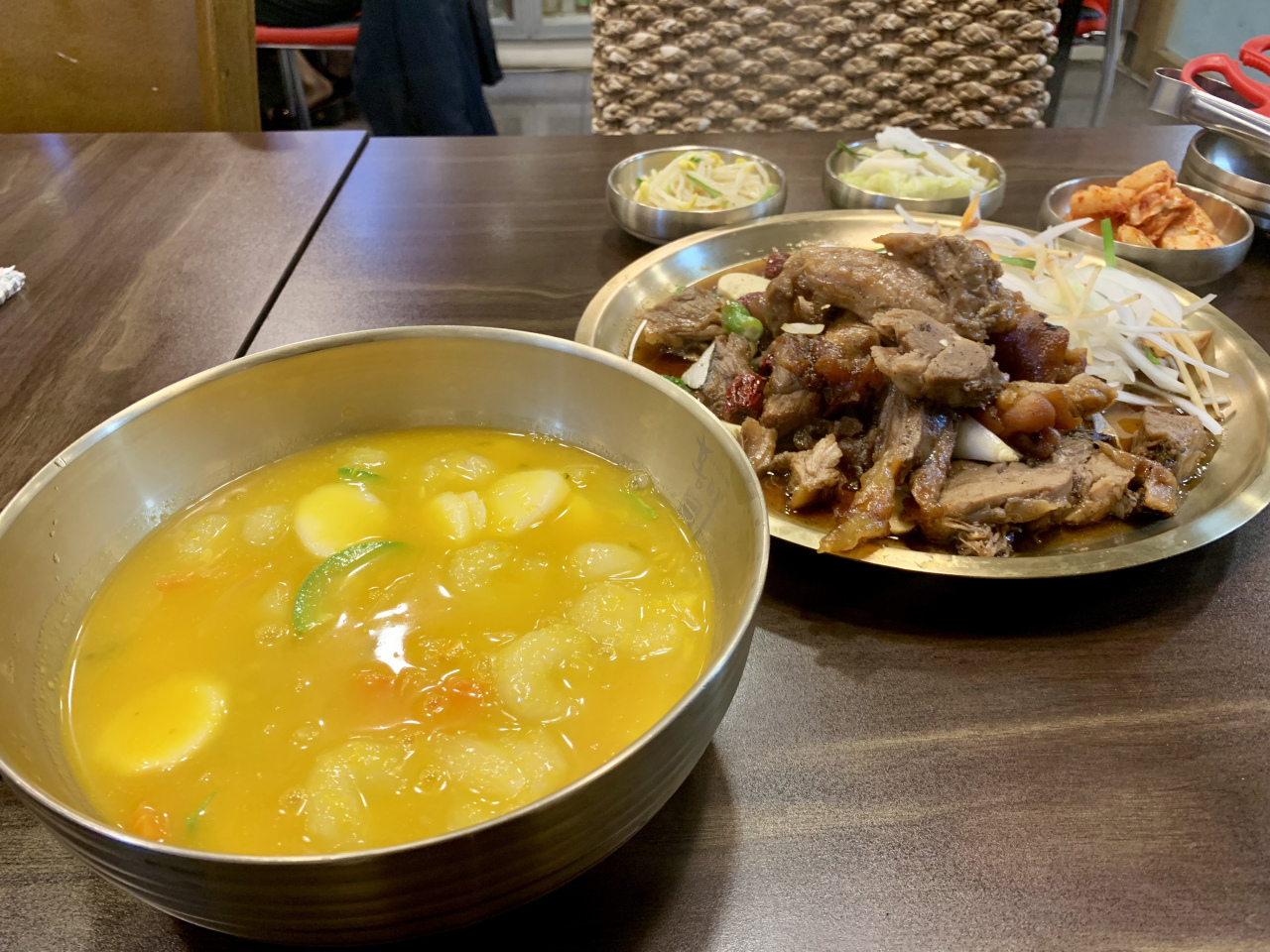 Priced at 10,000 won ($8), the soup is similar to sweet pumpkin soup, but the broth is more watery. Water in the grated potatoes is removed, and they are then shaped into dough balls, finally joined with slices of rice cake in the pumpkin broth.

Another dish on the menu is steamed pig’s leg. According to the menu’s description, North Korea’s high-ranking government officials like to pair it with drinks.

It greatly resembles South Korea’s jokbal, braised pig’s feet, visually and in taste. It has the savory pork taste with a hint of sweetness, and the exceptional collagen-filled skin texture. But unlike jokbal, the meat is paired with raw sliced onions. 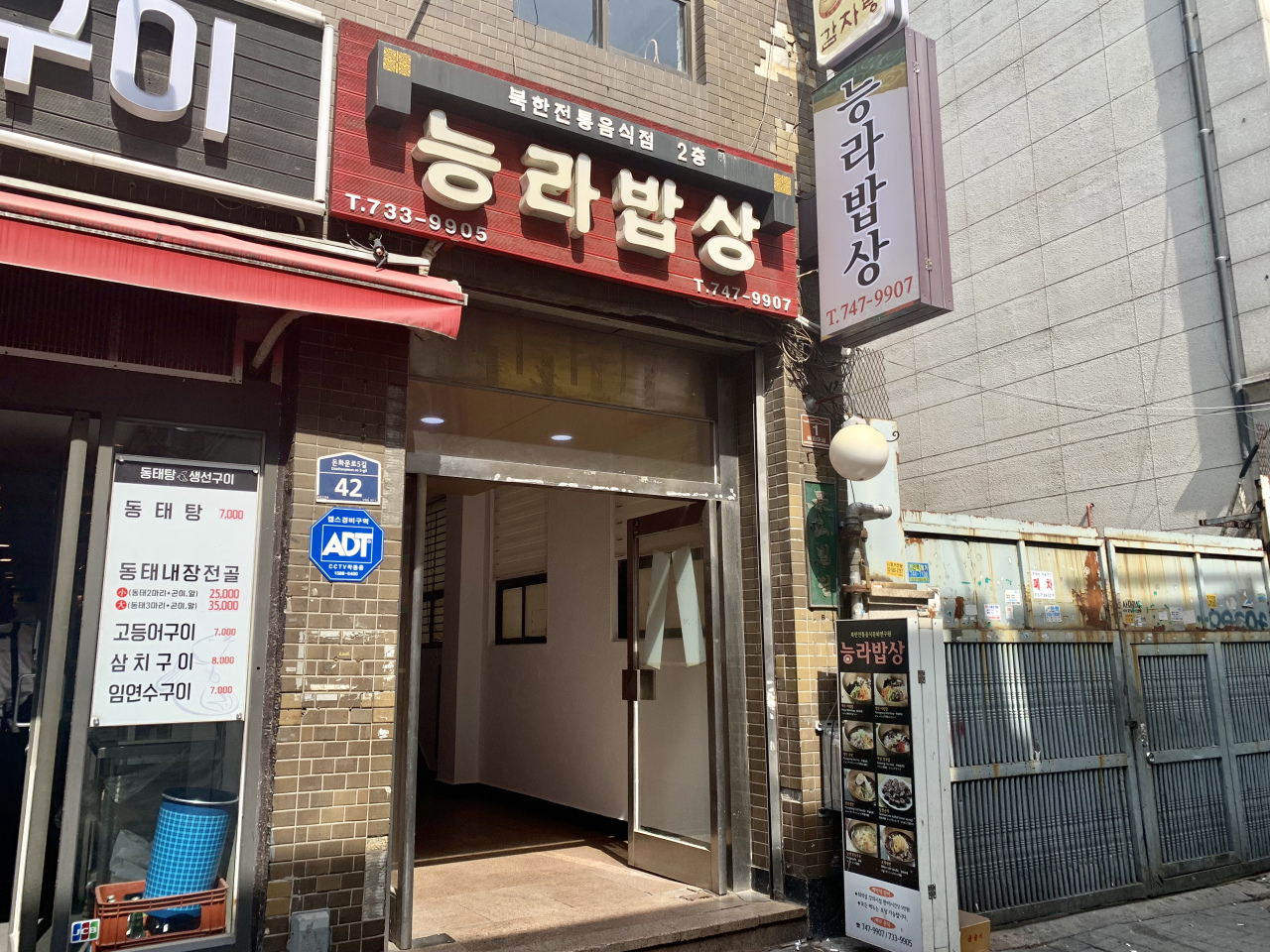 The entrance of Neungra Bapsang in Jongno 3-ga, central Seoul. (Im Eun-byel/The Korea Herald)
The restaurant is run by North Korean defector Lee Ae-ran, who is known to be the first female defector here with a doctorate degree. She graduated from the Department of Food and Nutrition at Ewha Womans University.

Dongmu Bapsang looks pretty shabby to be the only restaurant in South Korea helmed by a former chef of North Korea’s prestigious Okryukwan. The Pyongyang restaurant, after all, has a reputation here as the finest dining experience in the North, and its cold noodle soup, naengmyeon, was the star of the luncheon between leaders of the two Koreas during their summit meeting last year.

Naengmyeon is the main strength of Dongmu Bapsang owner and chef Yoon Jong-chul. 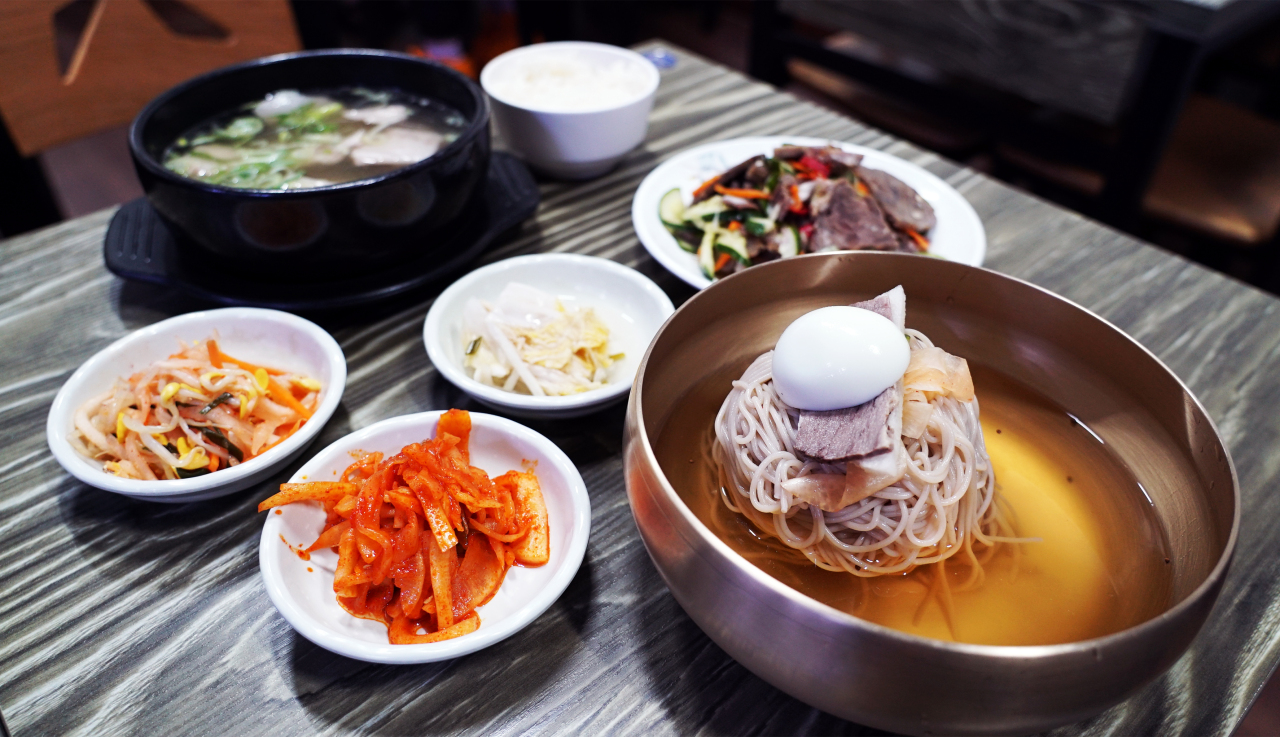 Naengmyeon is priced at 11,000 won ($9.20). (Choi Ji-won/The Korea Herald)
“The so-called ‘Pyongyang-style’ naengmyeon here is far from the original,” he said, adding that he sticks to the Okryukwan recipe from his short stint there in the 1970s.

He was trained in Okryukwan for four months before moving on to cook for a decade at a military restaurant exclusively operated for general-levels officers. Yoon escaped the North in 1998 and came to South Korea via China in 2000.

With the noodles made of high buckwheat content and chilled beef broth of an almost bland taste, Yoon’s rendition is mild and simple, with a dozen perilla seeds and a few slices of beef shank as garnish.

“The aromatic taste that spreads inside the mouth as you bite the seeds completes the flavor of the dish,” Yoon said. The naengmyeon is priced at 11,000 won ($9.20).

The most expensive item on the menu is eobok jaengban, a boiled meat platter with various cuts of beef and an assortment of vegetables and dumplings, at 80,000 won per plate. Enough to be shared by three or even more, it is served on a large brass tray and is simmered in clear brisket broth at the table. Yoon comes by the table to pour the broth from a kettle, making sure the meat and vegetables remain doused in the soup. 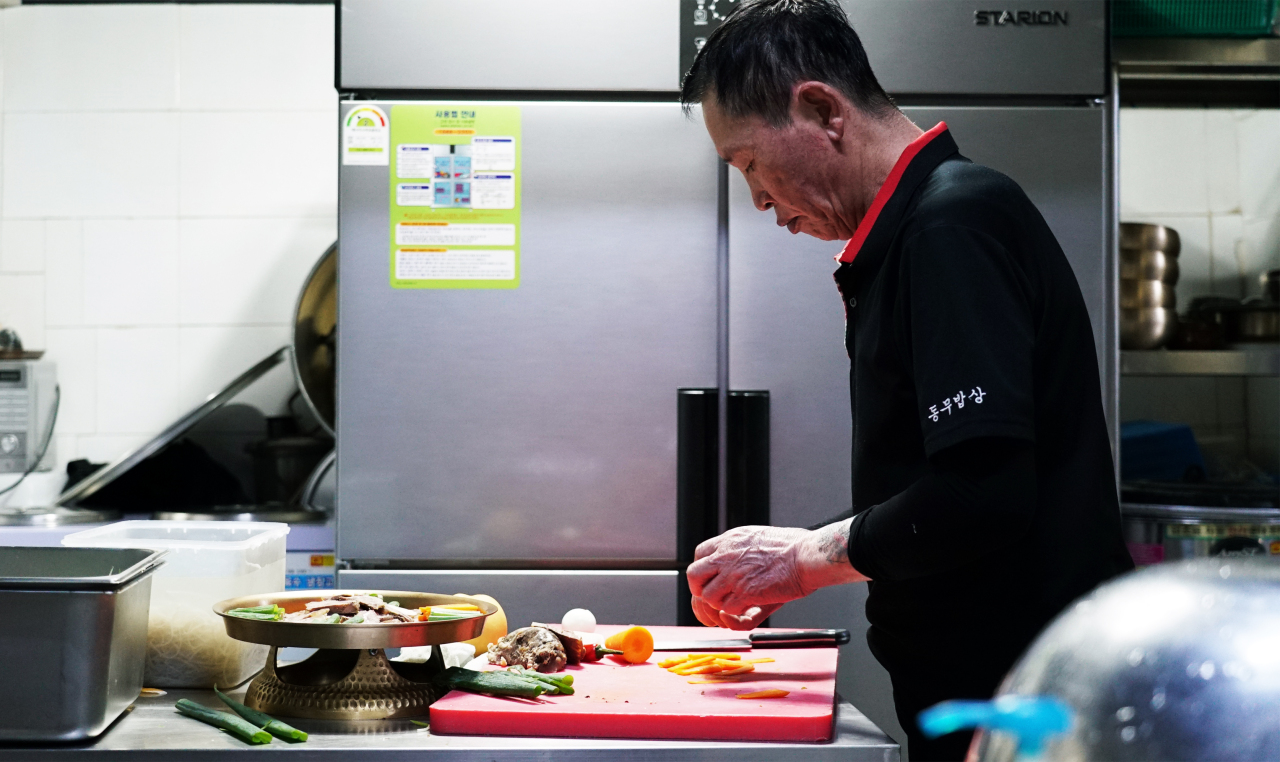 “Unlike in the South, vegetables are only found in their seasons in the North. When we make the regular cabbage kimchi in December, they would be all gone by March.” People in the North typically grow bean sprouts at home to use for kimchi as well. According to Yoon, these sides are what North Korean defectors identify as the real tastes of nostalgia.

Dongmu Bapsang is located in the Hapjeong-dong area of Mapo-gu in western Seoul.