Here’s a guide on what to do, from a horror-themed bus tour of night-view spots in Seoul to festivals that blend music, food and a cool summer vibe. 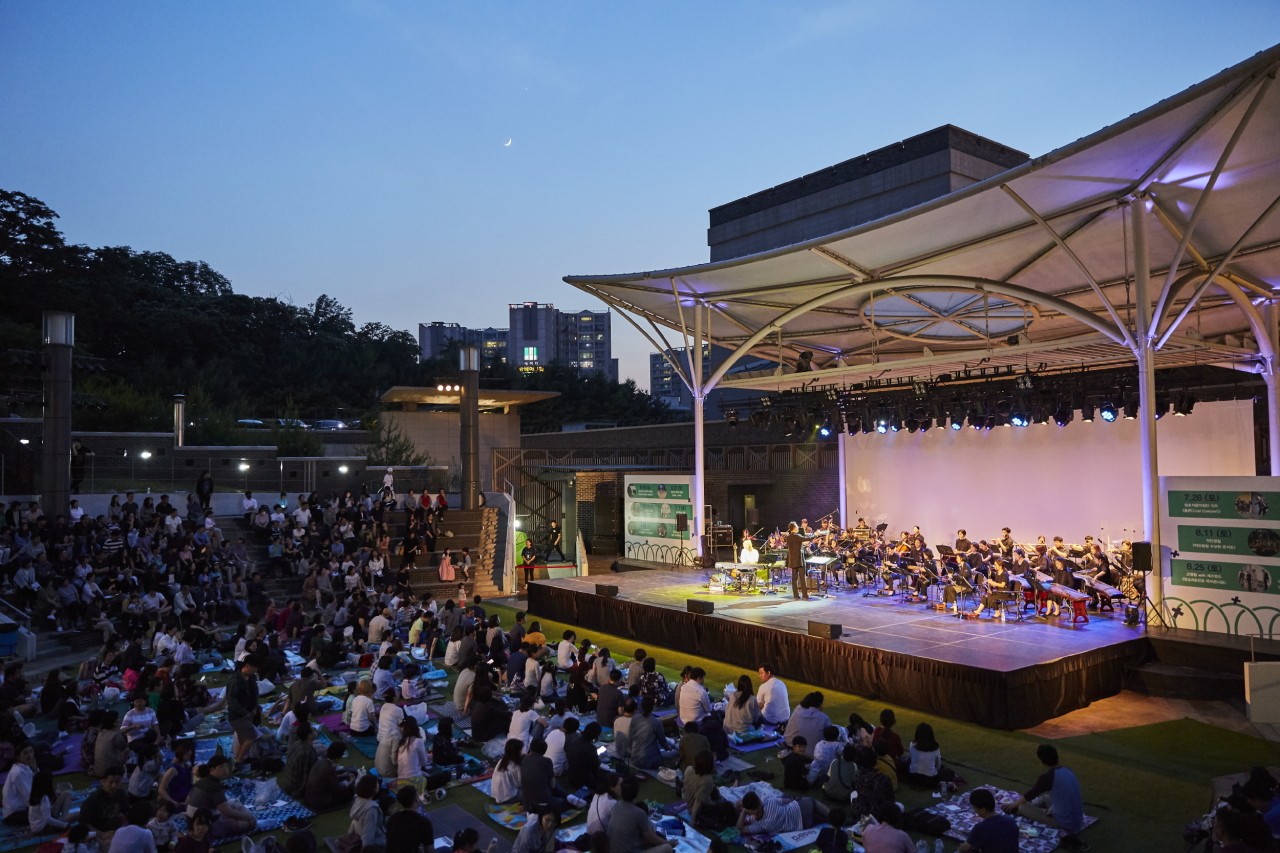 Plan a Saturday evening outing to the Seoul Arts Center and the adjacent National Gugak Center at the eastern tip of the capital city for a mix of nature, arts and music.

This season, there will be a series of free, outdoor concerts on Saturday evenings at the two centers nestled at the foot of Umyeonsan.

From 6:30 p.m. on Saturday, two musical acts will be busking at the Seoul Arts Center’s outdoor stage, to be followed by an open-air screening of a filmed 2017 concert performance by chamber ensemble DITTO, led by renowned violinist Richard Yongjae O’Neill.

The busking is a weekly event, part of the ongoing “SAC Festa” program running through September. The screening takes place on the first and third Saturdays of the month. The Aug. 3 edition will feature a Japanese theatrical production of “Pinocchio.”

Aside from music, there will be food trucks, an art market (from 1 p.m. to 6 p.m. on the second and fourth Saturdays only), an art experience zone until 8 p.m., a fountain water show and a nice lawn to just sit and relax.

Those interested in a more uniquely Korean experience should check out the National Gugak Center, just a few minutes’ walk from SAC, for a series of performances based on traditional music, gugak.

The first show, to take place at the outdoor concert hall at 8 p.m., features the state-run center’s own Contemporary Gugak Orchestra performing tunes from popular animated TV series. The next edition on July 27 will showcase traditional mask dances of different regions of the country.

“We hope that through this summer night festival, more people will discover the beauty of gugak,” said Lim Jae-won, chief of the National Gugak Center.

All programs are free of charge, but require booking in advance. Some dates are already fully booked. To check ticket availability, visit https://booking.naver.com/booking/12/bizes/241695?area=bni (Korean only) or call 02) 580-3300. 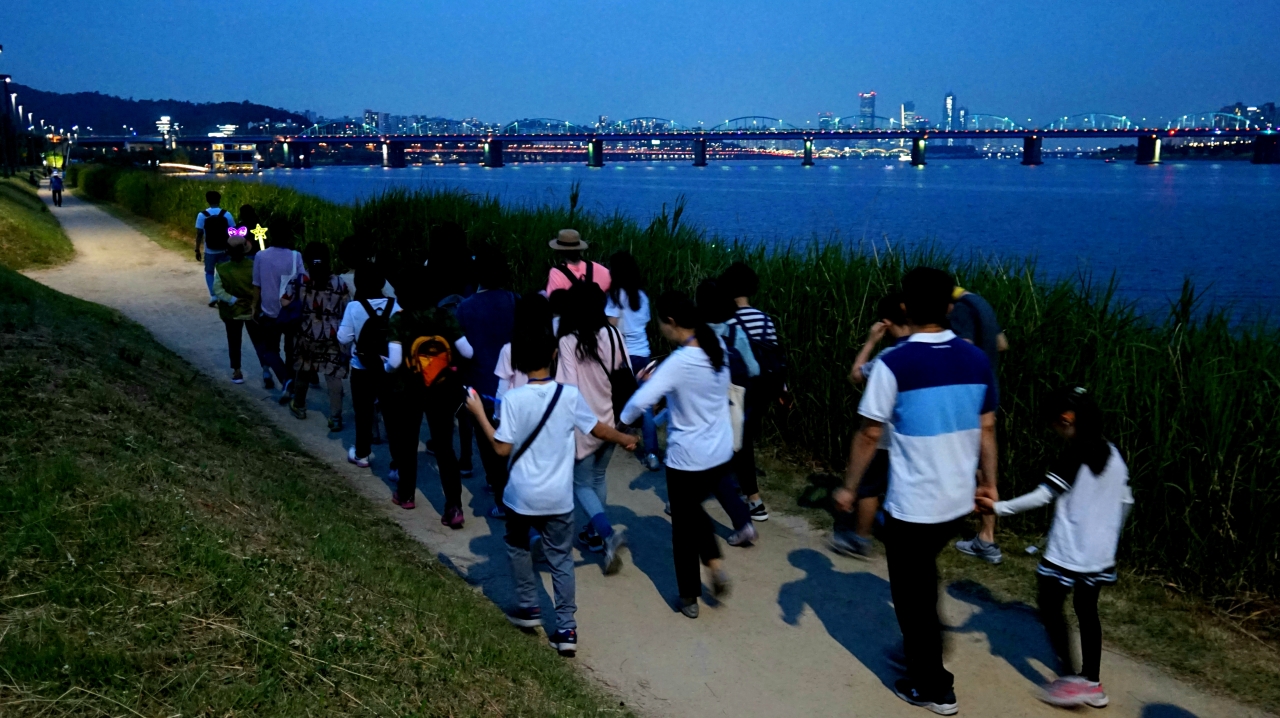 Take a stroll by the Han River to cool down and enjoy the beautiful nighttime view of Seoul. The city government is organizing a weekly walking excursion program of the riverside every Wednesday evening through the end of August. (Seoul Metropolitan Government)
By the Han River

Many Seoul residents head to the Han River on sleepless summer nights. Popular spots, such as Yeouido Hangang Park and Seonyudo Park, bustle with couples and families enjoying the beautiful night view of the city. They can often be spotted tucking into Chimaek -- deep-fried chicken and cold beer.

Another reason to visit the riverside area is the monthlong Hangang Summer Festival that starts Friday, offering performances, cultural events and activities.

From a nighttime circus show to a yoga and meditation session by the river, many activities are taking place across the 11 Han River parks throughout the festival.

Visit http://hangang.seoul.go.kr/project for more details. The website is available only in Korean for now, but English content is on the way.

Under the theme of “Hangang Date,” romantic events will be held on Saturday evenings, at Banpo Park on July 27, Yangwha Park on Aug. 3 and Mangwon Park on Aug. 10, including a yoga session, a drawing class and a massage class.

Free circus performances are slated for Aug. 15-17 on Sebitseom, an artificial island near the southernmost part of Banpo Bridge.

For those who want to explore the riverside, the Seoul Metropolitan Government has come up with 12 walking trails and offers a guided tour of the routes every Wednesday night until September.

Each tour is themed on a certain -- often historical -- aspect of the capital city and accepts a maximum of 50 participants, who must make reservations via the city’s social media channel.

On average, each trail is 8-9 kilometers long and takes 2 1/2 hours to complete. It typically involves the crossing of one or two bridges across the river.

“It is to encourage a culture of walking as a way to promote a healthier lifestyle among urban dwellers,” said Na Baek-ju, head of the citizens’ health bureau at the city government.

For those keen on walking, there is a 42-kilometer walkathon -- the fourth Hangang Night Walk -- slated for July 27. Check out http://nightwalk42k.co.kr/. 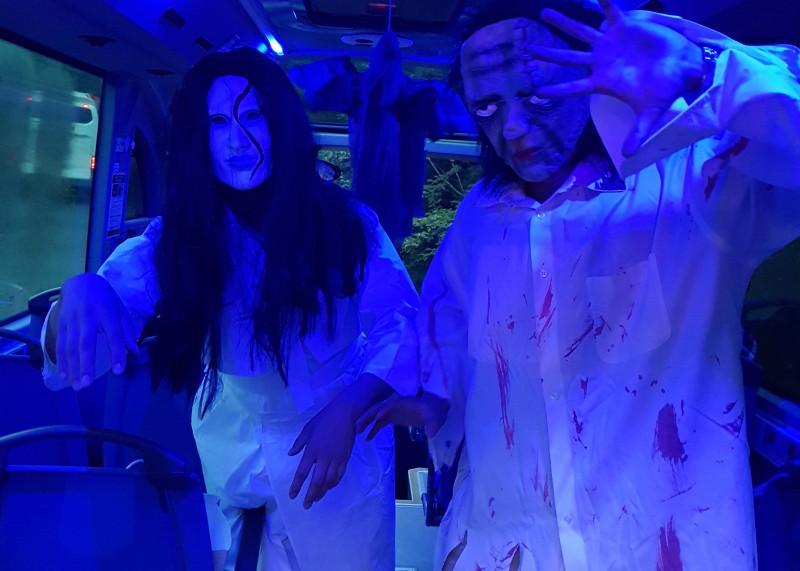 Ghosts and zombies are sought-after here in summer, as some people believe in beating the heat with spine-chilling experiences. Seoul City Tour Bus invites such thrill seekers to go on its nighttime trip.

Starting from July 26, the bus tour offers passengers a chance to experience a zombie apocalypse, on top of its regular tour of night-view spots in Seoul. Beware of actors and actresses waiting to scare you at some stops. The tour bus departs from Koreana Hotel in Gwanghwamun.

Meanwhile, in the southern city of Daegu, a three-day international festival slated to open Aug. 9 is all about the creepy and scary. There will be a ghost house, zombie makeup booths, street performances, theatrical productions by four international teams as well as an electronic dance music festival. For more information, https://www.facebook.com/DIHFesta.