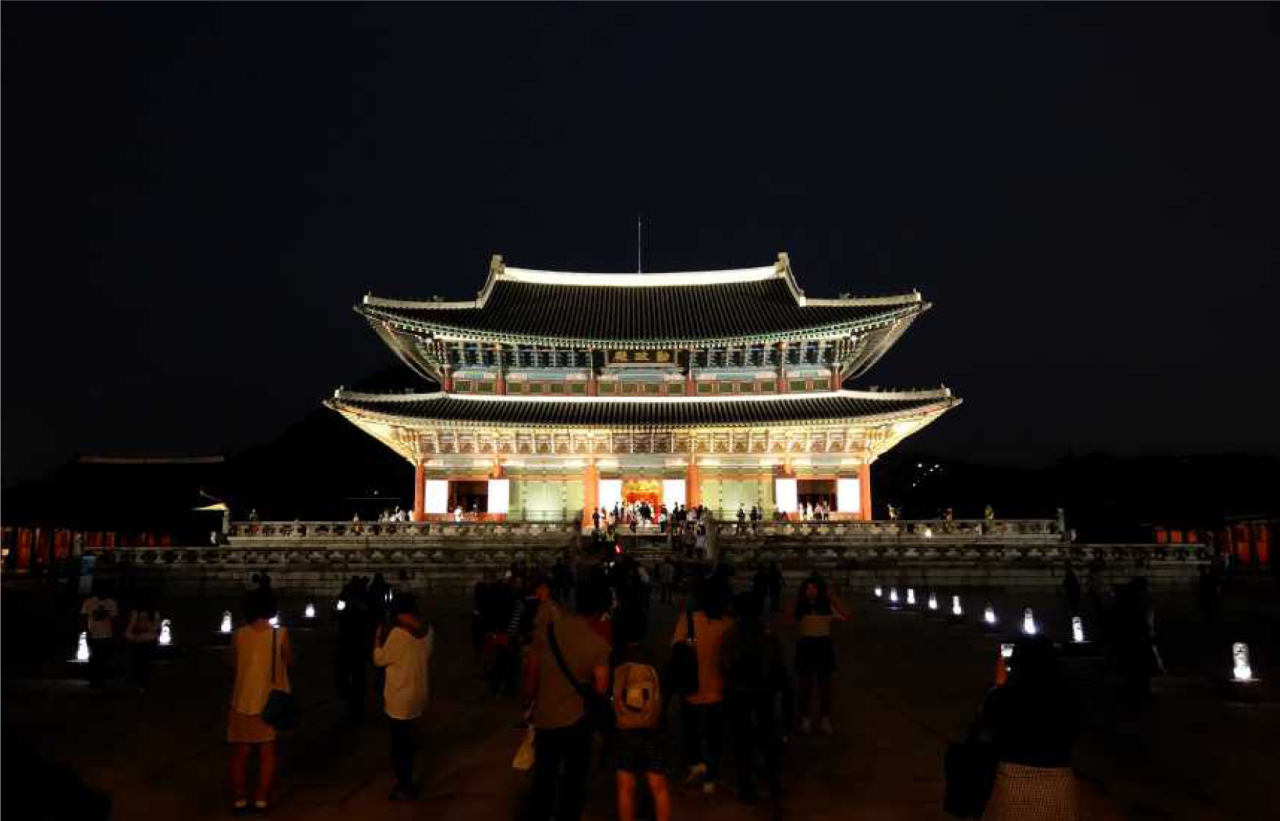 Gyeongbokgung’s magnificent main hall, Geunjeongjeon, is lit up to welcome nighttime visitors to the palace. (Cultural Heritage Administration)
On top of the beauty of centuries-old architecture majestically illuminated in darkness, the serene atmosphere in contrast to the modern skyscrapers beyond the palace walls offers a surreal experience.

Nighttime visits are only allowed on selected dates and for a limited number of people at some of Seoul’s five palaces from the Joseon era (1392-1910).

Gyeongbokgung, the most popular of the five, will remain open until 10 p.m. for two weeks starting Monday. A total of 4,500 visitors are allowed per day, with tickets at 3,000 won each.

Admission is free for people dressed in hanbok -- Korean traditional costume -- but under new rules, they must reserve free passes online and meet guidelines on their attire. Five hundred tickets are reserved onsite for foreign visitors. For more information, visit http://www.royalpalace.go.kr/.


The most popular nighttime program, Changdeokgung’s Moonlight Tour, will resume Aug. 22 and continue through October. Tickets go on sale Aug. 7 and are likely to sell out fast, as previous editions sold out in minutes. Only 100 visitors are allowed for each guided two-hour tour.

For those who do not want the hassle of booking in advance, Deoksugung and Changgyeonggung light up their paths till 9 p.m. every day, except Mondays. Admission is 1,000 won, and no reservations are needed.

On July 31, there will be a free, one-hour classical music concert at Deoksugung’s Western-style building Seokjojeon. Reservations are recommended.

The first 100 visitors at Changgyeonggung during the extended hours are provided with traditional handheld lanterns that have to be returned at the end of the stroll.

Meanwhile, BaekInje’s House in Seoul’s picturesque Bukchon area remains open until 9 p.m. on Wednesdays and Saturdays -- extended opening hours for summer. A well-preserved example of modern hanok built during the Japanese colonial era (1910-1945), the house, now a museum, has been featured in a number of Korean historic films. Call 02) 724-0200 for more information.


Outside Seoul, Suwon, a city in Gyeonggi Province, will hold a three-day festival from Aug. 9-11 around Suwon Hwaseong Fortress, designated as a UNESCO World Heritage site.

Built in the late 18th century, the stonewall fortress and the king’s temporary palace will be illuminated, with the facade adorned with media art. They will remain open until 11 p.m. during the festival.

A variety of events are also planned for the surrounding area, including a helium balloon ride over the fortress and cultural performances. Nighttime viewing of the fortress and palace and a docent tour are free of charge, but require booking.

The “Flying Suwon” balloon ride costs 18,000 won for adults and 12,000 won for children. For more information on the Suwon festival, visit http://www.swcf.or.kr/english/?p=66.