In an interview with a KBS1 radio show on Wednesday, the hanbok designer did not hide her negative feelings about the revealing, even suggestive, variations on the traditional costume. 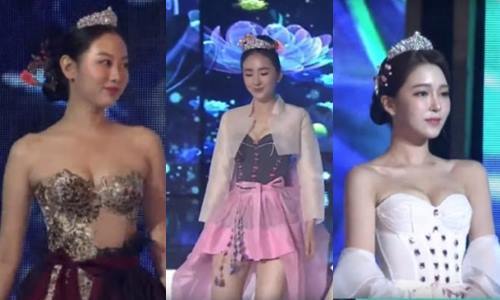 (Screen grab from video of 2019 Miss Korea)
“I’m not saying we should wear only the authentic versions displayed in the museum,” Park said. “But there could have been better ways to modernize the outfit without making viewers feel uncomfortable.”

Park was especially worried that contests like Miss Korea, which set standards of beauty in South Korea, could create misleading public perceptions of hanbok.

“Hanbok is a valuable heritage from our ancestors that we must protect. Contests such as (Miss Korea) should keep this in mind,” the designer said.

During the 2019 Miss Korea contest on July 11, the seven winners of last year’s contest appeared onstage clad in redesigned hanbok with corset-like tops and short dresses.

Although the host of the event described the modernized hanbok as having achieved “harmony between East and West,” the contest came under fire for sexualizing Korea’s traditional dress.