The crispy snack with its distinctive four-layered plates was among 17 food items recognized with the Hello Foods Prize at FBIF -- one of the leading food and beverage industry conference in the Asia-Pacific region. The prize is given to innovative products selected by 17 judges in the FBIF committee. 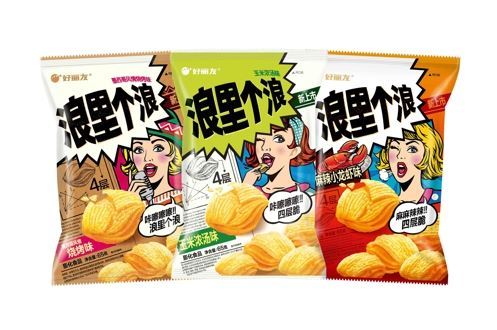 Chinese version of Turtle Chips, rebranded Langligelang (Orion)
Flavor, nutrition, and packaging were among aspects put to test. Turtle Chip stood out for its pungent flavors without being too greasy, and its crispy texture due to the four-layered plates, the firm said.

Turtle Chips has been a popular snack since its launch in 2017. In February, Orion obtained a patent for its manufacturing facility that develops the four-layered plates, giving it exclusive rights for the next 20 years.

Rebranded as Langligelang, the snack hit shelves in China last year and gained instant success by selling close to 60 million packets within a year.