[ The Korea Herald – Send E-mail ]
[Weekender] In love with #retro
Young hipsters’ curiosity drives Instagram-centric ‘new-tro’ fever
By Lee Sun-young
Published : Apr 5, 2019 - 10:14
Updated : Apr 9, 2019 - 14:49
Fashion trends come and go. What was once old-fashioned suddenly comes back in style, as nostalgia for the good old days brings back elements of the past.

But the latest retro trend here is being fueled more by curiosity than nostalgia, with its main followers being youths born and raised in this era of dizzying technologies.

Locally dubbed “new-tro,” this craze is reaching far beyond the boundaries of fashion and design. 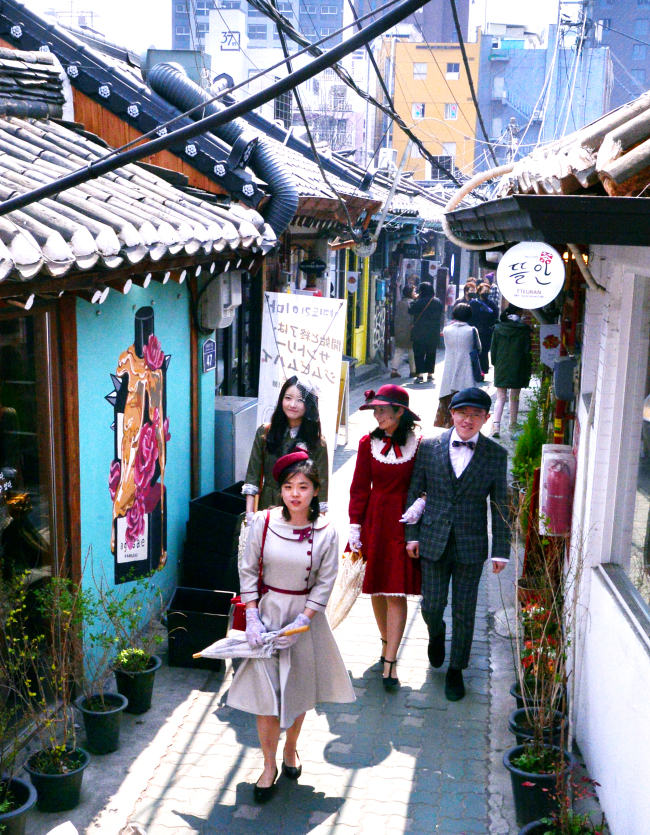 In Ikseon-dong, the retro mecca of Seoul, young people dressed up in retro style from head to toe has become an increasingly common sight. (Park Hyun-koo/The Korea Herald)
On Instagram -- the ultimate barometer for what’s hip -- #retro and #new-tro are among the hottest hashtags.

Retro-inspired cafes and restaurants, trending with those hashtags, are the places to be for snap-happy hipsters. Not surprisingly, brands are jumping on the bandwagon by jazzing up their products with a touch of history.

Food brand Samyang has reintroduced the Popeye noodle snack with star-shaped candies, which was hugely popular here in the ’70s and ’80s but had been discontinued. Meanwhile, Seoul Milk launched a series of “retro milk cups” with a big logo and the look of the company’s past freebie items.

In Ikseon-dong, the hippest street in Seoul right now, young people dressed in early 20th-century costumes can be seen taking selfies in the narrow alleys between traditional Korean houses repurposed into trendy cafes and restaurants.

At Lotte World, an amusement park in Seoul, a special photo zone has been set up to resemble Korea in the late 19th and early 20th centuries, in an apparent effort to generate social media buzz. Similarly, hotels offer “retro packages” designed to create a photo-worthy experience.

“What’s old is new to this young generation,” says Kim Nan-do, a Seoul National University professor who coined the term “new-tro” in his best-selling book series “Trend Korea,” co-authored by a team of experts in the field of consumer studies.

“(New-tro) does not stop at re-enacting the past. It goes further and reinterprets it from a present perspective for a generation that hasn’t lived it,” the professor says in the book.

“It is one of the anti-digital phenomena of this digital era in which things change so fast and get quickly forgotten,” he said.