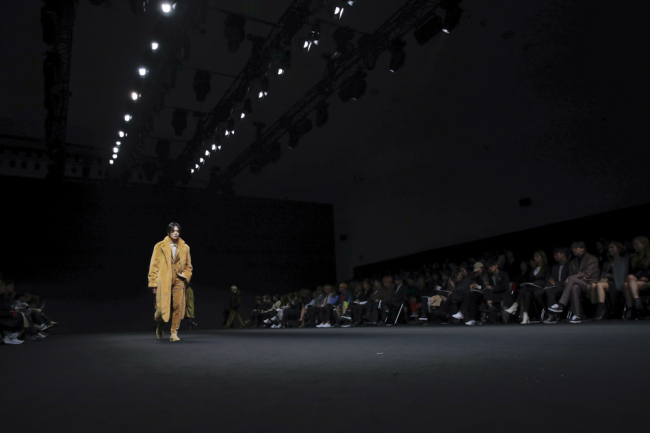 A model presents a creation by Blanc de Noirs on a catwalk at the 2019 fall-winter Seoul Fashion Week on Thursday. (Seoul Design Foundation)
Among designers, it is considered to be the standard path for brands to graduate from Generation Next, funded by the Seoul Design Foundation, and to move on to the Seoul Collection. Many prestigious designers, including YCH, Kye and more, have taken the step.

This season, Seoul Fashion Week has seen a group of four designers landing on the Seoul Collection runway, fresh out of the rookie league are Blanc de Noirs, Besfxxk, Daily Mirror and Maxxi J. 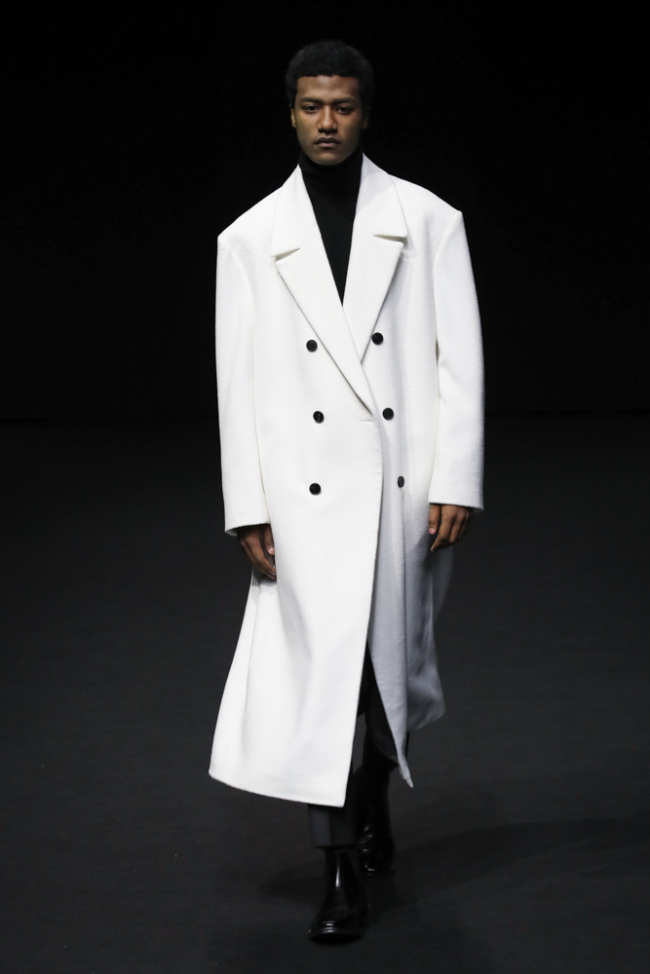 Park was originally a medical student who studied to become a doctor in the US. But he quit school and started a new chapter of his life to quench his thirst for fashion.

After staging three shows at Generation Next, Blanc de Noirs finally made its debut at the Seoul Collection this season. The debut collection was titled “To Infinity and Beyond,” reflecting the designer’s aim of growing and expanding from where the label stands now.

With Park’s design philosophy being about sticking to the basics, models donned well-tailored jackets, coats with classic silhouettes, sweaters of fine fabrics in a palette of white, black, camel and midnight blue.

In an era of deconstructive, experimental and maximalist fashion, the menswear collection was modest and plain. But it showed how clothing of fine quality can still make a scene on the catwalk. 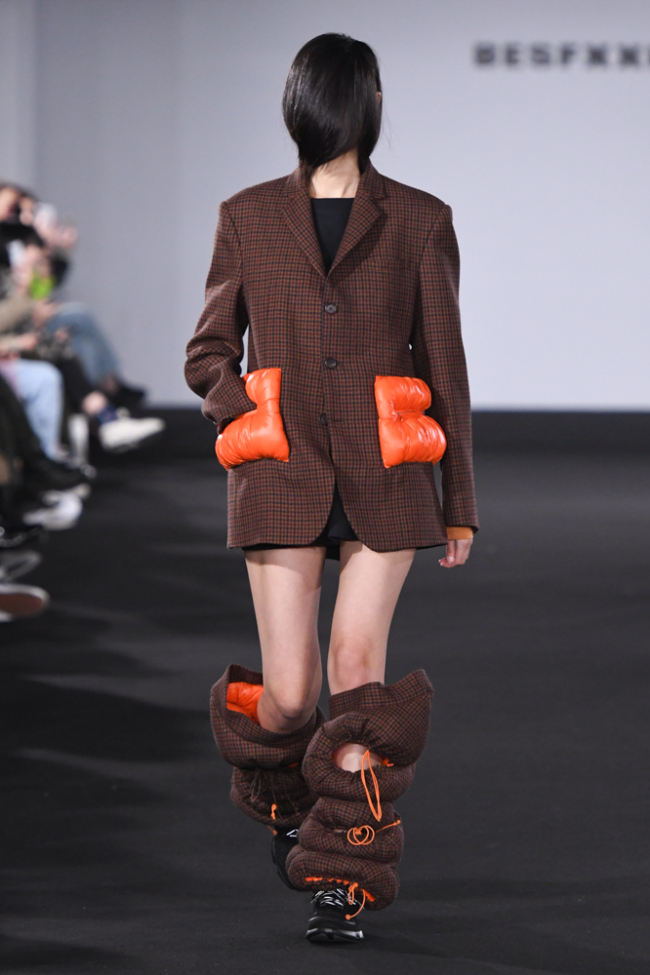 Besfxxk(Seoul Design Foundation)
Besfxxk delves into the heritage of British tailoring with a deconstructive approach, transforming an item’s structure and combining it with unexpected elements.

Designing duo Kim Bo-na and Lim Jae-hyuk launched Besfxxk in 2017 after studying fashion in London. The pair presented two Generation Next shows before making their debut on the Seoul Collection this March.

For this season, the label reinterpreted the concepts of “street style” and “classic look,” questioning the boundaries between the two. The creations were a retake on classics such as trench coats and check coats, blending them with sporty looks such as tracksuit fashion.

A series of tailored wear mixed with puffer jumper details were shown. Ordinary tailored jackets were decorated with neon puffer details added to the pockets and sleeves. 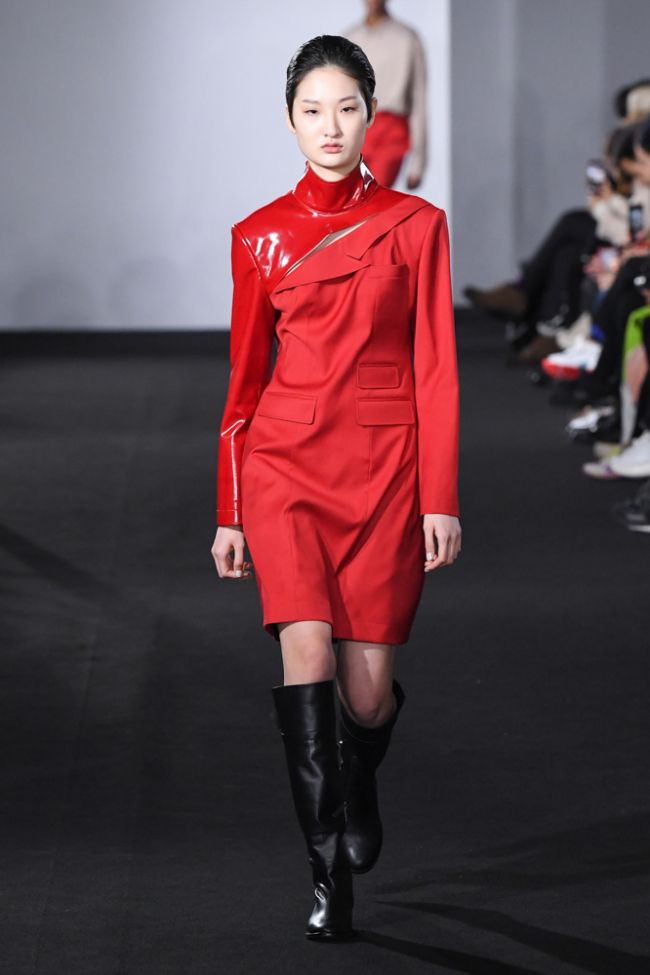 Daily Mirror (Seoul Design Foundation)
Daily Mirror labels itself as a brand that seeks out “new minimalism,” playing between the boundaries of masculinity and femininity. After three shows at Generation Next, Daily Mirror finally made it to the Seoul Collection.

Designer Kim Joo-han picked “Hide and Seek” as the collection theme this season, encouraging the audience to find the details hidden in his creations.

In an era of fast fashion, Kim wanted to point out that fashion is now used as a commodity to show off on social media, leading to a lesser number of well-made garments. In turn, for Daily Mirror’s fall-winter collection the designer went into details that can be found through careful observation.

The audacious creations had humorous twists: slits in unexpected places, bold-lined patterns and origami-inspired slashes on the necklines.

Mainly incorporating camel and black colors, the designer added spark to the collection with the use of red. Flashy enamel-coated textiles imbued with red, camel hues were especially eye-catching. 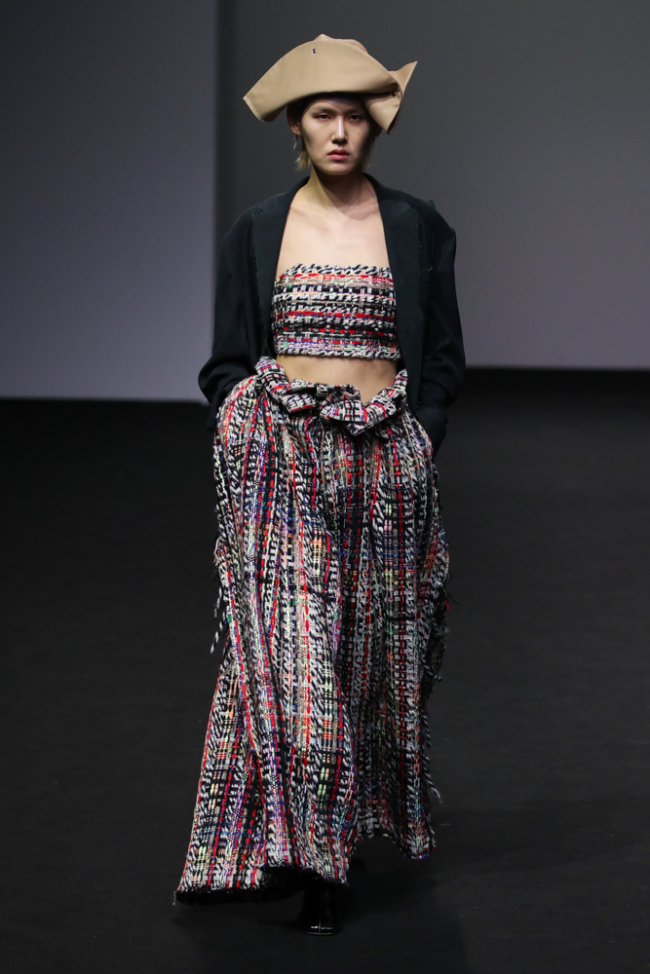 Lee Jae-hyung, who studied fashion in London, says he strives to express the liberation and creation of identity through fashion. Through an experimental use of textile, Lee creates his maximalist style theme.

After three shows at Generation Next, the label’s creations confidently strode down the Seoul Collection catwalk. The fall-winter collection’s theme was “Extraterrestrial,” highlighting a contrast between bold futurism and stylish contemporary looks.

A series of oversized padded jacket, MaxxiJ’s signature item, was on display. Another look, sporting tweed wide-leg pants and a top, was eye-catching. The overall color palette was dark with shades of brown, green and black. But neon yellow highlights added freshness to the collection.