“I believe the possibility is open. There is no way of knowing what kind of a declaration it might be, but I believe the US and North Korea may reach an agreement on the declaration of the war’s end at any degree,” Cheong Wa Dae spokesman Kim Eui-kyeom said at a daily press briefing. 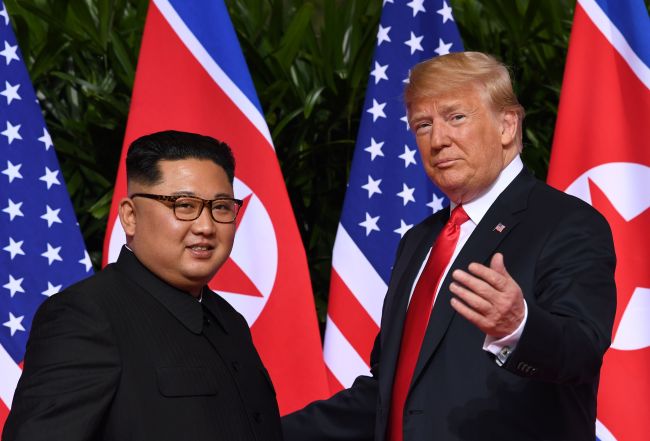 This file photo taken on June 12, 2018 shows US President Donald Trump (right) gesturing as he meets with North Korea's leader Kim Jong-un (left) at the start of their historic US-North Korea summit, at the Capella Hotel on Sentosa island in Singapore. (AFP-Yonhap)

The government welcomes any form of an end-of-war declaration, as long as it plays a role in accelerating the denuclearization of North Korea, even if it is just between Washington and Pyongyang, he said. Seoul had previously said it should be involved in negotiations over such a declaration.

A declaration of a formal end to the decadeslong conflict has been a long-held wish of both North and South Korea. It was one of the agreements reached at the first summit between Kim Jong-un and South Korean President Moon Jae-in. North Korea could benefit from ending the war, as this would reduce its isolation and increase pressure to lift sanctions against the regime.

On the other hand, the US has been reluctant to agree to even a symbolic statement over concerns it could lead to calls for the withdrawal of the 28,500 US troops stationed in South Korea.

Commenting on normalized bilateral relations between countries involved in the Korean War -- South Korea, the US, China and North Korea -- spokesman Kim said the only countries left to declare the end of the war are the North and the US.

“Should the North and the US declare the war’s end, it (the war’s end) would be achieved in the practical sense.”

On Jan. 31, US Special Representative for North Korea Stephen Biegun hinted an end-of-war declaration could be in the cards, saying Trump was “ready to end this war.”

An end-of-war declaration could serve as a bridge between the armistice -- which was inked by the US, North Korea and China to stop the fighting and led to the establishment of the Demilitarized Zone dividing the Korean Peninsula in 1953 -- and a full-fledged peace treaty. However, the declaration would not carry the same legal or political weight as a formal treaty.

Replacing the Korean armistice with a peace treaty would take time, and it must be a multilateral effort involving both Koreas and China, the spokesman said.

“A peace treaty must contain considerably more complicated and structural items. And a peace treaty seems to come in the last stage of the denuclearization process,” he said.