“As the June 12 joint declaration declared, it is our republic’s unchanged stance to build new relations between the two countries, establish lasting and solid peace on the Korean Peninsula and move toward complete denuclearization,” Pyongyang’s propaganda outlet Meari said, referring to an agreement that the two leaders signed in Singapore last year at their first meeting. 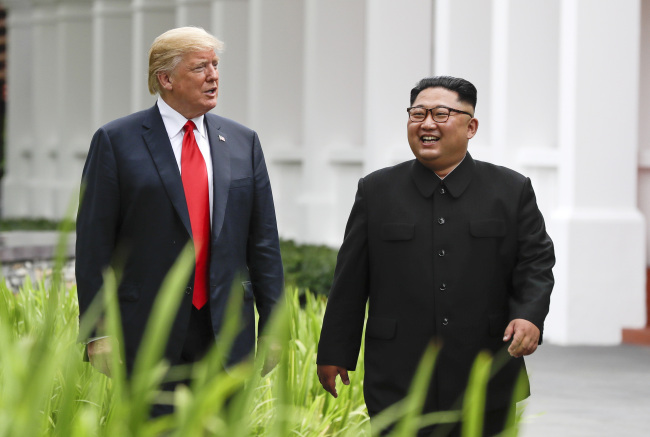 In this June 12, 2018, file photo, US President Donald Trump (left) and North Korea leader Kim Jong Un walk from their lunch at the Capella resort on Sentosa Island in Singapore. (AP-Yonhap)

The US and North Korea will eventually reach “a mutually beneficial final destination,” it said, if they show respect for each other by remembering the moment that the two sides pledged to make a new start in the relationship.

The article from the online state-run publication has appeared just as Kim Jong-un heads to Hanoi, Vietnam, for a meeting with the US president, which is expected to take place Wednesday and Thursday.

“From last year, the Democratic People’s Republic of Korea has taken various practical measures to realize the denuclearization of the Korean Peninsula,” it said.

The steps Meari cited included the suspension of the North’s nuclear and missile tests, the dismantlement of a nuclear test site in the country’s northern area, the return of the remains of US soldiers killed in the Korean War and the announcement by its leader that the country “would neither make and test nuclear weapons any longer nor use and proliferate them.”

North Korea is using the propaganda outlet to call for reciprocity from the US, said Kim Hyun-wook, a professor at the Korean National Diplomatic Academy.

“I don’t think the article indicates that North Korea is willing to make more concessions at the negotiating table. It’s more like ‘I’ve taken those real steps toward denuclearization and now it’s your turn,’” he said.

He added that the two countries still seemed to hold different positions on what rewards they would consider appropriate for steps toward denuclearization on North Korea’s part.

The professor said he expected North Korea to agree to the demolition of the nuclear complex at Yongbyon and intercontinental ballistic missiles that could hit the US and to allow outside inspectors to visit the site. The US, he said, will probably offer to ease sanctions so that the Kumgangsan tours can resume. The tours were suspended in 2008 after a South Korean tourist was shot dead by a North Korean soldier.