[ The Korea Herald – Send E-mail ]
[Weekender] How does saju experience measure up?
By Eileen Cahill
Published : Jan 17, 2019 - 17:41
Updated : Jan 17, 2019 - 17:41
Fortunetelling. Is it frivolous entertainment, or a glimpse of another dimension? And is the saju any different from other fortunetelling methods I’ve tried over the years? I had a chance to find out this past weekend.

Since my dog passed away in 2016, I’ve asked fortunetellers about her with disappointing results.

One long-distance psychic in Canada came highly recommended, but he charged me for an hourlong reading about my dog and emailed me a 10-minute audio recording that had nothing to do with my dog. He claimed an unidentifiable spirit being had made some vague statement about jewelry -- “maybe earrings” -- but he couldn’t even say for sure what kind of jewelry he was talking about, let alone describe it or explain its significance.

But he did describe a kitten I recognized, very playful with orange tabby and white markings. I took care of Oliver in 2010, and he should still be alive and safe in his forever home.

Is Oliver really in the spirit world now? Or does that psychic describe the same kitten to everyone in the hope that most people will “recognize” him?

In spite of it all, I’d still like to believe that a gifted psychic or astrologer or tea leaf reader might overcome my skepticism.

Or maybe a saju reader?

My colleague Lim Jeong-yeo, who is bilingual in Korean and English, guided me to a small saju shop near Apgujeong Rodeo Drive Station in Seoul on Saturday. 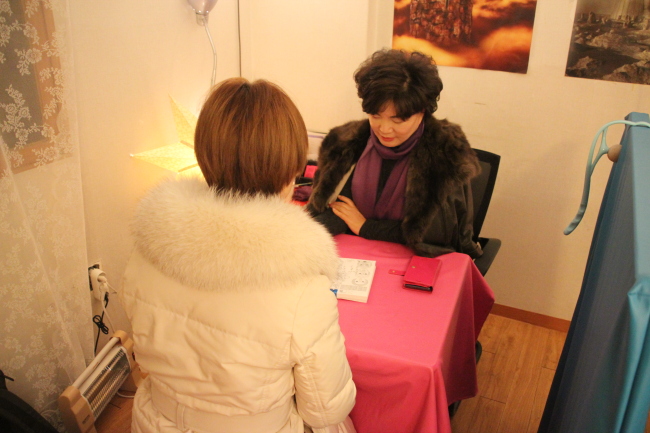 First the fortuneteller asked me to write down my name and my date and time of birth. I had to specify that I was born in the afternoon and was using the solar calendar. Unlike Western astrologers, she didn’t need my place of birth.

She had a piece of paper in front of her, and she wrote down some Chinese characters I didn’t understand. I wasn’t familiar with the saju, but Jeong-yeo explained that it was a form of astrology.

The five elements of the saju are wood, earth, water, fire and metal. A saju reader uses a person’s birth year, date and time to come up with eight characters that somehow match with those five elements, Jeong-yeo said. The characters correspond to predictions about a person’s career, family, money and relationships.

Overall, the reading was fun but vague: My luck is about to change. This year will be better than the last. I should pursue a career that involves a pen, such as writing.

My dog came up about halfway through the session.

“Her death warded off evil things from you,” I learned. “She took away harm that was coming your way. She took the bullet.”

I asked what that meant. What bullet? What evil things?

“2016 was a bad year for you, but your dog took that badness herself,” came the reply. “She protected you.” 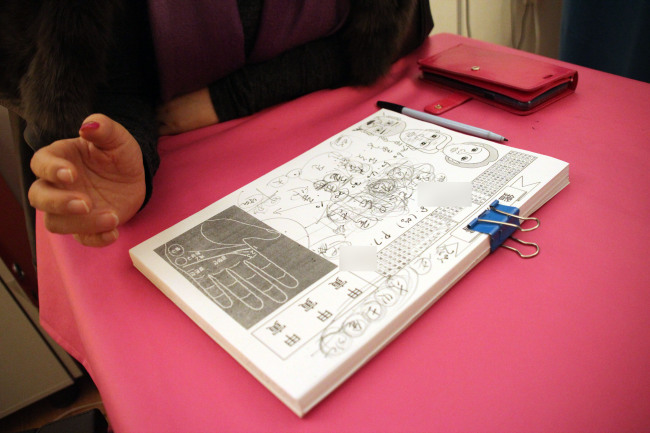 Starting in 2019, the fortuneteller said, only good things will happen.

I asked about my dog. Where was she now? What was she experiencing toward the end of her life?

No answer. My saju showed only that I lost something valuable to me in 2016.

What is it that my dog protected me from?

The fortuneteller in Apgujeong got some things wrong, but she also saw things in my saju that a stranger would have been unlikely to guess. Most of what she said was about the future or “alternative history” -- impossible to verify.

“She says if you had married you would have divorced before 46,” Jeong-yeo said at one point. That’s because I have a “strong personality.”

I also found out that being in a foreign country is good for me. Apart from South Korea, another country that would suit me is Germany.

“If you’d left your country earlier than you had, it would have benefited you even more.”

That’s probably right, but how could I ever put it to the test?

And the saju reader gave me a specific age, several years in the future, when I’m supposed to have “a comfortable and stable life.”

“The good thing about your saju is that you have a strong personality, a strong ego, you -- ‘you are-ness.’ … Your future luck is bigger than the times you’ve, you know, put past you.”

Those were a few of the highlights in a reading that lasted about 25 minutes, including questions and translation time. It cost 30,000 won ($27). On the whole, this saju reader was a lot more helpful than the Canadian psychic I consulted last year, but she didn’t really overcome my skepticism.

Jeong-yeo went to another saju shop a day later to get her own reading done. The method was similar but more intricate, she said.

“She asked what my job was, what part of my job is difficult for me,” she said.

Jeong-yeo had hoped the saju reader would know those things.

“She was a great talker, though, very smooth and convincing and told me things like I’ll be rich, I’ll meet a good man to marry, I’ll do well in my job and so on. It was good to listen to, as she only told me things I wanted to hear, boosted positive thoughts in me.”

I asked if she was happy with her fortune.

“I’m happy with it but only because I work now and can afford 50,000 won,” she said. “As a student I would have been unsatisfied.”