[ The Korea Herald – Send E-mail ]
[Herald Interview] ‘I do not paint to be an artist, but to make clothes’
Designer Song Zio discusses economy of scale in fashion business
By Im Eun-byel
Published : Dec 13, 2018 - 16:45
Updated : Dec 13, 2018 - 16:45
Though some might not instantly recognize the name Song Zio, the brand Songzio Homme will ring a bell right away for many in Korea, especially men who enjoy quality fashion.

Despite the brand’s fame, it has not been easy for local consumers to wear Song’s creations. Founded in 1993, Songzio Homme halted its sales in Korea in the 2000s as it focused on the Paris and London markets.

But in March, the brand returned home.

“I am a person who lives to find new expressions. I try to be conceptual and creative, always looking for new forms and moods to explain myself,” Song told The Korea Herald in a recent interview at his office in Seoul. 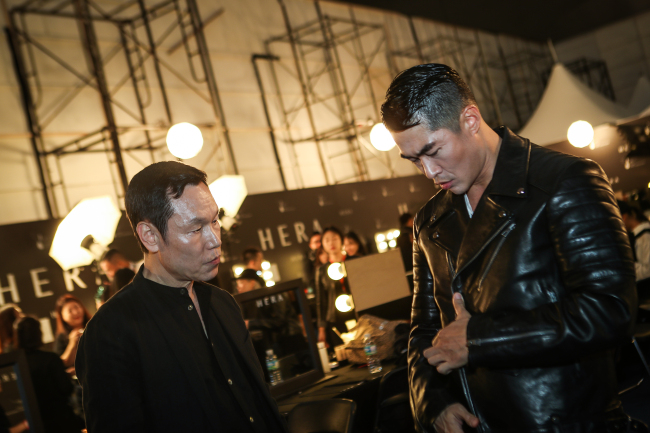 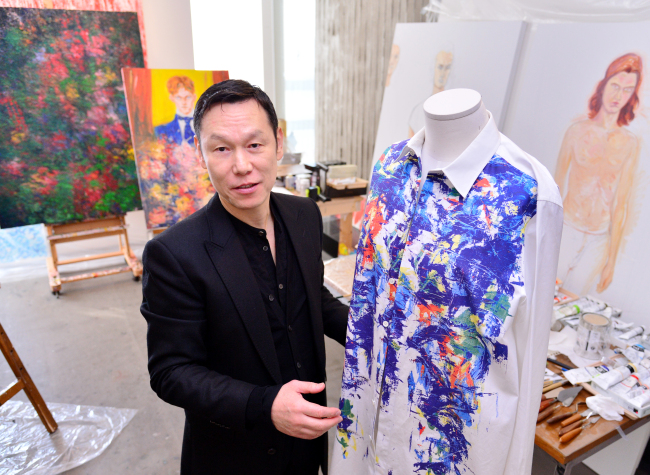 Fashion was more about the textiles industry, viewed from an industrial perspective, rather than as a form of art. Song went abroad to study fashion, attending the prestigious ESMOD fashion school in Paris.

“Paris was such a strange city for me. It was classical, compared to cities in the US,” he said. “The city played a large part in shaping my fashion philosophy.”

For instance, Song paints before he makes creations. He paints on a canvas and the art pieces become the inspiration for the collection. Some creations are inspired by the paintings’ use of color. Pieces like T-shirts are printed with an image of the paintings.

“I do not paint to be an artist, but to make clothes,” he said. “I reckon if I hadn’t studied in Paris -- a city that truly appreciates art and classics -- I might have not come up with this kind of an idea.”

“For the upcoming season, the main theme is ‘Black Cat,’” Song said, showing the painting. On an easel stands a painting of a lonely, yet strong, black puma.

The cat seemed to be a representation of the designer himself. Though not outstandingly big in size, its presence is undeniably felt -- just as the designer. Song speaks softly, but his tone is neither feeble nor weak.

Then, there is the color black. If there was one word representing Song, it would be black. On the day of the interview, the designer was dressed in black from head to toe. Most employees at the office were dressed in dark hues of black, charcoal, gray and navy.

The dark presence was not limited to just the staff, but also to the space. Black is the main color of his penthouse office in Seongsu-dong, eastern Seoul.

“Black is the color of the universe. It is more of a space, rather than just a color that can encompass all colors,” Song said.

According to the designer, a collection -- especially a menswear collection -- can become stable when black is used as the main base color, which then highlights other colors.

“Black has a strong power that takes people over. It changes greatly when it meets with other colors,” he said. “And simply, we look good in black with our dark-toned hair and eyes.” 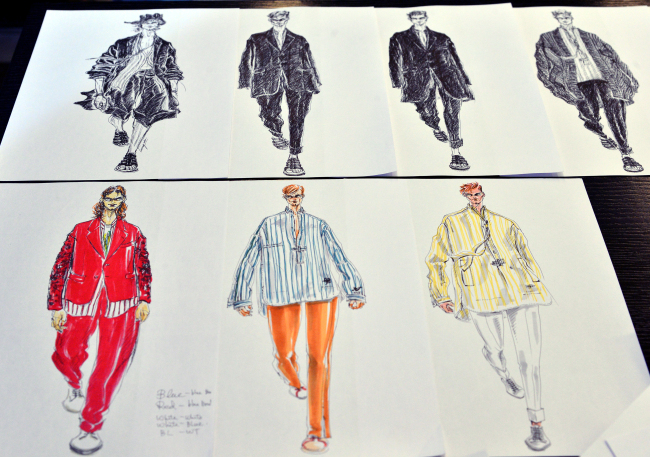 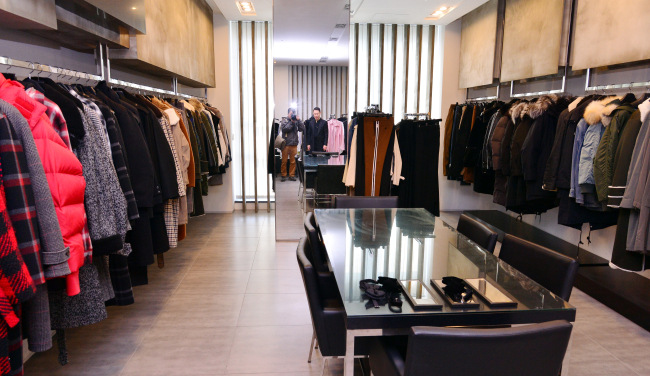 Songzio Homme creations are displayed at Song Zio’s office in Seongsu-dong, Seoul. (Park Hyun-koo / The Korea Herald)
Though Song is artistic, he is also very realistic. He is fully aware of the importance of numbers.

Since 2003, Song has been running a second label, Zio Songzio, in collaboration with CJ O Shopping, the country’s largest home shopping company.

While Songzio Homme is more about the runway and concept of fashion as a form of art, Zio Songzio stresses accessibility. The label is more commercial, with simpler and more comfortable designs.

“We have to be big in size to do what we really want to do. It is the economy of scale. To invest in creativity, the size is important,” Song said. “Commercial art is defined by the size of the company.”

Enduring the 1997 Asian financial crisis and other crises since, the veteran designer experienced head-on the limitations of small companies. From his point of view, a fashion house should record more than 100 billion won ($89 million) in sales to manage creative projects without significant constraints.

“For a label to grow to such a size, it has to be overly commercialized. That is why a fashion house needs to be multilabeled, with perhaps three to four labels, so the size can be achieved.” Song said. 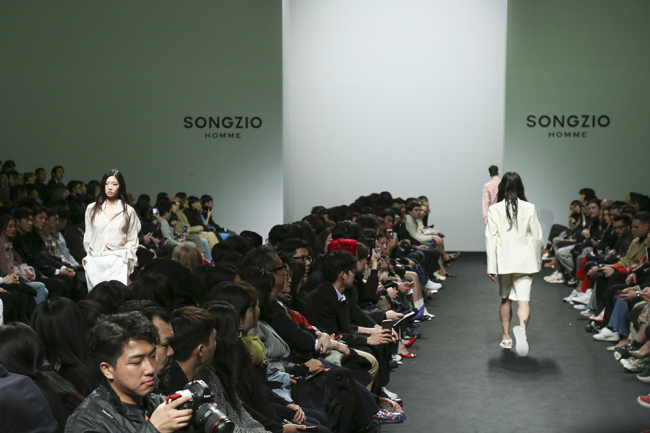 Songzio Homme’s runway at the 2019 Spring-Summer Hera Seoul Fashion Week (Seoul Design Foundation)
As a seasoned designer, Song also is all about supporting young designers. He was the president of Council of Fashion Designers of Korea, one of the largest associations for fashion designers here, until June.

Though he tried to do his best to help young designers during his two-year term, he has his regrets.

“I wanted to show vision to young designers with big dreams, but the two years were shorter than I expected. The industry is in such difficult times now. I know how hard it must be for them. I have been through all this difficulty,” he said.

In the long run, Song hopes he can help young designers by successfully running his fashion house. He wants be to an example for others.

“I can be an inspiration, showing others that this is the way to grow a fashion house,” he said. “This is my goal now -- to be a valuable brand. Before, I had just thought about growth, but now it is more about the value.”