The measures, which the government and the ruling party claim would bring significant benefits to merchants, has been met with strong resistance from the credit card industry, with its labor unions threatening industrial action. 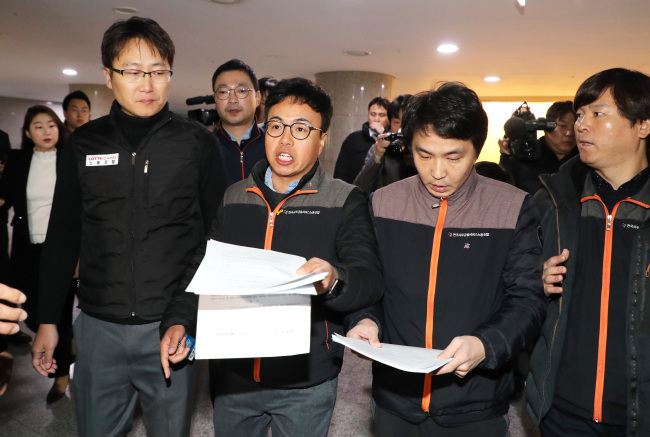 Members of the association of credit card firms` unions are turned away from the ruling Democractic Party and financial authorities` meeting on credit card transaction handling fees at the National Assembly on Monday. Yonahp
Credit card companies voiced concerns over the impact the measures will have on profitability, with some claiming that a significant cut in their spending will be required to deal with the fallout.

The association of related labor unions, whose representatives had attempted to enter Monday’s meeting between party and government officials, warned of industrial action.

“(The measures) are anti-democratic tyranny that ignores the democratic and social agreement between concerned parties,” the association said, calling on the government to retract the measures.

On Friday, the association and representatives of small and medium-sized business owners had agreed to submit plans suggesting fees for large businesses to be raised, and that for small merchants reduced.

The association also claimed that as the plans do not include raising the rates for large businesses and setting a lower limit, the changes will hurt everyone concerned. It called on the government to apply the agreement it reached with small business owners.

“We are ready to stage all-out strikes in our fight against the government.”

While the ruling party recognized the potential for a drop in credit card companies’ revenues in its press release, the party downplayed the issue as being short-term. The party also claimed that developments brought on by the rate changes will provide “an opportunity to improve the credit card industry’s stability.”

According to the government and ruling party’s estimates, the credit card industry is able to deal with a drop of 800 billion won ($708.8 million) in annual revenue from fees by cutting marketing costs and those arising from other activities.

Under the agreement reached by the government and the ruling party, the credit card transaction handling fee rate for small merchants with annual revenue between 500 million won and 1 billion won will be cut to 1.4 percent. The current rate is 2.05 percent for businesses in the bracket.

The rate for businesses with annual revenue ranging between 1 billion won and 3 billion won will be cut from 2.21 percent to 1.6 percent. The measures agreed to on Monday will also see the rate applied to businesses with less than 50 billion won in annual sales cut to about 2 percent, from the current 2.2 percent.