The move is part of the government's efforts to support self-employed business owners at a time when the nation's economy shows signs of sluggish growth in the face of weakening private consumption.

Credit card processing fees for small merchants with an annual revenue of between 500 million won and 1 billion won will be lowered to 1.4 percent per transaction from 2.05 percent, according to officials at the Financial Services Commission. 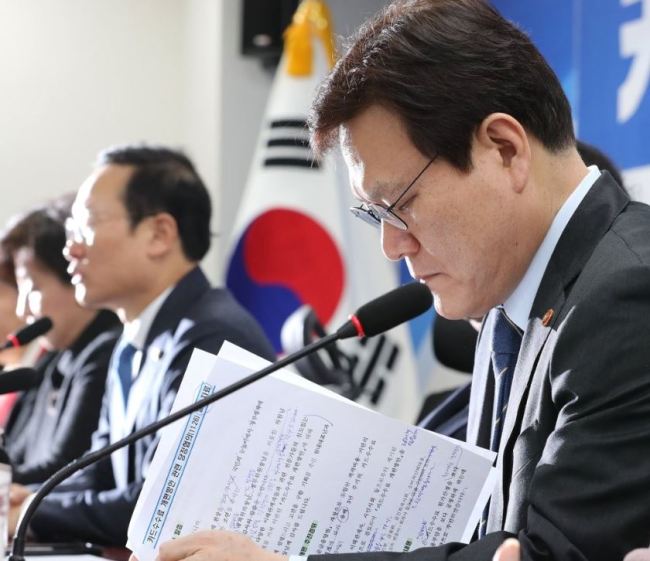 Choi Jong-ku, head of the Financial Service Commission, looks over prepared materials before a government-ruling party meeting on Nov. 26, 2018, at the National Assembly in Seoul to discuss lowering credit card commissions for small merchants. (Yonhap)
For merchants with an average revenue of between 1 billion won and 3 billion won, credit card processing fees will be cut to 1.6 percent per transaction from 2.21 percent, FSC officials said.

The proposed cut in credit card processing fees is expected to benefit about 2.5 million merchants with an annual revenue of 3 billion won or less, according to the FSC.

In a meeting with chief executives of credit card firms Friday, Choi urged them to actively cooperate with the cut.

In the first half of the year, major credit card firms saw their combined earnings spike nearly 51 percent thanks to increased card usage and greater income from credit card loans.

The combined net profit of eight card issuers, including Shinhan Card Co., Samsung Card Co. and KB Kookmin Card Co., came to 810.1 billion won in the January-June period, up 50.9 percent from a year earlier, according to government data.

The sharp rise was attributed to a combination of increased income from fees, earnings from card loans and decreased loan-loss reserves. (Yonhap)