[ The Korea Herald – Send E-mail ]
Human rights report says Korea has ‘serious racism problem’
By Claire Lee
Published : Nov 8, 2018 - 16:10
Updated : Apr 9, 2019 - 17:31
South Korea has a “serious racism problem” that needs to be addressed by the government, a newly released report by the National Human Rights Commission of Korea says. The report is a periodic review of the country’s human rights status required of all signatories to the UN International Convention on the Elimination of all Forms of Racial Discrimination.

The report stressed the importance of enacting comprehensive anti-discrimination laws, which would make racist acts illegal and therefore punishable.

It also suggested the government provide a “legal and institutional framework” to prevent racism in the country, and include a definition of racial discrimination in its laws in accordance with the UN convention. 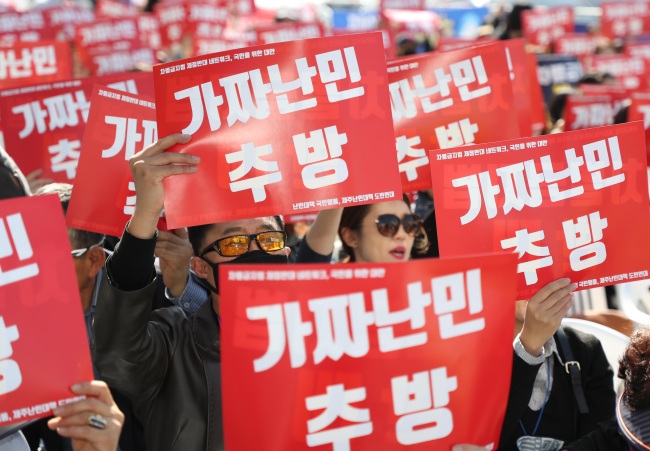 Korean participants attend a anti-refugee rally and hold a sign that says "Fake refugees out" in central Seoul. (Yonhap)
“There is (currently) no law that covers the definition of racial discrimination in Korea,” the rights commission said in the report. “A survey on human rights status of immigrants indicates that (the government’s previous) efforts had insignificant impact on the protection and promotion of the human rights of immigrants.”

One of the most troubling concerns, the report said, is the rise of racism in the media as well as in online communities -- both factors that influence Koreans’ social behavior. Racist remarks were frequently heard during anti-refugee rallies that targeted some 500 Yemeni asylum seekers who arrived on the southern island of Jeju this year, the report added.

“Negative perception on refugees and aliens including unfounded, distorted or exaggerated claims arising from the burden of accepting refugees and prejudices against Islamic religions are spreading (in Korea),” said the report.

For example, a Korean lawmaker last year said during a public discussion on immigration policies, “If freedom is granted to a (foreign) person who does not perform the four national duties (in Korea), it could bring serious terrorist threats to our daily lives.”

According to the rights commission, the lawmaker’s remarks constitute “racially motivated criminal offenses” in accordance with the UN International Convention on the Elimination of all Forms of Racial Discrimination. But because Korea currently lacks adequate anti-racist legislation, it is difficult to prosecute racially motivated crimes in the country, the organization added.

The report contained a number of disturbing accounts of crimes against non-Koreans. Last year, an undocumented worker from Thailand was murdered by a Korean colleague. According to the report, the victim was lured to the perpetrator’s vehicle, after being told that the killer was going to take her to a “safe place.” In the car, he killed her after attempting to rape her.

Also last year, two Malaysian workers -- who had entered Korea legally without visas under a waiver agreement between the two countries -- had their passports taken away by a broker when they started working illegally at a construction site in Korea. The broker took more than half of their daily wages, so they only received 40,000 won ($35) per day.

According to a 2016 rights commission survey on racially motivated remarks, 56 percent of the immigrants surveyed said they had experienced depression and emotional distress after encountering hateful remarks while living in Korea.

Other human rights violations included denial of access to restaurants and denial of treatment in medical institutions.

The rights commission is also currently investigating a recent incident in which a worker from Myanmar died during a crackdown by Korea’s Ministry of Justice, the report said.