[ The Korea Herald – Send E-mail ]
[Herald Interview] ‘Future of Malaysia, Korea lies in ASEAN’: international trade minister
“Now there is a chance to reshape and rewrite our future under our current government. The answer is ASEAN. Korea and Malaysia are inseparable, just as ASEAN, Malaysia and Korea are inseparable.”
By Joel Lee
Published : Oct 22, 2018 - 17:14
Updated : Oct 22, 2018 - 17:17
Despite having advanced infrastructure and connectivity in the heart of Southeast Asia, until now Malaysia was not able to fully exploit its capacities as an outward-looking trading economy.

With the launch of a new government under Prime Minister Mahathir Mohamad in May, Kuala Lumpur has set its sights clearly on moving up the value chain and engaging the world with a focus on ASEAN and its Asian-Oceanian partners, according to Malaysian Minister of International Trade and Industry Darell Leiking.

“Malaysians are rebuilding our nation,” Leiking told The Korea Herald following a business forum on Malaysia at the Lotte Hotel in Seoul on Friday. “There were many things done the wrong way before we took over the government this year. We are a hardworking nation with excellent infrastructure. Our 93-year-old prime minister is leading us -- healthy, clearheaded and strong -- which is what Malaysia needs, and what ASEAN needs.” 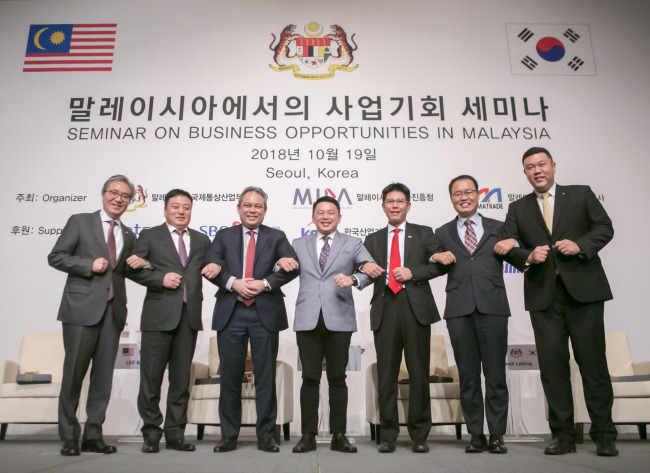 Malaysian Minister of International Trade and Industry Darell Leiking (center) poses with MIDA CEO Dato Azman Mahmud (third from left), MATRADE CEO Mohd Shahreen Zainooreen Madros (third from right) and Korean officials, a scholar and a corporate executive, at a business seminar on Malaysia in Seoul on Friday. (Malaysian Investment Development Authority)
The politician from the eastern Malaysian state of Sabah came to Korea last week with a retinue of state assembly representatives from Malacca, Johor, Penang and Terengganu, and officials from his ministry, the Malaysian Investment Development Authority and the Malaysia External Trade Development Corporation, among other government bodies. His trade-investment mission also included some 90 representatives of Malaysian companies, who conducted business meetings with potential Korean investors and partners.

Malaysia is the third-largest economy in the Association of Southeast Asian Nations with a $1 trillion gross domestic product and $11,000 GDP per capita, or $31,000 in purchasing power parity. As outlined in the 11th Malaysia Plan (2016-20), the country is also aggressively moving forward in adopting Industry 4.0 technologies, such as smart manufacturing and automation.

“This time around, we believe that Malaysia has an opportunity to reshape its future. A change of government brought with it new ideas and strategies,” he said. “Through MITI, MIDA and MATRADE, we have kept intact what was already implemented as the fundamental pillars of development and investment. We are also preparing ourselves to weather any economic storms coming from abroad.”

“Our government believes that the answer to any economic challenges is by cooperating with our neighboring countries,” he said, calling this a “policy of prosper-thy-neighbor.”

“Prospering our neighbors means we also prosper together. When all ASEAN member states become prosperous, we become a successful and competitive economic bloc. Countries like Korea, Japan and China, which are part of the ASEAN Plus Three group, as well as the 16-member RCEP that includes India, Australia and New Zealand, can also benefit from this cooperation.”

The Regional Comprehensive Economic Partnership, or RCEP, is a proposed free trade agreement between the 10 ASEAN member states and the six states with which ASEAN has existing free trade agreements: Australia, China, India, Japan, South Korea and New Zealand. With a combined population of 3.4 billion people and combined gross domestic product of $23.5 trillion, the 16 countries account for almost half of the world’s population and over 30 percent of global GDP. They also make up over a quarter of world exports, according to ASEAN data.

Malaysia is also an original signatory to the Comprehensive and Progressive Agreement for the Trans-Pacific Partnership, formed after Washington deserted the original pact after President Donald Trump assumed office.

By spurring commerce between the 16 RCEP countries, “we can counter any threat in the volatile global economy,” he stressed, adding that the multilateral deal will be a major boost to the free trade of goods and services as well as investment. “Now there is a chance to reshape and rewrite our future under our current government. The answer is ASEAN. Korea and Malaysia are inseparable, just as ASEAN, Malaysia and Korea are inseparable.” 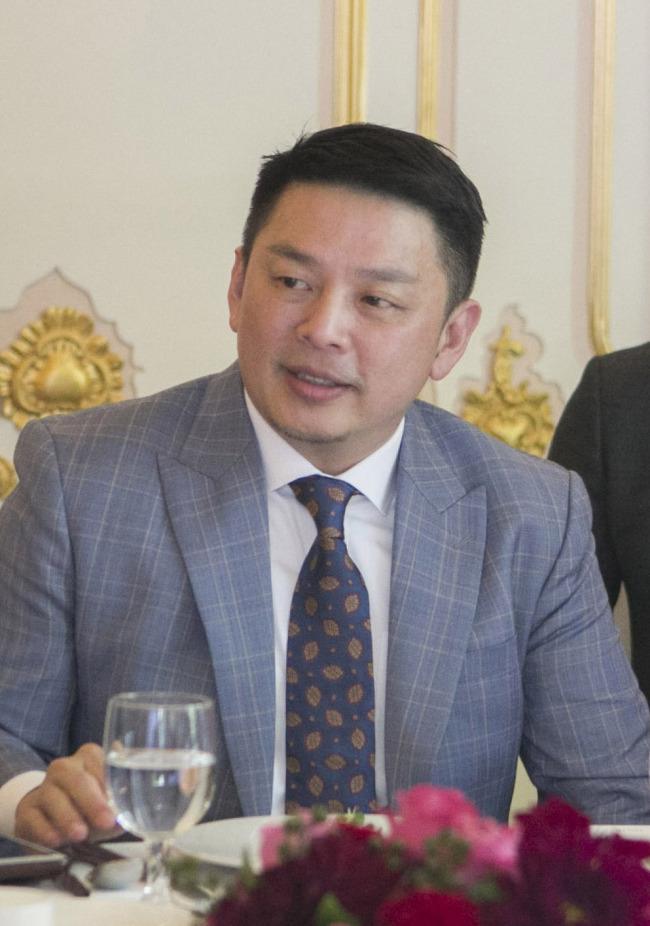 Malaysian Minister of International Trade and Industry Darell Leiking (MIDA)
Since becoming the international trade minister, Leiking has argued that the ongoing trade war between America and China presents opportunities for other nations.

“The trade war will create spillovers and repercussions, which we can utilize,” he argued. “Such an economic storm can be weathered if we understand that ASEAN could become a powerful, united and integrated economic bloc together with the rest of the RCEP countries in a new world order.”

Noting that Malaysia has an ambition to be a sophisticated and advanced economy like Korea and Japan, Leiking said there are many opportunities between Malaysia and Korea to increase collaboration in advanced technology-, knowledge- and capital-intensive industries, among other sectors.

“I see many opportunities between Malaysia and Korea, particularly in cosmetics, food, medicine, clothing, etc. They can all go halal through Malaysia. These halal products and services can be sold within ASEAN as well as the larger Muslim world,” he said.

Malaysia’s Ministry of International Trade and Industry has under its auspices the Halal Industry Development Cooperation, an agency that ensures the integrated and comprehensive development of the national halal industry and its exports. The global halal sector is estimated to be worth $3.7 trillion by 2019, according to research by Thomson Reuters, and the number of Muslims worldwide is expected to reach 2.8 billion by 2050, according to the Pew Research Center.

Between 2016 and 2017, trade between Malaysia and Korea expanded nearly 14 percent from $14.4 billion to $16 billion, with Malaysia exporting nearly $7 billion worth of electrical and electronic products, liquefied natural gas, metal products, chemicals and chemical products and palm oil-based products. During the same period, Malaysia imported $9 billion worth of Korean goods, ranging from smartphones and smart manufacturing equipment to cosmetics and cars.

There are more than 260 Korean companies operating in Malaysia, including corporate giants Lotte, Samsung, Hanwha and Posco. Total Korean investments there top $7.8 billion.

Following the first wave of the Look East Policy -- launched in 1982 to emulate the nation-building experiences of Japan and Korea -- Kuala Lumpur and Seoul in 2014 agreed to implement the second wave, aimed at deepening and diversifying bilateral relations for mutual economic development. The second phase is geared toward strengthening trade and investment ties, small and midsized enterprises, technology sharing and human capital development -- all ways of encouraging active participation by the private sector.