President Moon Jae-in on Wednesday honored thousands of UN forces who fought in the famous Battle of Chosin, also known as the Battle of Changjin, during the Korean War, calling them true heroes who sacrificed their lives for those they did not even know.

"Today, we have gathered to honor the heroes of the Changjin battle. The heroes of Changjin Reservoir sacrificed themselves 68 years ago for people they have never met. Those who survived through such noble sacrifice never forgot the value of freedom and peace left by the heroes, not even for a moment," the president said in a commemorative speech read by Minister of Patriots and Veterans Affairs Pi Woo-jin on his behalf.

The speech was delivered in a ceremony held at the War Memorial of Korea in Seoul. 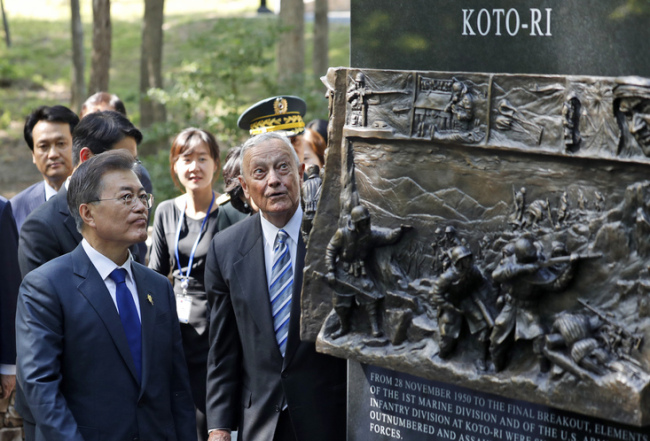 In a file photo taken on June 28, 2017, resident Moon Jae-in looks at the "Chosin Few Battle Monument," with former Marine Corps Lt. Gen. Stephen Olmstead, at the National Museum of the Marine Corps in Triangle, Virginia. (AP-Yonhap)
The Battle of Chosin was one of the fiercest battles in the Korean War and took place around Chosin, or Changjin, Reservoir in what is now North Korea's northeastern South Hamhung Province.

The 1950 battle enabled the famous Hungnam evacuation, in which 100,000 UN troops helped evacuate an equally large number of Korean civilians, including Moon's own parents, to South Korea.

More than 3,000 UN troops, mostly American soldiers, are said to have been killed in the battle.

On his maiden trip to Washington as a South Korean president in June last year, Moon made a surprise visit to the Korean War Veterans Memorial to pay his respect to those who died in the Battle of Chosin.

"Today, I once again pay my respects to those heroes and report that lasting peace is now approaching the Korean Peninsula," Moon said Wednesday.

The president said the sacrifice made by the heroes of the Chosin battle led to the strong alliance between his country and the United States.

"The Republic of Korea will never forget the Battle of Changjin or the sacrifice of those who fought in the war," Moon said, referring to his country by its official name.

"The journey of the South Korea-US alliance toward peace will continue," he added. (Yonhap)