Buheung System and DK&D received awards following a rigorous selection process by a panel of judges comprising Indonesians in Korea and embassy staff, according to the diplomatic mission.

The companies provided Indonesians the same wage as Koreans, accommodations and other facilities and holidays as specified by law. They also protected the workers’ conditions with due diligence and care. There has been no industrial accident or death at the firms, the embassy said. 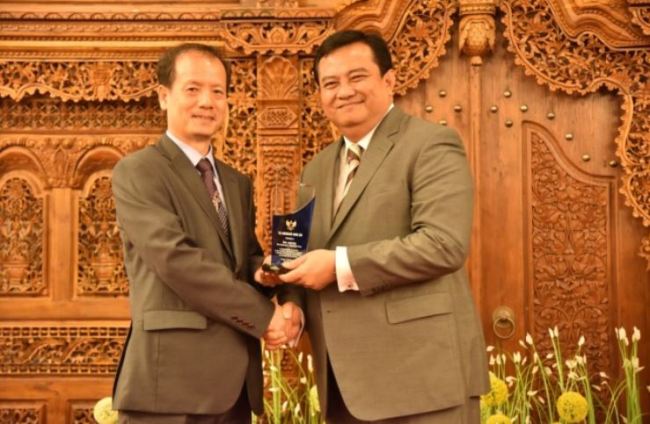 Indonesian Ambassador to Korea Umar Hadi (right) presents a plaque of appreciation to a Korean company representative at the embassy on Aug. 26. (Indonesian Embassy)
“This ceremony aims to protect the interests and well-being of 32,000 Indonesians working in Korea, move forward our bilateral relations and express gratitude to Korean employers,” the envoy said in a speech. “I convey our appreciation to all Indonesian diaspora here, and willingness to strengthen our bond and cooperation away from home.”

DK&D, which employs 14 Indonesians, has plans to establish an overseas branch in Indonesia.

Aside from the appreciation plaques, the ambassador also bestowed various awards to those selected for their hard work, promotion of Indonesian culture and protection of countrypeople here. 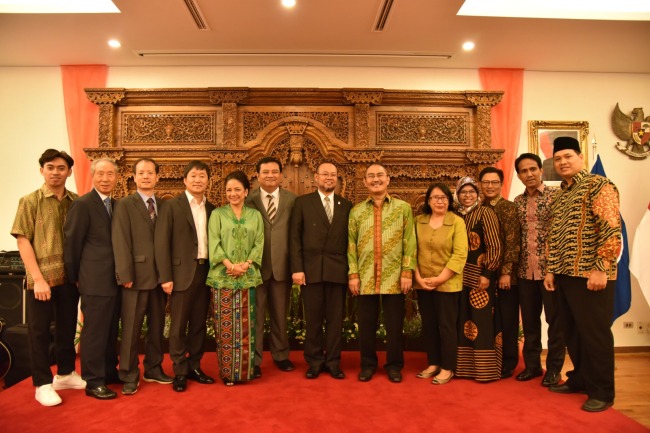 Award recipients and diplomats pose at the embassy on Aug. 26. (Indonesian Embassy)
Saiful Ansori was honored for his dedication to work at his company Byulpyosusemi, which he pursued alongside university studies.

“Starting my work in Korea has been the best starting point in my life,” he said upon receiving the accolade. “I plan to open a Korean restaurant in Indonesia after returning home, making the best of my experiences here.”

The cultural promotion award was given to Soekaryadi, who introduced Indonesia’s traditional performance Jarana at various embassy and cultural events and strengthened people-to-people ties.

Rima K. Moedjiono was honored for protecting and assisting her countrypeople in times of difficulty.