[ The Korea Herald – Send E-mail ]
Moon yet to follow up on pro-business gesture
By Kim Kyung-ho
Published : Jul 18, 2018 - 16:52
Updated : Jul 18, 2018 - 17:08
President Moon Jae-in’s recent outreach to the business community seems to have so far fallen short of gaining full confidence and cooperation from corporate officials.

The local corporate circle is cautiously watching whether he will follow through with his encouraging signals to shift to business-friendly policies despite objections from civic and labor groups as well as many ruling party lawmakers.

In a move that was seen as heralding changes in his stance to keep a distance from the country’s large conglomerates, he met with Samsung Electronics Vice Chairman Lee Jae-yong when he attended a ceremony to open the company’s smartphone factory during his visit to India last week. He asked Lee, the de facto head of Korea’s largest business conglomerate, to make more investments and create more jobs at home. 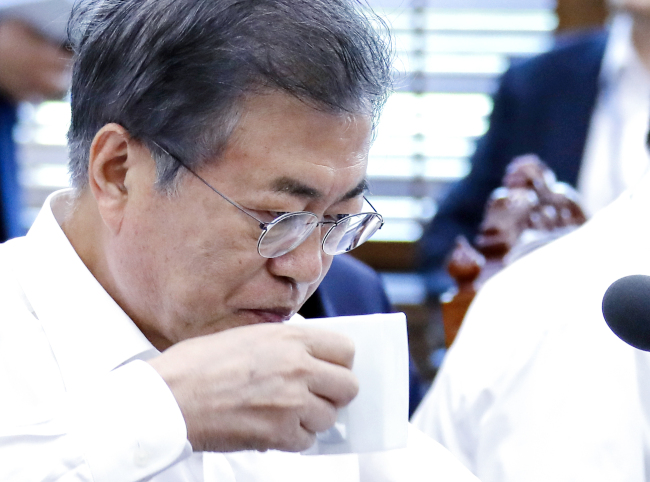 (Yonhap)
In a speech to a gathering of Korean and Indian business leaders, Moon pledged to make Korea a better place to do business.

Last month, he expressed discontent with the slow pace of deregulation by canceling a meeting that was to review the government’s work to lift regulatory restrictions.

Such moves seem to reflect deepening concerns over the lackluster economic performance shown by the Moon administration since it was launched in May last year.

The on-year increase in the number of newly employed people hovered around 100,000 for the fifth consecutive month in June, far below what is considered a desirable level of 300,000. It marked the worst record since the country went through the fallout from the 2008 global financial crisis.

Particularly worrisome was that the number of workers in the manufacturing sector contracted for the third straight month in June.

Consumption spending and facility investment dropped 1 percent and 3.2 percent on-month in May, respectively.

Except for semiconductors, Chinese rivals have caught up with most of the country’s key manufacturing industries.

“(The Korean economy) has faced a structural crisis where no future growth engines are seen and the ability to create jobs continues to weaken,” said Lee Phil-sang, an economics professor at Seoul National University.

Announcing the direction of its economic policies for the latter half of this year, the government revised down its growth forecast for 2018 to 2.9 percent from its earlier projection of 3 percent. It also lowered its job creation target for this year to 180,000 from the originally planned 320,000.

In a recent interview with a local daily, Fair Trade Commission head Kim Sang-jo, who has spearheaded conglomerate reform, made unexpected remarks that he felt distressed by the poor economic performance of the Moon administration.

He noted the Moon government had only a year or so to reap substantial results on the economic front, which he said would be key to the success of Moon’s five-year presidency.

He said the president would be determined to push for drastic deregulation over objections from his political base.

But many economists and corporate officials remain skeptical about whether Moon will firmly get in tune with the global competition to forge more business-friendly conditions through regulatory and labor reforms to boost growth and employment.

“It seems too early to have confidence in the policy shift,” said a corporate executive, asking not to be named. He said Moon’s recent meeting with Samsung Electronics Vice Chairman Lee might have been designed to gauge public sentiment, adding the president’s pro-business gestures still appear to lack sincerity.

The local business community has been confused by contradictory signals from the government and ruling party.

Days after Moon met with Lee, Rep. Hong Young-pyo, the floor leader of the ruling Democratic Party of Korea, said at a forum that Samsung had been able to achieve its accomplishment by exploiting subcontractors. He said it would be possible to dole out 10 million won ($8,865) each to 2 million people by setting aside a third of the tech giant’s operating profits last year.

“It is hard to expect the government to take substantial measures to help boost corporate activity as long as the perception persists that companies are the subject of reform, not key players in the economy,” said an economist at a private research institute, requesting anonymity.

“A strategic cooperation between the government and the corporate circle is more important than ever,” he said.

But there has been no sign of letup in probes by the prosecution, tax authorities and financial watchdog targeting large businesses, with deregulation blocked by Moon’s political supporters who claim it departs from progressive ideologies.

Small and medium-sized businesses are also troubled by the Moon administration’s labor-friendly measures such as steep minimum wage increases and reduced working hours.

Economists say Moon needs to be more active in settling policy discords within his administration and the ruling party and overcoming objections to regulatory reforms.

“There is no other reason than misguided policies for the weakening of our economy, given other major economies, including the US and Japan, go smoothly,” said Cho Jang-ok, an economics professor at Sogang University.