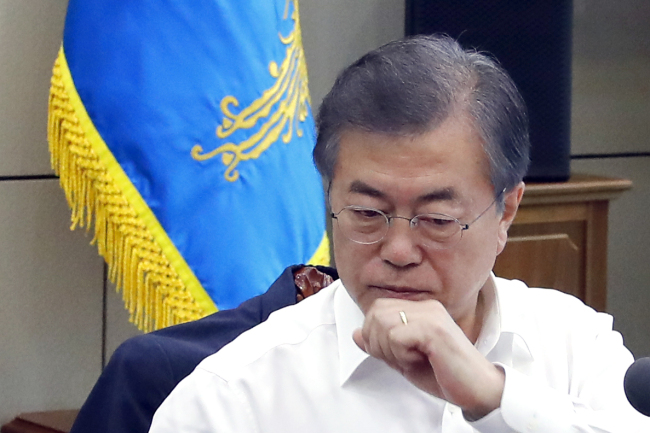 President Moon Jae-in at Monday`s meeting with top presidential aides. Yonhap
The planned raise has been met with criticism from all sides -- small and large employers, labor groups, as well as conservatives and liberals.

Criticism of his minimum wage policy is beginning to show in the ratings.

In the most recent Gallup Korea poll, Moon’s approval rating dropped to the lowest in five months, coming in at 69 percent.

In the poll, economic difficulties and the minimum wage hike were the top and third most cited reasons, respectively, among those who negatively assessed Moon.

For Moon, whose economic policy centers on higher wages and who pledged to raise the minimum wage to 10,000 won per hour by 2020, there is no easy way out.

A national association of small merchants say that more than half of businesses with less than five workers are unable to pay next year’s minimum wage.

Even some of Moon’s top economic policymakers have voiced concerns about raising the minimum wage rapidly.

“There is concern that the double-digit increase of the minimum wage could burden the economy in the second half,” Finance Minister Kim Dong-yeon said at Monday’s meeting with Bank of Korea Gov. Lee Ju-yeol.

Experts say that while the drop in ratings is a complex issue tied to multiple factors, including US-North Korea relations, the Moon administration’s approach to resolving employment and minimum wage problems may be the root cause.

“For the public, (the administration’s approach) to solving related problems would be hard to accept. Tax burden is increasing but little is being returned (to the majority of the public),” said Shin Yul, a political science professor at Myongji University, citing plans to increase subsidies for low income groups.

According to Shin, about 30 percent of voters can be considered solid Moon supporters and the latest figures indicate that this supporter base may be dissolving.

“If he believes that (the minimum wage increase) is 90 percent positive, then he should push ahead, or if not, apologize and admit that there are problems,” Shin said.

Shin was referring to Moon’s comments that 90 percent of the effects of the minimum wage increase are positive, at the May 31 national finance strategy meeting.