[ The Korea Herald – Send E-mail ]
[Herald Interview] ‘Career at ICRC immensely rewarding, gratifying’
By Joel Lee
Published : Apr 2, 2018 - 15:09
Updated : Apr 2, 2018 - 19:32
Boris Michel, a Swiss citizen working as regional director for the Asia-Pacific region at the International Committee of the Red Cross, believes he grew up in a “privileged environment where the culture of neutrality, consensus and altruism” piqued his interest in humanitarian work.

“A lawyer by training, I have learned quickly that a society without rules and principles can lead to abuse and suffering,” he told The Korea Herald last week, adding he has worked in conflict zones in Africa, Central Asia, the Balkans and the Middle East for the past 25 years.

“As a humanitarian worker, serving extremely vulnerable people in close proximity and being in contact with political leaders is extremely rewarding. It gives me a sense of direction to my life.”

Michel urges more Koreans to develop interest in global humanitarian issues and potentially look for a career at the ICRC. 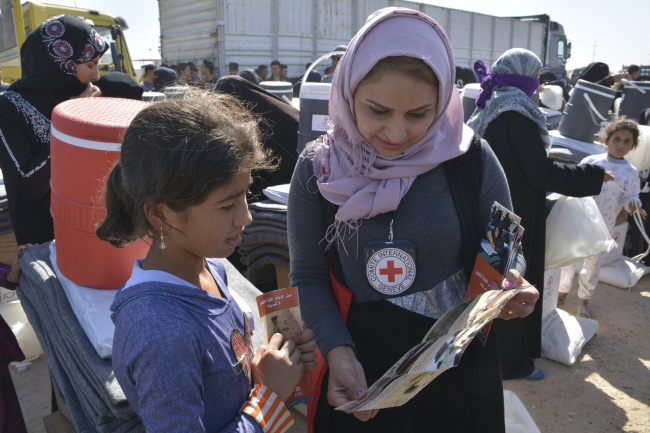 An ICRC worker distributes relief items to an internally displaced person at the Amiryat Al-Someed camp in Anbar province, Iraq. (ICRC)
Korea and the ICRC -- the world’s oldest humanitarian organization established in 1863 in Geneva, and producing four Nobel Peace Prize winners -- signed a Headquarters Agreement in Geneva on Feb. 26 to give the institution legal recognition in Korea. South Korean Foreign Minister Kang Kyung-wha and ICRC President Peter Maurer were present at the signing ceremony.

The new status would greatly facilitate the ICRC’s work in Korea, such as in renting office space, hiring personnel, implementing humanitarian assistance and engaging in partnerships with various groups, he said.

“As a country open to the world and with immensely capable and diverse human resources, Korea could produce many more professionals working at ICRC and other humanitarian organizations worldwide,” he said. The ICRC participates in various job fairs across the Asia-Pacific region, including here. Those interested in working at the ICRC can visit kr.icrc.org or www.facebook.com/ICRCkr.

The institution has operations in over 80 countries around the globe, including in North Korea.

The most critical countries in need of humanitarian assistance, according to Michel, are Syria, Iraq and Yemen in the Middle East; Somalia, South Sudan and the Democratic Republic of Congo in Africa; and Afghanistan, Myanmar, Bangladesh and the Philippines in Asia. 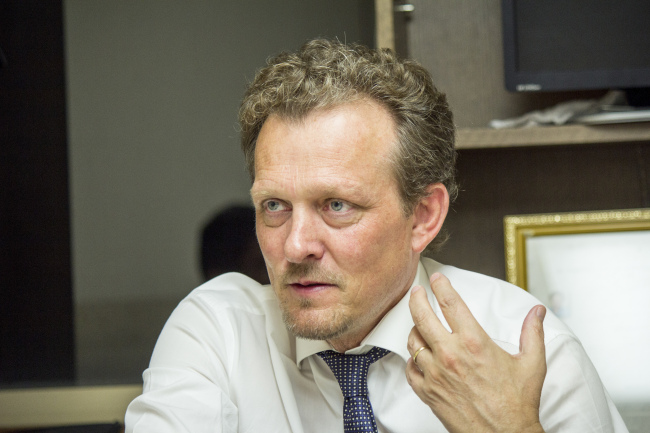 Boris Michel, regional director for the Asia-Pacific region at the International Committee of the Red Cross (ICRC)
Around the world there are 65.6 million forcibly displaced people, 22.5 million refugees and 10 million stateless people, the United Nations High Commissioner for Refugees tallies. Nearly 20 people are forcibly displaced every minute as a result of conflict or persecution.

“It is crucial that the rule of law in conflict zones is enforced by various state and nonstate actors to better enhance the protection of civilians and preserve human dignity,” he said. “We not only tirelessly protect and assist people, but also engage in multilateral fora to shape humanitarian policies and improve compliance to international humanitarian laws.”

Since 2002, the ICRC has offered physical rehabilitation and related orthopedic medical services in partnership with the Democratic People’s Republic of Korea Red Cross Society and relevant state departments. It operates in hospitals in Hamhung, Pyongsong, Sariwon and Kaesong with a base in Pyongyang.

The ICRC has also supported affairs related to the separated families between the two Koreas, offering technical expertise on handling data and logistical support.

“Regarding humanitarian aid to North Korea, we firmly believe that the issue should be kept separate from political and security developments such as the nuclear and missile programs,” Michel stressed. “We continue to take a neutral and independent approach, in particular in the fields of health, disability assistance and separated families.”