Various types of Costa Rican coffee will be showcased at the Coffee Expo Seoul at Coex from Apr. 5-8.

Costa Rica is the host country of the global event, with several of its coffee producers and exporters participating and presenting their sustainable production methods. They will also hold coffee-making sessions and expand their networks with Korean buyers and consumers.

The Costa Rican Embassy, Costa Rica Coffee and Costa Rica Foreign Trade Promoter, Procomer, have collaborated to bring together a successful trade delegation to Korea, where Costa Rica supplies 4.5 percent of all coffee. 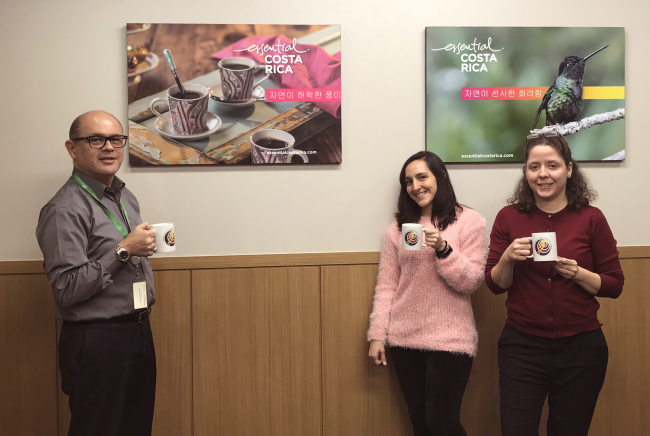 Korea’s domestic coffee market reached 11.7 trillion won ($10.8 billion) last year, and the demand for the beverage continues to rise, according to data by the Korea Customs Service. The figure is more than triple the amount of 3 trillion won a decade ago, and translates into 26.5 billion cups last year at an average 512 cups per person.

The data showed that while people drank more, the price of a cup of coffee had also shot up over the last decade, with increasingly more people opting for high-end brands. The country’s per capita coffee consumption still stands far below the United States, Germany and many European countries, signaling there is still considerable room for further expansion, according to industry insiders.

“Korean consumers look for highly specialized flavors. They are students of quality,” said Mario Arroyo, promotion and information manager at the Costa Rica Coffee Institute. “As they like to know where the coffee comes from, our focus on traceability and sustainability will help Costa Rican coffee gain a stable footing in the Korean market.”