[ The Korea Herald – Send E-mail ]
Seoul seeks to rally support ahead of inter-Korean summit
By Choi He-suk
Published : Mar 7, 2018 - 16:21
Updated : Mar 7, 2018 - 16:38
Top South Korean national security officials are set to head to the US on Thursday, as Seoul seeks to rally support from its allies in its efforts to engage North Korea ahead of the inter-Korean summit slated for end of April.

The trip will be undertaken by National Security Office chief Chung Eui-yong and National Intelligence Service Director Suh Hoon, who returned from Pyongyang on Tuesday with an agreement for the inter-Korean summit. Chung and Suh will also travel to China, Japan and Russia -- countries that are party to the long-stalled Six Party Talks along with the US and the two Koreas -- in an attempt to rally their support. 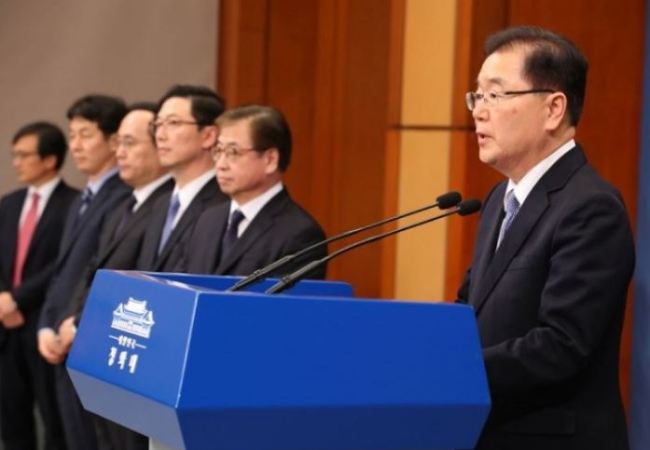 National Security Office chief Chung Eui-yong announces the results of the special envoys` trip to North Korea on Tuesday. Yonhap
The plans for the inter-Korean summit comes at a time when Seoul is nearly out of options. The North claims to have completed its nuclear armament program, while the US has rolled out sanction after sanction in its “maximum pressure” campaign. Seoul, on the other hand, has no real means to pressure Pyongyang, with all inter-Korean projects having been shut down in previous administrations.

While the situation surrounding the Korean Peninsula is dependent in large part on the US and other major powers, experts say that the summit will be an opportunity for President Moon Jae-in.

“The meeting will be significant to both leaders in terms of diplomacy. Moon has been moving cautiously, and has made no promises that cannot be kept. Such prudence should be maintained,” Asan Institute for Policy Studies research fellow James Kim said.

He added that Seoul cannot make too many demands or make too many concessions at the summit, and that Moon should use the occasion to build trust.

Chung’s trip to the US, among others, will be an opportunity for Seoul to fulfill its self-appointed role of ”matchmaker“ between Pyongyang and Washington. 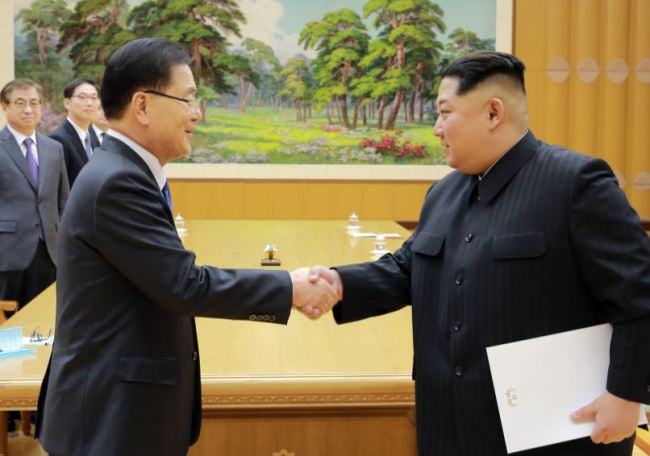 Chung Ei-yong shakes hands with North Korean leader Kim Jong-un in Pyongyang on Monday, March 5. (Yonhap)
For now, US President Donald Trump appears to be taking a cautious approach, referring to the developments as “possible progress” and warning that the US maintains the ability to add further pressure saying “but the US is ready to go hard in either direction!‘’ in a Twitter message.

Experts say which direction the US takes is up to the North Koreans’ actions in the run-up to the summit.

“For the inter-Korean summit to bring results Moon has talked of, there must be meaningful developments in denuclearization between North Korea and the US,” Sejong Institute researcher Woo Jung-yeop said.

“It depends on how fast North Korea moves. If the summit deals only with improving inter-Korean relations, it would mean that desired results are not obtained. This is something our government is likely concerned about.”

In addition to the summit plans, Pyongyang agreed to withhold nuclear and missile tests -- while dialogue is ongoing -- and said that it is willing to discuss denuclearization and to seek talks with the US.

According to Chung, Kim Jong-un did not attach any preconditions for such steps, only that North Korea be “considered a serious party in the talks.”

Frank Aum, senior expert on North Korea at US Institute of Peace, said that while the developments are positive, there may be hidden hurdles.

“The recent inter-Korean agreement is a promising development, and definitely a positive signal compared to the last year of tension,” Aum said.

“But it’s not a game changer when viewed in light of the past 30 years of negotiations. North Korea‘s price for denuclearization will be extremely high and a price that I’m not sure the United States is willing to pay.”