[ The Korea Herald – Send E-mail ]
Are hurdles cleared for US-NK talks?
By Ock Hyun-ju
Published : Mar 7, 2018 - 16:25
Updated : Mar 7, 2018 - 18:26
After North Korea said it was willing to discuss denuclearization with the US, both hope and skepticism are growing over a potential diplomatic breakthrough between Washington and Pyongyang.

US President Donald Trump hailed the North’s offer to denuclearize as “very positive” and “sincere.” He also said in the Oval Office it would be “a great thing” for the world, North Korea and the peninsula, adding he will “see what happens.”

In what many see as an unexpectedly bold move, North Korean leader Kim Jong-un said that he is willing to “candidly” discuss the country’s nuclear disarmament with the US, according to Chung Eui-yong, President Moon Jae-in’s top security adviser and special envoy to North Korea.

In exchange, Chung said that the North wants an end to military aggression and a guarantee of his regime’s safety. The North also offered to suspend nuclear and ballistic missile tests while dialogue is underway. 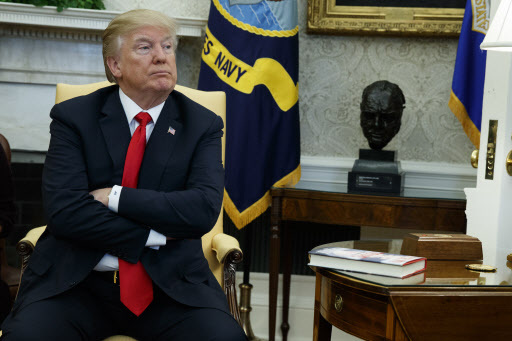 (Yonhap)
Trump also said on his Twitter account that “possible progress” had been made and that “a serious effort” was made by all sides. “May be false hope, but the US is ready to go hard in either direction!” he added.

But other officials voiced skepticism over the North’s peace overture.

“Maybe this is a breakthrough. I seriously doubt it,” Dan Coats, director of national intelligence, told a Senate hearing Tuesday, citing what he called failed efforts by previous US administrations to negotiate with North Korea over its nuclear program. “We have seen nothing to indicate ... that he would be willing to give up those weapons.”

Vice President Mike Pence said in a statement that “all options are on the table and our posture toward the regime will not change until we see credible, verifiable and concrete steps toward denuclearization.”

“I think North Korea has demonstrated sufficient willingness, at least in the court of public opinion, to engage with the US,” Frank Aum, a senior expert on North Korea at the US Institute of Peace.

“So I think it will be very difficult for Washington to not engage with Pyongyang. Otherwise, it risks being perceived by the world as obstructing peace and stability on the Korean Peninsula.”

But it remains to be seen whether that is enough for the US, he said, citing Pence’s remark that the US’ posture toward North Korea would not change until North Korea takes steps to “completely, credibly, and verifiably denuclearize.”

“So we’ll have to wait and see whether the US seizes this opportunity for talks,” he said.

If talks between the US and North Korea start, it will take the form of “exploratory discussions” and will happen before an agreed inter-Korean summit takes place at the end of April, said James Kim, research fellow at the Asan Institute for Policy Studies.

But it remains to be seen whether it could lead to meaningful progress to bring lasting peace to the Korean Peninsula, he said.

“North Korea made concessions, but the US stands firm that it will step up its ‘maximum pressure’ campaign on North Korea unless it agrees to denuclearize,” he said. “Now, we need to see how North Korea would react to it.”

“This is just the beginning and there is a long way ahead dotted with many stumbling blocks,” he said. “We first need to know what North Korea means when it says denuclearization.”

North Korea fell short of clarifying what it meant by “denuclearization” -- whether it would abandon its nuclear weapons programs in a verifiable manner or it would only reduce its nuclear arms.

Further complicating matters, the North attached the conditions that its security should be guaranteed and military aggression toward the communist state should be defused for it to start talks with the US on denuclearization.

With the possible diplomatic opening between North Korea and the US, South Korea is more than ever in a critical moment, he said. If North Korea and the US sit down for talks and achieve no results, it would only give grounds to the Trump administration to consider a tougher line on the North.

"What I am worried about is a possible crack in the South Korea-US alliance when inter-Korean talks proceed without any progress in dialogue between the US and North Korea,” said Kim Hyun-wook, a professor at the National Korean Diplomatic Academy.

“The South Korean government should continue to make sure that a thaw in inter-Korean relations keeps pace with a progress in relations between the US and North Korea.”

Mindful of the situation, Moon’s top national security adviser Chung and National Intelligence Service chief Suh Hoon are scheduled to travel to Washington on Thursday to brief US officials on the result of their meeting with the North Korean leader.

Chung said that he has a separate message from North Korea for the US, which was undisclosed to the public.

President Moon also said Wednesday during a meeting with political party leaders that “we are only at the starting line” and “inter-Korean talks won’t be enough to achieve peace.” He also warned that it was “too early to be optimistic” about the North’s offer to talk to the US about denuclearization.