White, 31, won the medal at Phoenix Snow Park in the Olympics host town of PyeongChang, Gangwon Province, with the top score of 97.75 points.

Before PyeongChang, the US had 96 gold medals at the Winter Games. 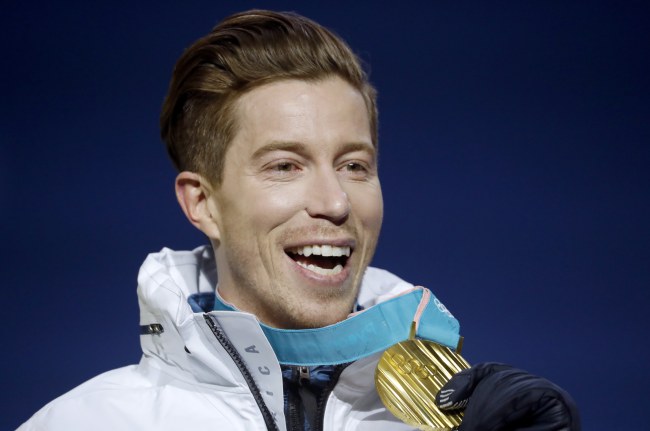 Kim and Kam earned a disappointing 42.93 points with a one point deduction, lagging far behind their personal best of 55.02 points and also falling short of the 52.10 points they scored in the team event last week.

Meanwhile, the North Korean duo of Ryom Tae-ok and Kim Ju-sik performed a clean program to receive a personal best score of 69.4 points and place 11th. In the arena, a North Korean cheering squad enthusiastically rooted for the Ryom-Kim pair.

With the first triple twist throw giving them the highest 7.3 points, Ryom and Kim went through their planned program without error, including a triple loop and a throw triple loop.

“It has been convenient during our stay in the South,” Kim said. “As I skated here, we could really feel the power and the energy of the Korean people.”

Only the top 16 teams after the short program are eligible to skate in the free program slated for Thursday.

There are a record 102 gold medals up for grabs at this year’s Winter Olympics from Feb. 9-25, with nearly 3,000 athletes from 92 countries participating.

In luge the women’s singles on Tuesday night, Germany’s Natalie Geisenberger won gold, followed by her fellow countrywoman Dajana Eitberger, who took silver, and Alex Gough of Canada with bronze.

Sweden’s Stina Nilsson, a Sochi bronze medalist in 2014, grabbed her first Olympic title in the women’s sprint classic cross-country race on Tuesday, completing the course in 3 minutes 3.84 seconds, 3.03 seconds ahead of Maiken Falla of Norway. Yulia Belorukova won bronze for the Olympic Athletes of Russia.

On Tuesday night, South Korea’s Kim Min-seok picked up bronze in the men’s 1,500-meter speedskating, becoming the first Asian to win an Olympic medal in the event.

With his win, the 18-year-old skater became the first Asian to make the podium in the men’s 1,500 meters competition at the Winter Olympics, leaving hope for further success in the team pursuit and mass start events.

“It sounds surreal and I don’t know if that’s ever going to sink in,” said Lawes, a 29-year-old from Winnipeg, Manitoba, at the Gangneung Curling Centre in Gangneung, one of two cities hosting PyeongChang events. “The first one hasn’t sunk in yet to be honest. To be able to bring home another gold medal, with John, is an absolute honor.”

The Canadians’ victory over the defending world champions was a historic moment for mixed doubles, which made its Olympic debut at PyeongChang. The mixed doubles has proven to be highly popular with players and fans the world over.

“I think that if someone’s going to try curling for the first time, this mixed doubles is where it’s at,” Morris said. “It’s quick, it’s fast-paced, it’s very athletic and it’s so much fun to play. And you don’t need four players. I’m really proud of us for coming here and helping put mixed doubles on the map.”

Russia has been suspended from PyeongChang due to its state-sponsored doping at the 2014 Sochi Games.

“I want to fight to prove my innocence because I don’t remember (taking the drug) and it’s incomprehensible,” he said in a statement.