Kim finished with a time of 1 minute, 44.93 seconds in the race at the Gangneung Oval, following Dutchmen Kjeld Nuis and Patrick Roest, who took the gold and silver medals, respectively.

The South Korean became the first Asian speed skater to rise to the podium in the men’s 1,500m competition in the Winter Olympics.

Arianna Fontana of Italy snatched the gold medal in the women’s 500 meter race on Tuesday with a 42.569 seconds, where South Korea’s Choi Min-jeong was disqualified for making a last split-second body contact before finishing second in the tight race. As a result of Choi’s exit, the Netherlands’ Yara van Kerkhof won silver and Canada’s Kim Boutin won bronze. 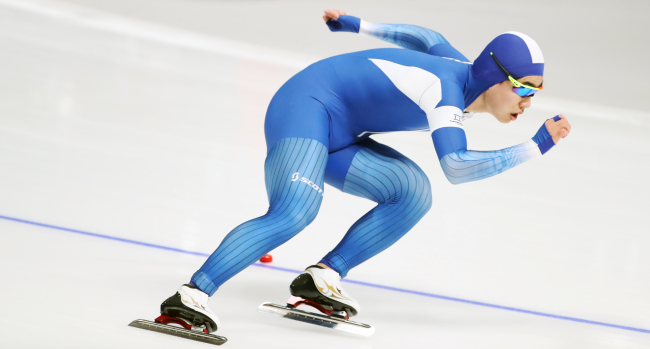 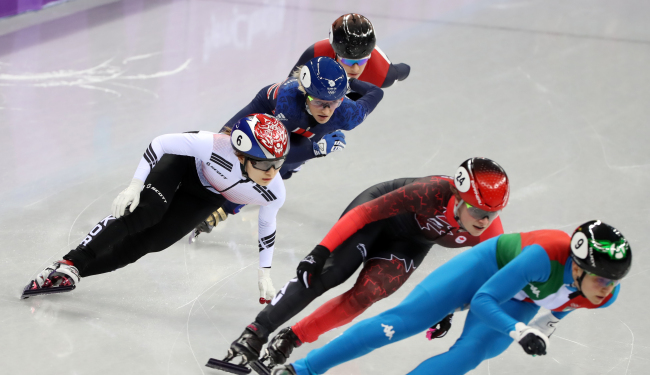 At Jeongseon Alpine Centre in Gangwon Province, Hirscher, 28, finally realized his dream of winning a long-overdue gold medal. It was the Austrian’s third showing at the Olympics, where he earned a Sochi silver in 2014 and never finished below fifth in any race.

“I’m super happy because now this stupid question has gone away, if I’m thinking that my career is perfect without a gold medal,” Hirscher said. “Now the question is … deleted.” 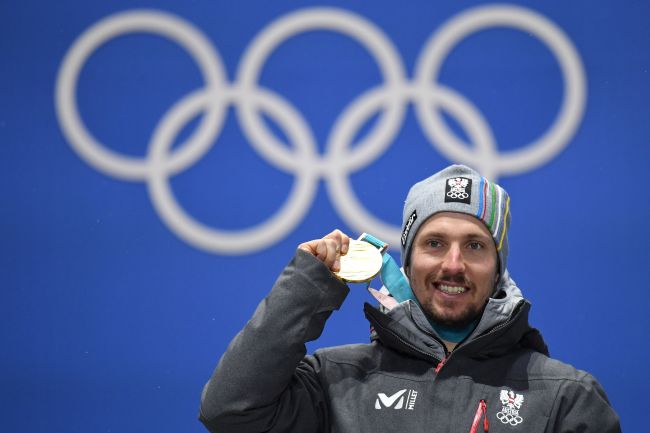 Austria's gold medallist Marcel Hirscher poses on the podium during the medal ceremony for the Men's alpine skiing combined at the Pyeongchang Medals Plaza during the Pyeongchang 2018 Winter Olympic Games in Pyeongchang on February 13, 2018. (AFP/Yonhap)
Earlier in the day, Chloe Kim of the United States soared high on the halfpipe to be crowned the queen of snowboarding, gratifying long-held expectations that she would end up as the top finisher at the 2018 Games.

The 17-year-old from Torrance, California, took firm control of her course on the frosty ramp in the women’s final at Phoenix Snow Park in PyeongChang, and finished with a score of 93.75 on the first of her three finals runs. She then upped her score with a near-perfect 98.75 on her last run, having already secured the gold in hand.

Kim is Korean-American, as her parents emigrated from the host country for the PyeongChang Games in Gangwon Province.

“I don’t really know what’s happening and I’m actually feeling a little anxious right now,” Kim said. “I’m a little overwhelmed. But this is the best outcome I could ever ask for and it’s been such a long journey. Ahhh, just going home with the gold is amazing.”

With members of her family, including her 85-year-old South Korean grandmother, painstakingly zooming in on her every twist and turn from the stands, Kim delivered a prodigious performance that outshone her pre-Olympic limelight. In the opening set, she threw in a 1080 -- three soaring twists above the pipe, considered among the most difficult in the sport -- and followed it with a pair of flips.

With the gold, Kim became the youngest woman to win an Olympic snowboarding medal. 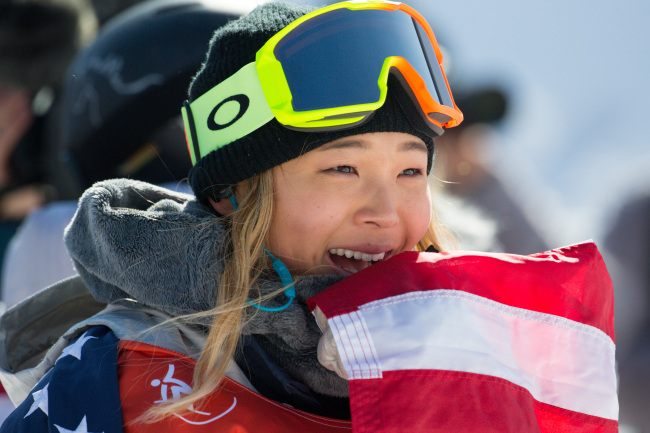 Chloe Kim of the United States celebrates after winning gold in the Ladies' Halfpipe finals at the 2018 Pyeongchang Winter Olympics at Phoenix Snow Park in Pyeongchang, South Korea, on February 13, 2018. Kim took gold in the event with a score of 98.25. (UPI)
Liu Jiayu of China took silver with an 89.75, becoming the first Chinese athlete to grab a snowboarding medal at the Olympics. American Arielle Gold took bronze with an 85.75.

With Kim’s triumph, Team USA has now swept all three of the snowboard gold medals at the Winter Games. Red Gerard and Jamie Anderson won men’s and women’s slopestyle events, respectively, over the previous two days.

Meanwhile, many female snowboarders expressed anger over the organizing committee’s decision to press ahead with the slopestyle final as scheduled Monday, despite vicious winds that led many athletes to tumble. The International Olympic Committee and International Ski Federation upheld the decision, adding the safety of athletes was their top priority. 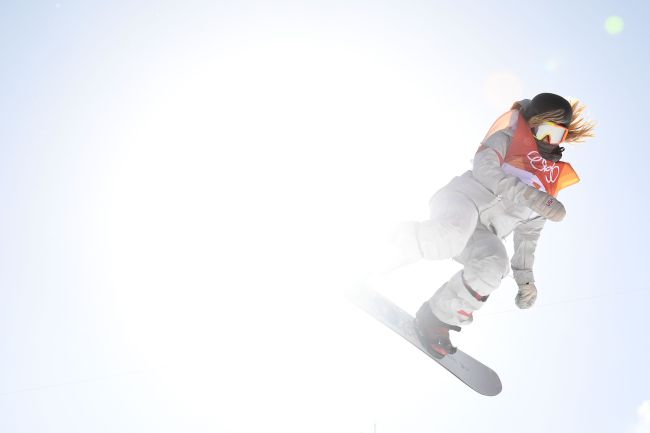 Chloe Kim of the United States celebrates after winning gold in the Ladies' Halfpipe finals at the 2018 Pyeongchang Winter Olympics at Phoenix Snow Park in Pyeongchang, South Korea, on February 13, 2018. Kim took gold in the event with a score of 98.25. (AFP)
In speedskating on Monday, the Netherlands’ Ireen Wust passed her countrywoman and track and field legend Fanny Blankers-Koen’s record of four Olympic gold medals, winning a fifth.

Not only did Wust become the Netherland’s first Olympian to grab five gold, the event landed her a staggering 10 Olympic medals in total, moving her past equestrian great Anky van Grunsven for the most medals clinched by a Dutch competitor at either the Winter or Summer Games.

In the curling mixed doubles bronze match held in Gangneung on Tuesday morning, the Olympic Athletes from Russia beat Norway 8-4.

Maren Lundby of Norway on Monday jumped a near-perfect final leap to snatch the ski jump gold medal ahead of Katharina Althaus of Germany and Sara Takanashi of Japan.

South Korea’s performance has been rather lackluster through Tuesday, with the exceptions of Lim Hyo-jun’s gold in the men’s 1,500 meters short track speedskating event Saturday and Kim Min-seok's bronze.

In freestyle skiing Monday, men’s mogul skier Choi Jae-woo lost control and fell on his second jump at Phoenix Snow Park in PyeongChang, failing to reach the third final stage. The joint women’s hockey team of South Korean and North Korean players suffered its second 8-0 drubbing, this time to Sweden, Monday, ending any glimmer of hope for winning a medal. Korea will face Japan in the final Group B game Wednesday.

A combination of frigid weather, gusty winds and other unpredictable elements have plagued PyeongChang.

The showpiece alpine skiing men’s downhill event has been postponed to 11 a.m. Thursday at the Jeongseon Alpine Centre in Jeongseon, Gangwon Province. The super-G event was also pushed back to 11 a.m. Friday, as was the women’s giant slalom event, which was originally scheduled for Monday morning and delayed to Thursday.