Kim Young-sun, the center’s secretary-general and Korean ambassador to Indonesia from 2011-14, received a “Visit ASEAN at 50” certificate award from Thai Minister of Tourism and Sports Weerasak Kowsurat at the 37th ASEAN Tourism Forum in Chiang Mai, Thailand, on Friday.

The accolade is given to the regional bloc’s partnering organizations that have helped promote tourism of the 10 member states: Indonesia, Malaysia, the Philippines, Singapore, Thailand, Brunei, Cambodia, Laos, Myanmar and Vietnam.

Last year was the 50th anniversary of the multilateral organization and designated year of cultural exchange between ASEAN and the Republic of Korea. Other recipients of the award for this year are the ASEAN Tourism Association and AirAsia. 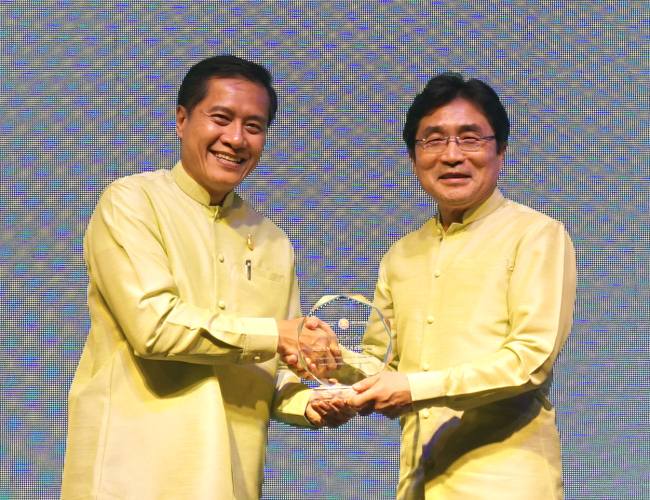 “Furthermore, we have run capacity-building programs for tourism professionals from ASEAN, introduced its community-based tourism to Korean university students and organized ASEAN food festivals by inviting chefs from the 10 member states.”

Southeast Asia is the top international travel destination for Koreans, who are increasingly venturing overseas in search of unique and popular destinations. The number of two-way visitors reached 10 million last year, aided by the commitment of the Korean government, which has vowed to strengthen bilateral human exchanges for a shared “people-centered community.”

Southeast Asia is full of diverse cultural heritage and natural environs, many of which combine to form exotic places, according to the center. There are 38 UNESCO cultural and natural heritage sites, and sustainable forms of tourism are rising, including eco-tourism and community-based tourism allowing visitors to mingle with locals and immerse in their lifestyles. Furthermore, ASEAN’s variegated cuisines are becoming increasingly popular all across the world, particularly in Korea.

Since the entry into force of the ASEAN-Korea Trade in Goods Agreement in June 2007, bilateral trade in goods has grown by 9.2 percent annually, reaching $125 billion in 2016, and making Korea ASEAN’s fifth-largest trade partner. ASEAN is Korea’s second-largest trade partner and top investment destination, and the two sides are working to reach $200 billion in bilateral trade by 2020.