In director Lee Jang-ho’s 1980 film “A Fine, Windy Day,” the pojangmacha is a place where members of Seoul’s growing underclass meet daily to talk about their pains, gains and fantasies over cheap food and soju.

In a country notorious for its die-hard drinking, pojangmacha — meaning “covered wagon” in Korean and referring to a tented outdoor food stall — have been at the center of Korea’s after-work camaraderie.

Thirty-seven years have passed since the release of movie that portrayed the country’s desires and changing appearance. Pojangmacha, like many of the film’s scenes, have since faded to a distant memory for many Koreans. 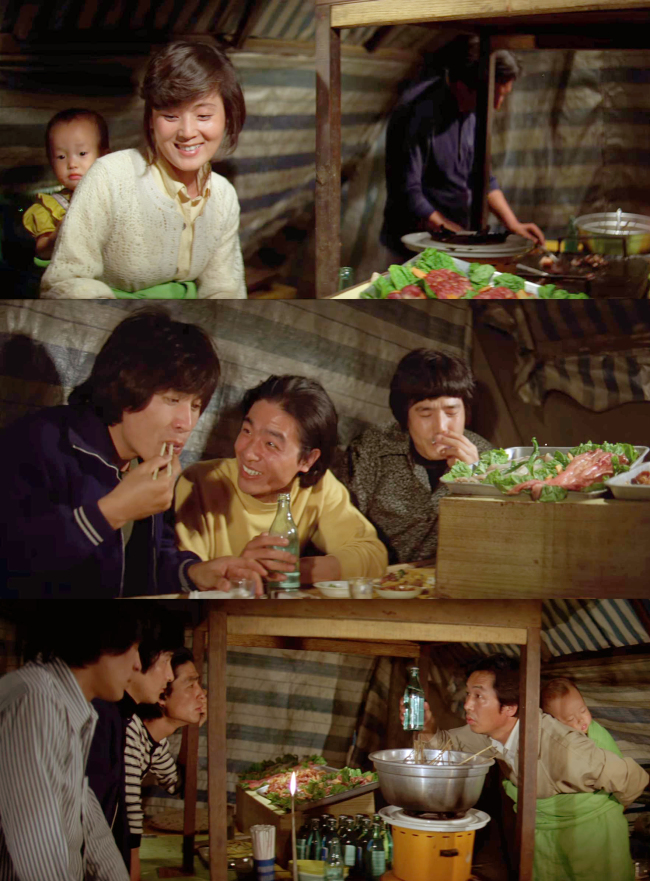 The 1980 film “A Fine, Windy Day,” directed by Lee Jang-ho and featuring Ahn Sung-ki, is one of many Korean movies featuring pojangmacha (“A Fine, Windy Day”)
“We don’t come to pojangmacha often, but when we meet we always come here,” said Dono Kim inside a pojangmacha in Donui-dong near Jongno 3-ga Station in Seoul, on a cold winter evening. Sipping a shot of soju with grilled smelts and a mussel soup next to his friend of more than 60 years, he added, “We used to drink here a lot 20 to 30 years ago. We knew everyone, every household around this area, which was where we grew up.”

In the cramped, damp space the size of a one-room apartment, customers’ conversations mingled, growing louder, even quarrelsome at times, as the evening drew on. Amid the cacophony, the lady owner busily prepared food, haggled with her clients, and occasionally invited in passersby who gazed into her business.

“Young folks don’t know, but Gangnam (south of the Han River) feels rather difficult for us. We feel like strangers there,” Kim said. “Gangbuk is our hometown.”

Kim described bars and lounges that younger people preferred as pretentious and having too many rules of etiquette.

“When you get older, you don’t like formalities. You want something simple, like this pojangmacha,” he said. “Even the sight of old drunkards you see on the streets, chattering, smoking, spitting and cursing, looks adorable. Drinking here brings back good old memories.” 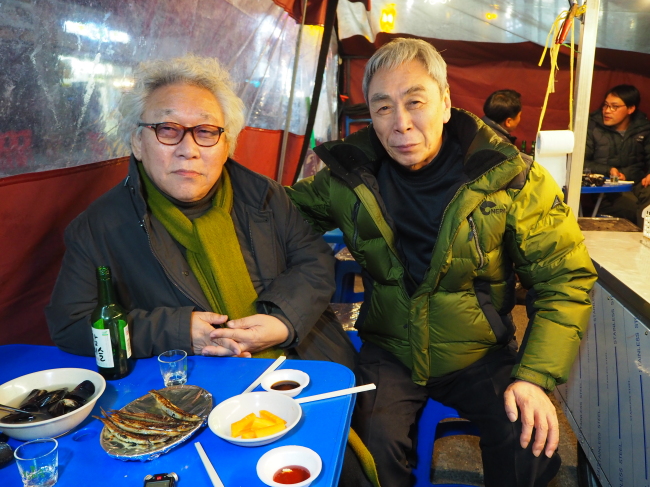 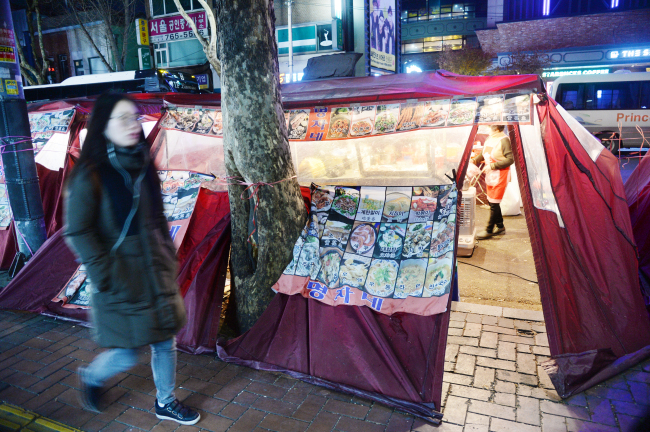 A pojangmacha in Donui-dong near Jongno 3-ga Station in northern Seoul (Park Hyun-koo)
Lying outside legal protection, pojangmacha are generally operated based on a commercial right granted by the government to disadvantaged people, such as the disabled. They are mostly in Gangbuk — the area of Seoul north of the river — and provincial cities nowadays.

Kim, in his 70s, said he spent much of his 20s and 30s in the Middle East as a construction worker. He worked in Saudi Arabia for two and a half years, during which he came home once a year.

“Every time I saw a Korean national emblem on a Korean Air plane flying across the Saudi sky, tears dripped down my face because I missed home so much,” he said. “Because we worked our butts off in those days, Korea has become rich and young people are living comfortably today.”

Gong Bo-bae, 62, the owner, said she has been running the pojangmacha for 20 years, ever since her family’s fortune started waning in the wake of the Asian financial crisis of 1997. Her business had continually shrunk over the last five years she said.

“Do you know how difficult it is?” she asked, adding that because the pojangmacha is by the roadside, she has to set up the tent and the whole paraphernalia every day when she opens it at 6 p.m., and disassemble it at 5:30 a.m. to be stored at a nearby facility. The peak time is from 8 p.m. through midnight, and peak seasons are spring and autumn, she noted. 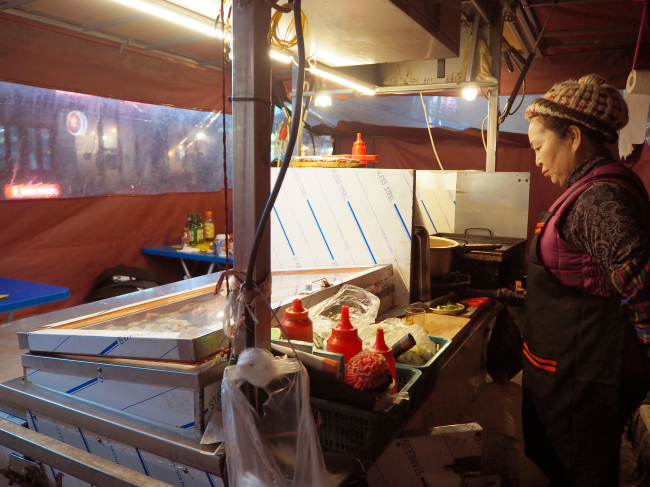 Gong Bo-bae, 62, the owner, has been running her pojangmacha for 20 years, since her family’s fortune started waning in the wake of the Asian financial crisis of 1997. (Joel Lee/The Korea Herald) 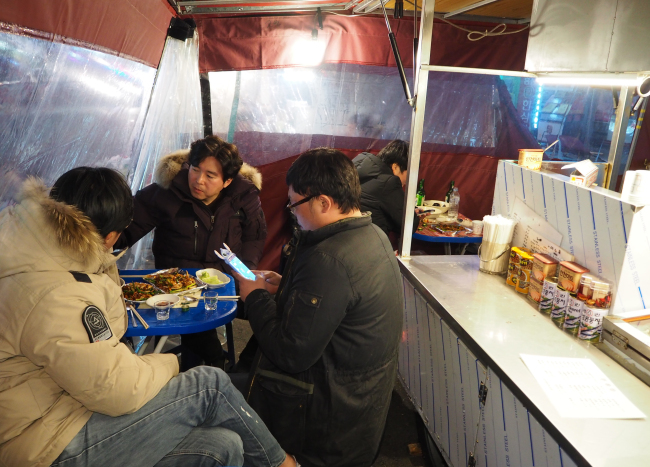 “There is no pleasure or reward in doing this. I just trudge along day to day to survive. I will continue to subsist here as long as my heath allows. With no savings, I have no other alternative for livelihood,” Gong conceded.

Kim Jung-duk, chief executive officer of Danji Food and Beverage, a restaurant franchise consulting firm, told The Korea Herald that the demise of pojangmacha had been accelerated by the increasing use of credit cards.

Another reason for the declining popularity is competition from franchises offering similar menus in permanent locations, Kim said. He mentioned countrywide chains such as Hanshin Pocha, which replicates the feel of a pojangmacha at large outlets.

Also the gentrification of tastes, particularly among the young with no attachment to the venue, played a role.

“The commercial space for pojangmacha will get increasingly smaller,” he said, suggesting they could be revived by commercializing them at permanent locations like in Yeosu, South Jeolla Province, where it is a harbor-front attraction.