Holodomor -- meaning “death by hunger” in Ukrainian -- took place from 1932-33 across Ukraine, then part of the Soviet Union, killing an estimated 7-10 million people. The man-made disaster was carried out under the order of Joseph Stalin, who saw a nationwide famine as instrumental in forestalling a Ukrainian independence movement, according to scholars.

“Eighty-five years ago, the Ukrainian nation faced a disaster that should not have happened on our fertile land,” said Ukrainian Ambassador to Korea Olexander Horin on Wednesday at the National Assembly in Seoul, where a photo exhibition on Holodomor was held for two days. 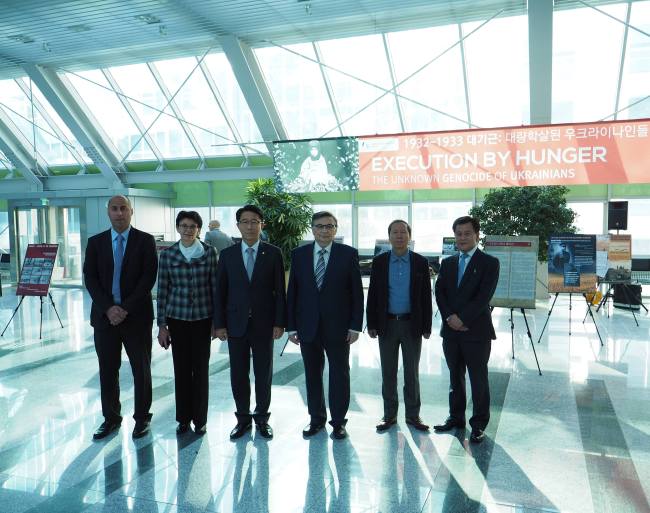 From left: Georgian Ambassador to Korea Otar Berdzenishvili; spouse of the Ukrainian ambassador Nataliia Tymoshenko; Rep. Cho Jeong-sik, member of the National Assembly and chairman of the Ukraine-Korea Friendship Association; Ukrainian Ambassador to Korea Olexander Horin; Ukrainian Honorary Consul in Korea Lee Woo-jong; and businessman Lee Young-chae (Ukrainian Embassy)
“It is important to tell the story of Holodomor, since there is no certainty that such an event will not repeat itself in today’s world. On the contrary, signs of genocide are seen in our modern world, and we should learn Holodomor’s lessons to avoid such crimes in the future and confront those who plan and organize them.”

Ukraine has recognized the event as genocide, and the Ukrainian parliament has urged its international partners to acknowledge it as the crime of genocide, the embassy told The Korea Herald.

Holodomor was the result of a “well-planned Kremlin policy,” the diplomatic mission said, adding the Soviet government confiscated all food from Ukrainian villages en masse, followed by isolating them and forbidding people to leave the country.

“Collective farms and villages were surrounded by armed militias and Soviet Special Forces. All food stocks were taken, and trade and import of any goods were prohibited. It was a death sentence for residents,” the envoy said.

Furthermore, the Soviet Union’s People’s Commissar for Foreign Affairs deliberately blocked information about Holodomor across the vast expanse of the communist union, while at the same time blockading foreign aid. It was done to suppress national desires for independence, which grew among Ukraine’s economically independent peasants and educated intelligentsia.

Holodomor is officially considered as genocide by 16 countries around the world, a criminal act of the Soviet Union by six countries and a tragedy or crime against humanity by five international organizations. Aside from Ukraine, it is remembered in Canada, the United States, Poland and other countries through various annual commemorations organized by community groups and religious institutions.