[ The Korea Herald – Send E-mail ]
‘Liberal Islam reconcilable with globalization’
“We never had radical confrontation between Shias and Sunnis throughout history. Our government fully subsidizes all religious institutions and their places of worship regardless of faith.”
By Joel Lee
Published : Oct 31, 2017 - 19:20
Updated : Oct 31, 2017 - 19:37 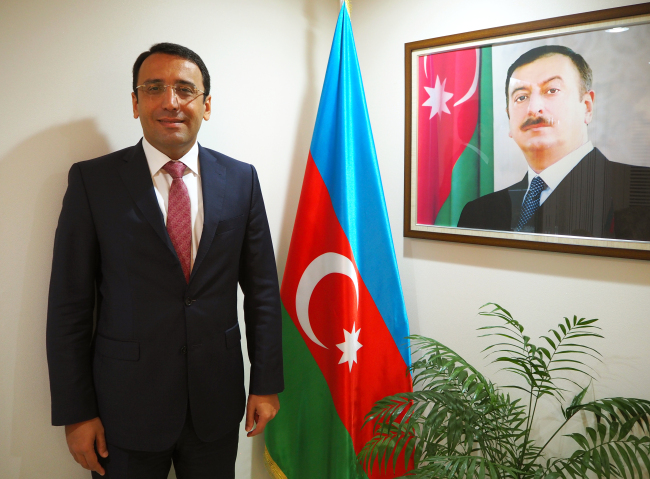 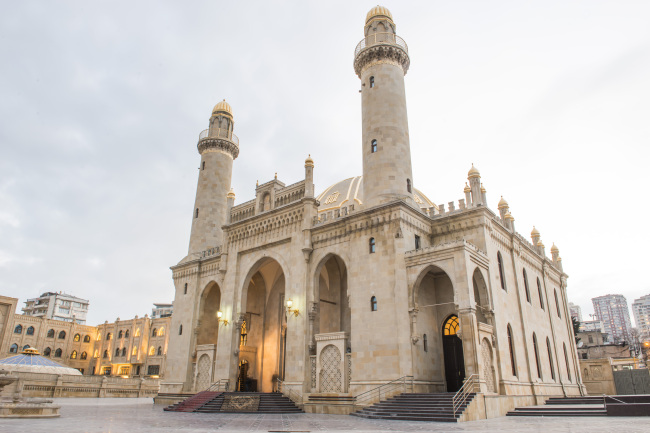 Taza Pir Mosque in Baku (Azerbaijani Embassy)
In Azerbaijan, mosques, synagogues, churches and temples fill the landscape forming a kaleidoscopic mosaic. Shia and Sunni Muslims pray side by side inside mosques, a rare scene in the Islamic world where intra-religious tensions have remained toxic over centuries.

That the Muslims -- regardless of their denomination and background -- practice their faith in harmony, is a demonstrable evidence of Azerbaijan’s religious tolerance and moderation, according to the country’s top envoy to Korea.

Ambassador Ramzi Teymurov stressed that religion being liberal in a world of connectivity and coalescence is more consonant with global trends, such as secularism, scientific progress and democracy.

Azerbaijan is a country strategically straddling Europe and Asia in the South Caucasus. It is a predominantly Muslim society, with nearly 98 percent of people practicing Islam. Shia believers account for roughly 60 percent of Muslims, the remainder being Sunni adherents, according to Teymurov. 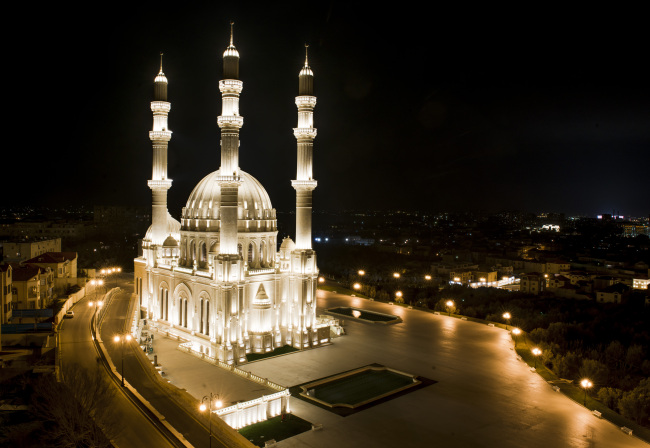 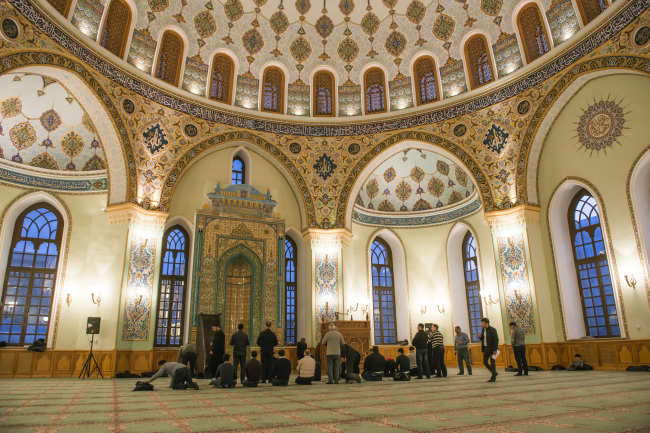 Heydar Mosque in Baku (Azerbaijani Embassy)
“We have always been known as a nation of tolerance,” the envoy told The Korea Herald at the recently reopened embassy in Hannam-dong, Yongsan District, in Seoul last week. “We never had radical confrontation between Shias and Sunnis throughout history. Our government fully subsidizes all religious institutions and their places of worship regardless of faith.”

Although Azerbaijan has had contentious, at times inimical, relations with neighboring Armenia, which currently occupies 20 percent of Azerbaijan’s internationally recognized territory, the country has been embracing of Armenian religious institutions, Teymurov pointed out.

He cited the example of the Saint Gregory the Illuminator Church, commonly known as the Armenian Church of Baku: the only Armenian monument in the Azeri capital that survived the Soviet Union’s anti-religious atheist campaign, the Armenia-Azerbaijan conflict as well as the expulsion of some Baku Armenians.

Azerbaijan is a constitutionally secular state. The supreme law codifies that religion acts separately from the government, and all religions are equal before the law. Education is also secular.

The ambassador warned against what he sees as “incorrect understanding of Islam” -- that it is violent, dangerous and fundamentalist. “Islam by nature is liberal,” he said. “Some radical groups have been promoting a brand of Islam that is ultraconservative and extremist, but that is not true Islam. If you read carefully what the Quran says and what its philosophy teaches, Islam is a religion of peace. It never instructs people to kill anyone in its name, or instigate terrorist activities.”

Religious practice is a private realm between God and the believer, and the third party has no right to interfere in the relationship, he added. 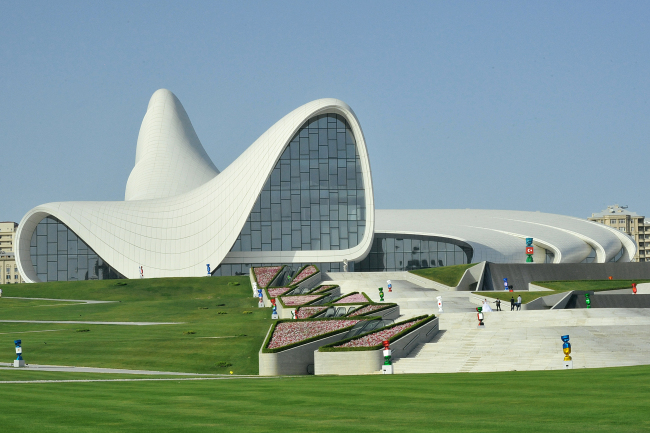 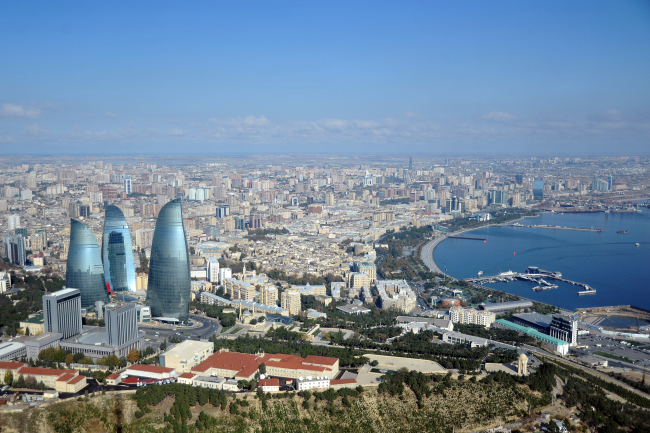 Azerbaijan's capital Baku (Azerbaijani Embassy)
Pointing to negative portrayals of Islam by Western politicians and media outlets, which zoom in on violence and terrorism, the diplomat said such a narrow perspective only amplifies misperceptions. He also said journalists have a critical role to play in articulating public opinions, as Korea increasingly becomes a multicultural, multi-ethnic and multi-religious society. The envoy urged media professionals to turn their attention to Islam’s rich culture, heritage and scholarship and shed light on them.

“Religious architecture and artefacts can be great sources of national promotion,” Teymurov said, pointing to Orthodox, Albanian and Catholic churches, various mosques and synagogues, as well as ancient fire temples and contemporary edifices inspired by Zoroastrianism and its fire worship in Azerbaijan.

As an example, he mentioned the Heydar Aliyev Center in Baku, an exotic, amorphous building designed by late Iraqi-British architect Zaha Hadid (1950-2016) -- the architect of Seoul’s landmark Dongdaemun Design Plaza -- named after the country’s late president from 1993 to 2003. Being at the crossroads of the East and West, Azerbaijan also has numerous architectures embodying Soviet, Russian and European styles in an eclectic harmony, he said.

“Over the past 2 years, the number of tourists from worldwide visiting our country has increased substantially, and particularly those from the Middle East doubled to half a million last year,” said the envoy. “As we are trying to be a hub of tourism and international convention, we have hosted many cultural and sports events, including the 4th World Forum on Intercultural Dialogue in Baku, Eurovision Song Contest in Baku in 2012, Baku 2015 European Games, 2017 Islamic Solidarity Games and 2017 Azerbaijan Grand Prix Formula One motor race.” 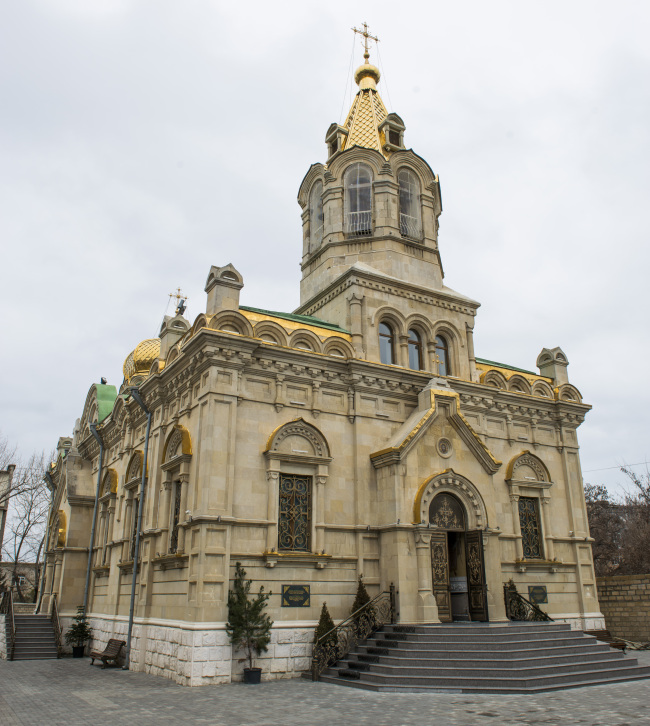 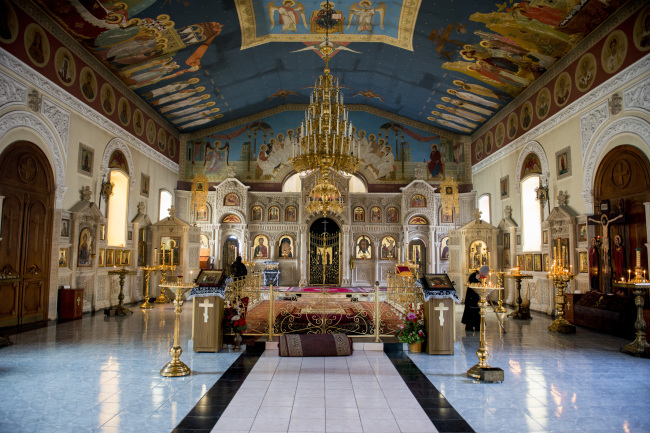