[ The Korea Herald – Send E-mail ]
[News Focus] Can Lee Jae-yong control Samsung from behind bars?
By Cho Chung-un
Published : Oct 16, 2017 - 16:48
Updated : Oct 16, 2017 - 18:07
With the resignation of Samsung Electronics’ practical commander in chief Kwon Oh-hyun on Friday signaling a large-scale personnel reshuffle, eyes are zeroing in on the group’s jailed heir Lee Jae-yong and how possible it would be for him to strategize, control and direct future steps from his cell.

According to experts who have studied Samsung and South Korean chaebol closely for years, there were cases of so-called “in-prison management” in the recent past, and it is highly likely for the 49-year-old vice chairman to follow suit.

“The primary jobs for chaebol owners are to gain a full grip of the firm by conducting personal reshuffle of top managers like presidents and also to make strategic decisions for the group’s future growth engine,” said Park Sang-in, a professor at Seoul National University’s Graduate School of Public Administration. “Those two jobs are something that can be done anywhere including inside jail. Other tycoons have done it, and so too can Lee Jae-yong.”

The sudden resignation of Kwon, who had led Samsung’s thriving chip business, fueled speculations among which was that the decision was made to pass the leadership baton to Lee and his people at Samsung.

Kwon, along with Choi Gee-sung, former head of the now-defunct Corporate Strategy Office, spent more than 30 years at Samsung and was regarded as a person loyal to the now-bedridden Chairman Lee Kun-hee, the father of Lee Jae-yong.

“Kwon’s announcement to leave Samsung signals that an era of Samsung led by Lee Kun-hee’s people has reached an end and the new era of Lee Jae-yong’s people has just begun,” said Park Ju-gun, co-president of CEOScore, a local corporate tracker. 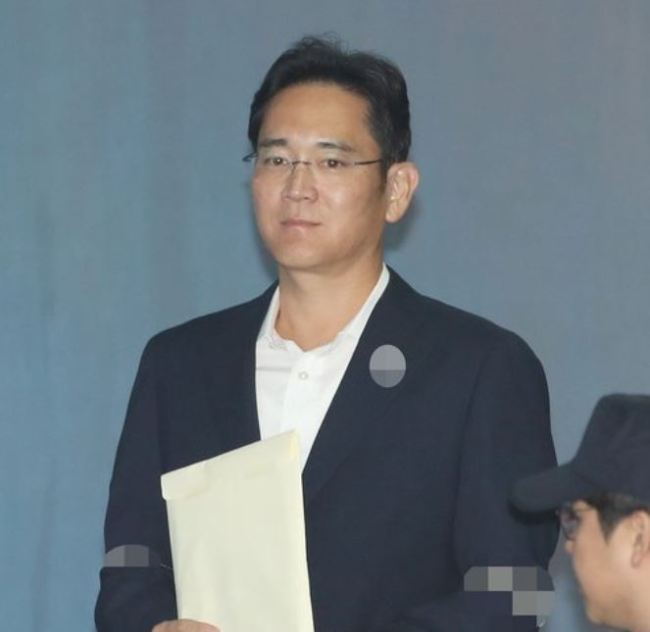 Samsung Electronics Vice Chairman Lee Jae-yong arrives at a high court in Seoul on Oct. 12, 2017, to attend the first hearing of an appeal trial on alleged bribery. In late August, Lee was sentenced to five years in jail for bribing former President Park Geun-hye and her longtime friend. (Yonhap)
Concurrently, rumors are also circulating that Lee is eyeing to launch a new office so that he could have more direct control on the Samsung empire during his time in jail. The envisioned office will be something different from the former one, according to reports quoting insiders.

The format would have to be different from the former one, which was effectively closed as part of Lee’s pledge to increase transparency as he had faced heavy grilling by lawmakers during a hearing on the presidential bribery scandal last year.

“As Lee is in big trouble and is facing a crisis, he has to figure out a way to control Samsung in jail. This is why he has to appoint people whom he trusts, to core positions like the head of boardroom,” said professor Park.

While Chey was serving his prison term for embezzlement between 2014 and 2015, for example, SK Group launched a top decision-making body called Supex Council to minimize the impact from the absence of the leader.

“SK’s Supex Council acted as a proxy to control the group. The only difference between Lee and Chey is that the Samsung heir hasn’t completed his succession scenario yet,” said professor Park, stressing that his incomplete succession could make him more worried and trigger an ugly family feud over shares Chairman Lee holds.

The ailing father holds 4 percent in Samsung Electronics and 20 percent in Samsung Insurance. Under the law, assets are inherited equally by sons and daughters, while spouses get half. The chairman has been hospitalized since a severe heart attack in 2014.

Meanwhile, Samsung refuted speculations of Lee controlling the tech giant in jail, saying that he is fully occupied with trials.

“It is possible for him to be briefed (during the visiting hours), but it does not make sense for the vice chairman to make such decisions in jail,” said a Samsung official who used to worked for Samsung’s former control tower.

“Even if the personal reshuffle is to happen, it will be done by experts such as people in human resource department who knows who will best fit into jobs, not Lee.”