Kwon Oh-hyun, who led Samsung Electronics’ thriving chip business and has recently emerged as the public face of the tech giant, said Friday that he will voluntarily step down from the post and would not retain his job as the head of board room that expires in March.

In his emotionally charged letter to Samsung employees, he felt that the timing is right for him to leave now, considering the nature of the fast-evolving IT industry. The leaders of Samsung‘s global partners nowadays are “young,” he said.

Local experts say Kwon’s departure reflects the tech giant, though in its thriving status, being pressed with a burden of uncertain future.

“Kwon’s decision seems to have been made by his burden of finding new growth engines for the semiconductor business,” said Park Ju-gun, founder of conglomerate watcher CEOScore.

Samsung’s most lucrative device solutions division is said to be facing a deadlock in its efforts to find a breakthrough for technological innovation and new businesses in response to a rapidly changing IT world.

Kwon described the record-high profit of the DS division as “luck” in a meeting with the country’s Industry Minister last month. 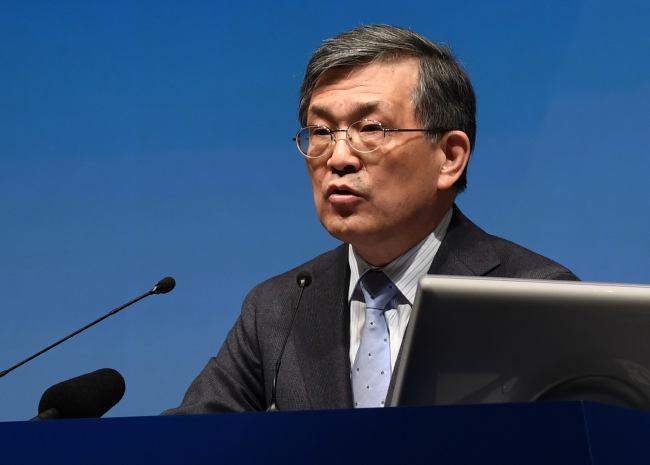 Samsung Electronics Vice Chairman Kwon Oh-hyun speaks during a shareholders' meeting in March. (Yonhap)
“Considering the DS division’s huge profit and size, it should have been taking the lead in seeking for a growth engine for Samsung overall, but it seems have lost it,” Park said.

Samsung in March acquired US Harman International in order to enter the vehicle electronics market, which was supposed to be a new growth factor for the DS division due to its characteristics of being a parts business.

However, Samsung’s consumer electronics and IT & mobile communications divisions are seemingly working more actively with Harman to bring new inventions to the market than the DS division.

Harman and Samsung’s IM business are currently developing an artificial intelligence platform by as early as next year.

“Kwon’s resignation will not only serve as a priming for appearance of new management leadership but also an opportunity for transformation into a B2B company, which means Samsung will still put much of its weight on the DS division,” Park said.

Rather than Kwon’s personal reasons, some experts interpret the announcement as a well-planned breakthrough strategy for imprisoned Lee Jae-yong.

“This can be the beginning of Lee Jae-yong’s in-prison management,” said Lee Byung-tae, professor of business management at Korea Advanced Institute of Technology. “A new form of control tower may soon appear to break through the current management crisis.”

Kwon’s decision largely stemmed from current difficulty in managing Samsung affiliates in the absence of the former Future Strategy Office that was disbanded in responsibility for Samsung’s involvement in the former president’s scandal, he said.

Despite Kwon’s emotional message that Samsung needs new CEOs who could build up plans for next five to 10 years, questions remain on the timing of the CEO stepping down from the post, considering the circumstances the tech giant are facing now.

“The resignation offer came in the middle of (the fourth) quarter with Samsung suffering a leadership vacuum because of the scandal that put Lee Jae-yong in jail, and he could have made such an announcement during a shareholder meeting scheduled in March,” said Chung Sun-sup, CEO of Chaebul.com. “Questions still linger over his resignation, though there is no clear answer for his decision.“

Rumors have circulated the market that Kwon have had disputes with members of owner family and that Lee Jae-yong may have ditched Kwon.

A Samsung Electronics official refuted the rumor, that even though Lee is the heir and the only son of the chairman, he has no authority to make such a high-profile decision for now.