The Seoul Central District Court said there is the “possibility of her destroying evidence,” issuing an additional warrant to extend her detention for another six months. Her six-month detention order was set to expire Monday. 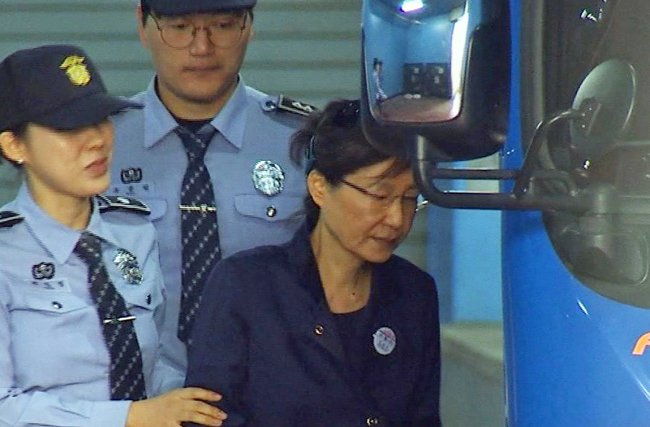 Ousted former President Park Geun-hye leaves a Seoul court on Friday. (Yonhap)
State prosecutors last month asked the court to extend her detention, citing the possibility of Park refusing to turn up at hearings or attempting to fabricate or destroy evidence.

Park’s defense team, however, called for her immediate release, citing the principle of “innocent until proven guilty” and “investigation without detention.”

Park stands accused of colluding with her longtime friend Choi Soon-sil to take bribes worth 43.3 billion won ($38.4 million) from large conglomerates, including Samsung Group. Other charges include coercion and leaking government secrets.

The court began to hear her case on May 23. It has held four hearings since June 1, summoning more than 70 witnesses. There are about 300 more witnesses to call in, including the heads of LG Group, GS and Hanjin Group. It is not certain whether a ruling on Park can be reached within this year.

Other key figures at the center of the corruption scandal, including her confidante Choi, ex-presidential secretary An Chong-bum and former chief of staff Kim Ki-choon, also had their detentions extended by the court.

The main opposition Liberty Korea Party blasted the decision, saying “the court yielded to political pressure” and calling it a “violation of human rights.” The conservative party and Park’s supporters have claimed the trial of Park has been politicized.

The ruling Democratic Party of Korea and other minor parties welcomed the decision.

Samsung Electronics Vice Chairman Lee Jae-yong began his appeals trial a day earlier to overturn a five-year jail sentence on related charges. Lee was convicted of bribery, embezzlement and other charges for bribing Park in return for political favors on Aug. 25.

Park, in return for the bribes, is suspected of pressuring the nation’s state-run pension agency to back the 2015 merger of two Samsung affiliates, which was seen as a vital step for Lee to tighten his control over the conglomerate.