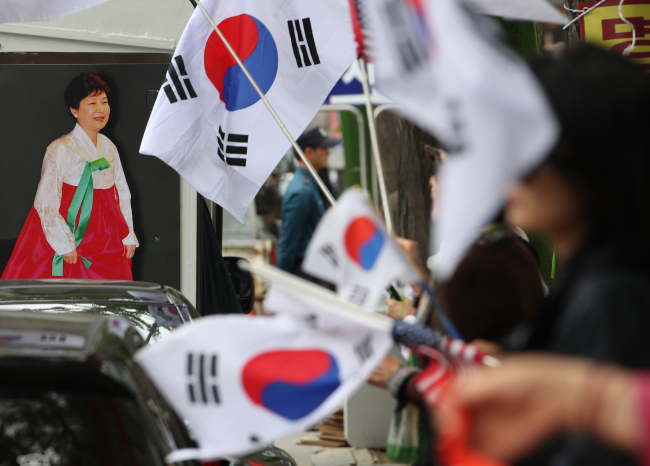 During Tuesday’s hearing, Judge Kim Se-yoon, one of the three presiding over Park’s trial, said they would decide this week whether or not to extend Park’s detention.

The pro-Park rally came as prosecutors requested the court late last month an extension of her detention by another six months, citing her ongoing trial.

Park has been detained at a correction facility in a southern suburb of Seoul since she was arrested on March 31 and indicted on April 17 on a total of 18 charges.

Hong said extending the physical detention of the former president would be like a political vendetta by Park’s opponents who are now in power.

“(The ruling Democratic Party) had impeached Park and seized power already, so (I think) it is going too far to extend her detention especially ahead of upcoming local elections (slated for June 13 next year),” Hong said Tuesday.

Roh Hoe-chan, floor leader of the minor progressive Justice Party, however, said Tuesday that there is a possibility for Park to attempt to destroy evidence as she has denied any wrongdoing in relation to her charges, making case for her continued detention.

“It is highly likely Park would attempt to contact her former aides (who are involved in the corruption scandal), including former senior presidential secretary for civil affairs Woo Byung-woo and former Culture Minister Cho Yoon-sun, once she is released,” Roh said at the meeting.

If the court rejects to issue an additional warrant, Park would immediately return home and attend the rest of her hearings until a verdict is reached expectedly around mid-November.

Pro-park rallies will continue near the Seoul court throughout the day, and possibly for days until the court decides over Park’s additional detention, their representatives told the press.

Ousted President Park, the first female president elected in South Korea, is accused of taking and soliciting some 59.2 billion won ($52 million) in bribes from large business groups, including Samsung in collusion with her longtime confidante Choi Soon-sil, and was expelled from power on March 10.

Park also faces other charges including abuse of power, coercion and leaking government secrets to Choi.