South Korea's defense ministry announced Thursday the deployment of a THAAD missile defense system has been completed in a "tentative" step to counter urgent threats from North Korea.

The announcement came soon after the US Forces Korea (USFK) transported four additional THAAD rocket launchers into its new base in Seongju, some 300 kilometers south of Seoul, despite fierce protests by local residents and activists.

Thousands of police were mobilized to help clear the way for a convoy of USFK vehicles carrying the launchers, construction and other related materials. 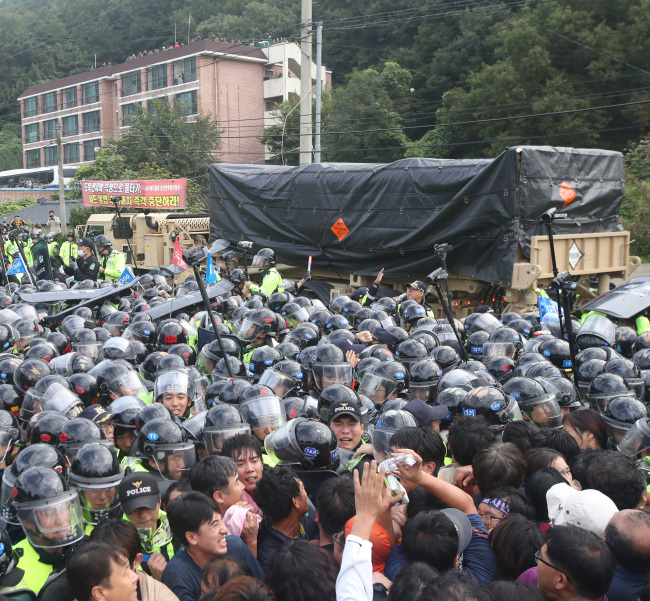 THAAD launchers move past protesters early morning on Thursday (Yonhap)
"(The allies) completed the tentative deployment of the THAAD system today, as (they) agreed to additionally deploy the four remaining launchers," the Ministry of National Defense said in a statement.

It's part of measures to protect the life and security of the people from the North's ever-improving nuclear and missile programs, added the ministry.

Ministry officials pointed out that USFK will have the capability to operate a THAAD battery by adding the four truck-mounted launchers to the two others already in place at the Seongju site.

In April, a powerful X-band radar station, along with a fire control and communications unit, was also installed at the former golf course. A THAAD battery is known to require at least six rocket launchers. THAAD is the acronym for Terminal High Altitude Area Defense.

"The battery will be operational as soon as the US finishes its internal procedures," the ministry's spokesman Moon Sang-gyun said at a press briefing. He would not predict when the whole battery will be ready to intercept North Korean missiles.

USFK officials also confirmed that the four launchers have been installed under the "existing alliance decision."

They took note of cooperation with the South Korean government and extensive security assistance from police but stopped short of giving details on the operation of the THAAD battery.

The South Korean ministry made it clear that the decision of whether to permanently deploy the THAAD equipment in the country will depend on the results of a "thorough and fair" environmental impact assessment. 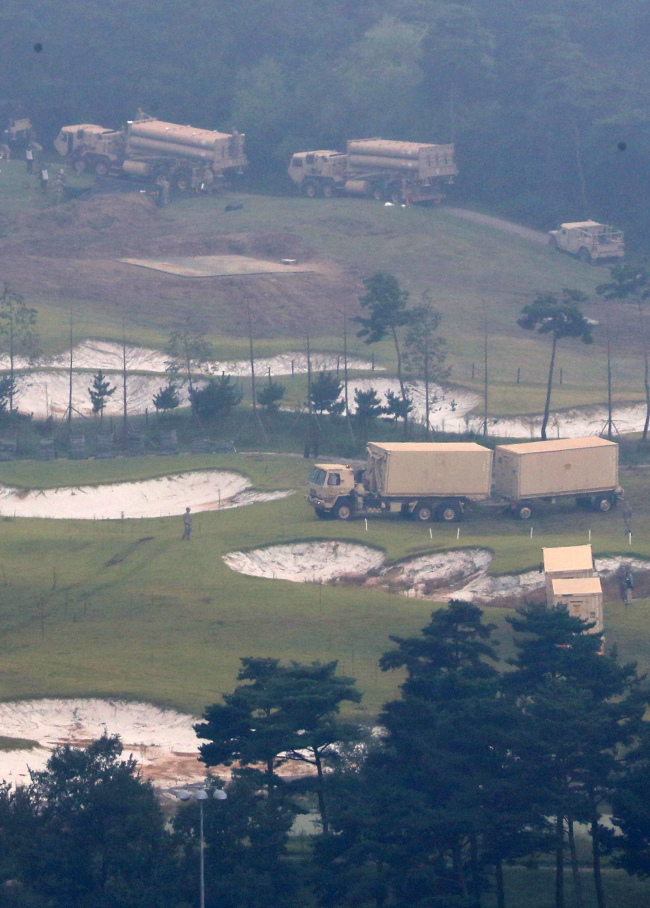 THAAD launchers enter the US military base in Seongju (Yonhap)
It added it will hold consultations with "relevant" neighboring countries on the THAAD issue.

It was apparently referring to China and Russia, which have strongly protested the allies' move. They claim the US THAAD system on the peninsula will further destabilize regional security and will be used to expand Washington's military influence.

A defense source said Seoul informed Beijing of the plan for the installation of the four launchers in advance.

The THAAD deployment came some 14 months after Seoul and Washington agreed to put the high-profile system on the peninsula. (Yonhap)