The clash occurred as police were attempting to disperse about 400 residents from their community center near the Terminal High Altitude Area Defense base in Seongju, some 300 kilometers south of Seoul.

Dozens of residents and police were hurt and taken to nearby hospitals. 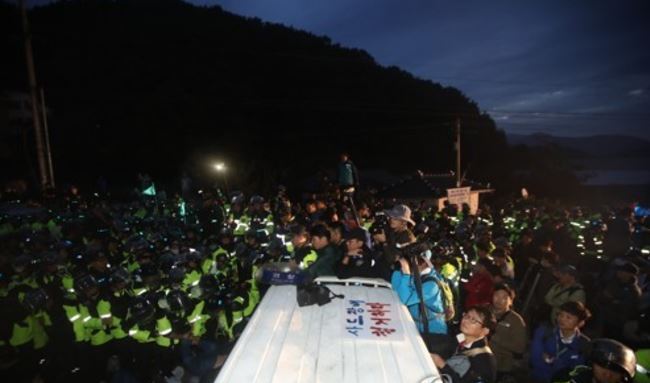 (Yonhap)
About 8,000 policemen were deployed in Seongju as about 10 US military vehicles carrying THAAD equipment left for the base from Osan Air Base, about 70 kilometers south of Seoul. The vehicles are set to arrive in Seongju around 3 a.m.

Two truck-mounted launchers and a powerful X-band radar are in operation at the base. A THAAD battery is known to require at least six rocket launchers, also involving a fire control and communications unit.

Local residents have protested the THAAD deployment for fear that their town may turn into a primary target for North Korean attacks.

They are also concerned that electromagnetic waves emanating from the cutting-edge radar could cause health and environmental problems.

The deployment comes amid heightened tensions on the Korean Peninsula over North Korea's missile and nuclear tests.

On Sunday, North Korea carried out its sixth and most powerful nuclear test in further defiance against international pressure over its nuclear and missile programs.

China and Russia have strenuously opposed the THAAD deployment, viewing it as aimed at bolstering Washington's military presence in the region and undermining their security interests. Seoul and Washington have claimed it is only for self-defense against the North.

In Beijing, Chinese Foreign Ministry spokesman Geng Shuang expressed grave concerns over the planned additional installation as he urged South Korea and the US to withdraw the THAAD system. (Yonhap)