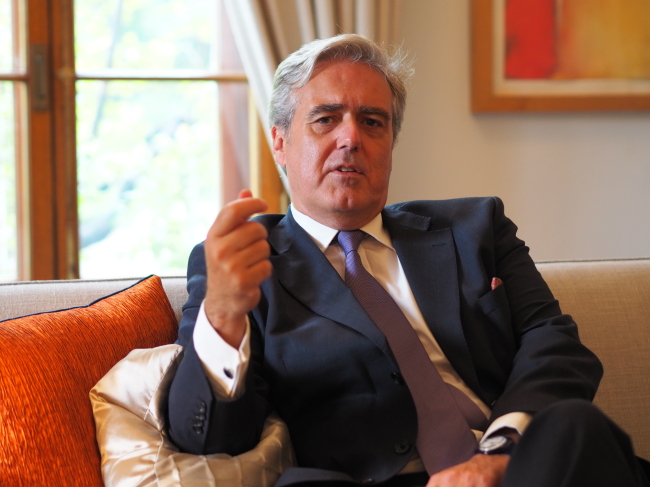 Mark Garnier, parliamentary undersecretary of state at the Department for International Trade (Joel Lee/The Korea Herald)
After the United Kingdom formally exits the European Union, the commercial relationship between the UK and Korea will be nimbler and tailored to their particular needs and demands, according to a British politician tasked with international trade and investment.

As opposed to being constrained by slow and cumbersome stipulations of the 28-member EU, the UK economy -- the world’s fifth-largest -- will be able to strengthen its partnerships with Asian economies in ways unfettered, agile and custom-made, said Mark Garnier, parliamentary undersecretary of state at the Department for International Trade.

“By being outside the EU we can do much more with our relationships with rising Asian economies in tailor-made ways as opposed to being a part of a collection of 28 nations,” he said in an interview at the British Embassy in Seoul on Aug. 10.

“As we strengthen our partnership, we may find areas where we can upgrade them, bring more focus to the interests of our nations, and change or adjust certain aspects of the deal as business dynamics and social expectations evolve over time.” 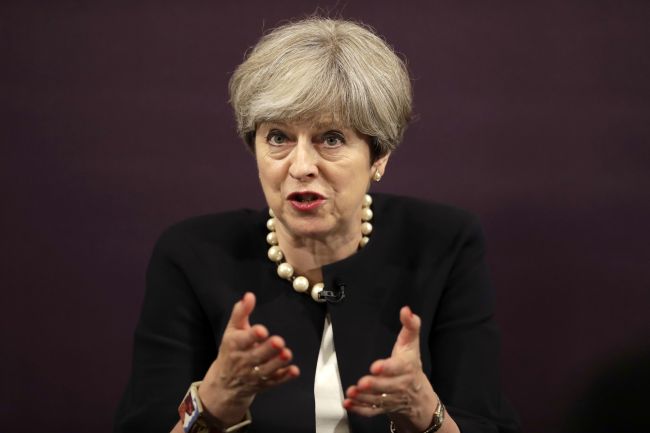 Britain's Prime Minister Theresa May gestures while answering a question during a question and answer session, after delivering a speech at the RSA (Royal Society for the encouragement of Arts, Manufactures and Commerce) in London, on July 11, 2017. (AFP PHOTO / POOL)
Garnier came to Korea in early August to promote opportunities in the country’s post-Brexit environment with an emphasis on the automotive sector. Garnier’s department of international trade has zoomed in on financial services, advanced manufacturing, aerospace and other innovative and creative industries for greater collaboration.

Annual trade between the UK and Korea exceeds $12.9 billion, with the UK accumulating a trade surplus. The top five UK exports to Korea are crude oil, mechanical appliances, road vehicles and parts, aircraft and spacecraft, as well as optical, photographic and cinematographic instruments and medical equipment. The number of British vehicles exported to Korea has increased fivefold since 2010, making the Asian country its eighth-largest export market outside of Europe.

Countering criticisms that Brexit will make Britain inward-looking and isolated, Garnier asserted “the opposite is happening,” as his country “looks forward to going off into the world and being in control of our destiny and relationships in free and unshackled ways.”

To prove the point, Garnier mentioned that the EU has only 35 bilateral FTAs in force with economies around the globe, mostly small-sized developing ones, instead of big economies like the US or China.

Referring to the US -- Britain’s largest trade partner, accounting for a quarter of its total trade -- and Asia, he said, “After Brexit there is every possibility that we can improve upon our existing trade relationship with the US by building on the World Trade Organization terms. The growth of Asia as the world’s economic engine presents huge opportunities.” 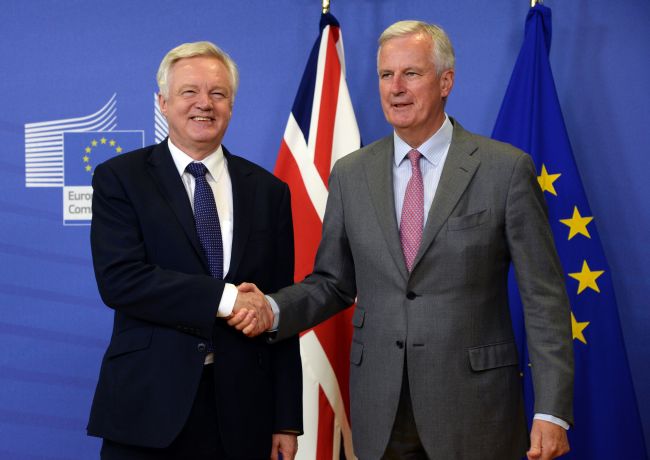 British Secretary of State for Exiting the European Union (Brexit Minister) David Davis (left) shakes hands with European Union Chief Negotiator in charge of Brexit negotiations with Britain Michel Barnier prior to their meeting at the European Union Commission headquarter in Brussels, July 17, 2017. (AFP PHOTO / THIERRY CHARLIER)
A Britain outside the EU will be able to strike free trade agreements with countries with which it didn’t have agreements previously, the investment banker-turned-politician highlighted.

Regarding the future trade relationship with Korea, Asia’s fourth-largest economy, Garnier forecast that “The prospective FTA with Korea will be nearly identical to the one we currently have through the EU.”

“What we don’t want happening is cause disruptions to existing businesses. We want to carry on without any impediments to our current commercial relationships,” the politician stressed.

Pointing to the Comprehensive Economic and Trade Agreement between Canada and the EU -- which was signed on Oct. 30 last year after seven years of negotiations and nearly came to naught amid fierce opposition from the Belgian regional parliament of Wallonia -- Garnier described effectuating a free trade accord through the EU as “extremely complicated” and taking “a huge amount of time to get it agreed by all stakeholders.”

“But bilateral deals can be done much quicker,” the member of Parliament stressed, adding “I expect the future FTA with Korea to be concluded much faster, allowing us to be agile and customized to our needs.” 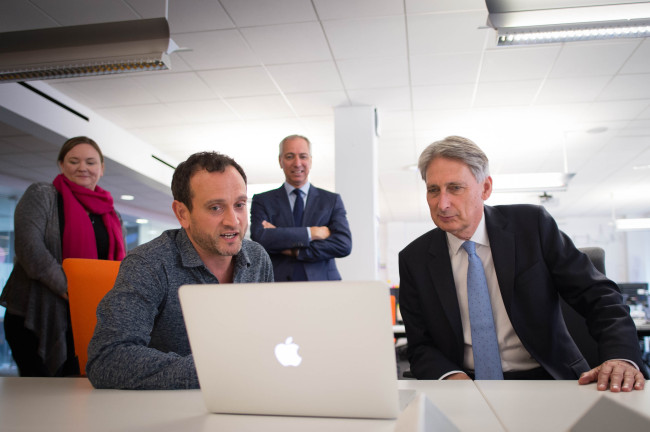 Britain's Chancellor of the Exchequer Philip Hammond (right) meets staff as he tours the IBM office in London on July 26, 2017, as the preliminary estimates for 2017 Q2 GDP are published. Britain's economy advanced slightly in the second quarter, pulled higher by the key services sector despite high inflation and uncertainty over Brexit, according to official data. Gross domestic product grew by 0.3 percent between April and June, a slight increase compared with the first quarter of the year, the Office for National Statistics said in a statement. (AFP PHOTO / POOL)
Untapped opportunities for two-way collaboration lie in services, green energy, creative industries and small and medium-sized enterprises, according to the undersecretary.

“The UK has a lot of experiences in opening up its services sector, which can be of guidance to the Korean government as it seeks to liberalize its economy,” he advised. “It started in 1986 with the deregulation of the City of London. Huge numbers of businesses came into London to take advantage of new opportunities. The City of London is the most vibrant, dynamic and important financial center on the planet.”

Garnier spent 17 years in the City of London’s stock exchange and investment banking sector from 1982, before moving to boutique investment fund management in 1999. He was elected as a Conservative Party member of Parliament for Wyre Forest, a county constituency in Worcestershire, England, in May 2010.

“We have demonstrated that opening up the financial sector allows the economy to grow. It brings in greater skills, people, capital and opportunities, benefitting the local businesses as well, as taxes are levied on large international companies.”

On green growth, he said, Britain is undergoing an industrywide transformation for more sustainable forms of energy production, storage, distribution and usage. Britain is the world’s third-best country for tackling climate change after France and Sweden, according to the Climate Action Network. 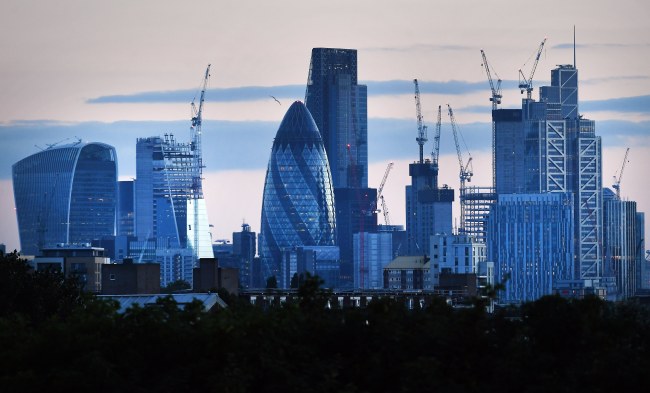 A photograph released 07 August 2017 shows the UK's financial heart, the City of London in London, Britain, 06 July 2017. (EPA/ANDY RAIN)
The UK plans to deliver 35 percent of its electricity from renewable sources by 2020-21, and has invested $67 billion in green energy sources since 2010. A world leader in the sector, the UK’s offshore wind engineering companies have joint projects with Korean enterprises.

“Working with the Korea Institute of Energy Technology Evaluation and Planning, the UK and Korea have strong energy cooperation, with ongoing research partnerships in fuel cell and smart grid technologies,” the British Embassy told The Korea Herald. “We are both committed to moving toward a low-carbon economy in a way that minimizes costs to consumers. Particularly, opportunities for greater collaboration lie in offshore wind and solar energies.”

The UK has become one of the largest markets in Europe for ultra-low emission vehicles, backed by the government’s ambitious strategic investments and long-term policies. The country’s greenhouse gas emission was reduced by 18 percent from 2010-15.

“We can work with Korea in the 21st-century creative industries,” said Garnier, referring to cinema, performing arts, film, television, advertising, publishing, architecture, art, animation, gaming, crafts, design, fashion and music, among others. “We are also working hard to encourage our SMEs to go global. The SMEs are the lifeblood of the economy as they try to become bigger companies through innovation and competition.”

Touting globalization for lifting millions out of poverty around the world and increasing the aggregate wealth of society, the bureaucrat said his government has made efforts to foster inclusive growth -- sharing the wealth created via redistribution -- through its industrial strategy.

“Our industrial strategy will look at not only people but also different cities and industries, and how they can all be part of the formula for success. We want to spread our wealth effectively across the country,” he said.