Under local regulations, the results of polls conducted from six days prior to the voting day cannot be published over concerns that opinion polls may “impede fairness and affect the election results.”

However, polls can be conducted during the six-day period, provided that results are not published and the National Election Commission has been informed beforehand. 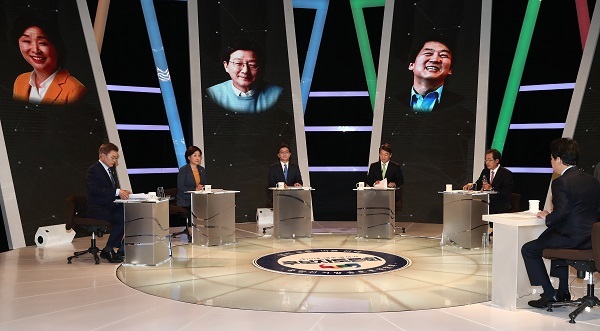 Five leading candidates for the May 9 presidential election attend a joint debate forum at a TV station in Seoul on April 28, 2017. (Yonhap)
With the poll results closed and early voting taking place for two days from Thursday, the candidates are gearing up for the last stretch.

All of the five candidates cut electioneering to a minimum Tuesday to prepare for the last live TV presidential candidate debate hosted by the national election body later in the evening.

Front-runner Moon, who is leading the race, is seeking to cement his victory. He topped the list of party-backed contenders with 42.6 percent of support in the latest poll by Realmeter on Sunday.

Ahn Cheol-soo of the People’s Party took 20.9 percent of support, while conservative Hong Joon-pyo of the Liberty Korea Party chased him in a tight race with 16.7 percent.

With conservative voters appearing to be rallying behind him, Hong seeks to become the main rival to the leading candidate Moon.

On Tuesday, 13 lawmakers from the conservative Bareun Party declared their support for Hong, opting to back the Liberty Korea Party candidate over their own Yoo Seong-min.

Sim Sang-jeung of the progressive Justice Party posted support of 7.6 percent and Yoo came in last with 5.2 percent.

While political pundits say it is difficult to be certain of the results, the final polls of previous elections show that it is not easy for a runner-up candidate to turn the game around.

The last poll for the 2012 presidential election by Gallup showed former President Park Geun-hye garnering 47 percent of support, while liberal candidate Moon took 42 percent. The final results showed that Park won the race with 51 percent of votes, while Moon had 48 percent.

In 2007, former President Lee Myung-bak stood at 45 percent of support against Chung Dong-young with 18 percent. The actual turnout mirrored the poll, with Lee garnering 49 percent of votes and Chung taking 26 percent.