Some of Monday’s highlights at New York Fashion Week: 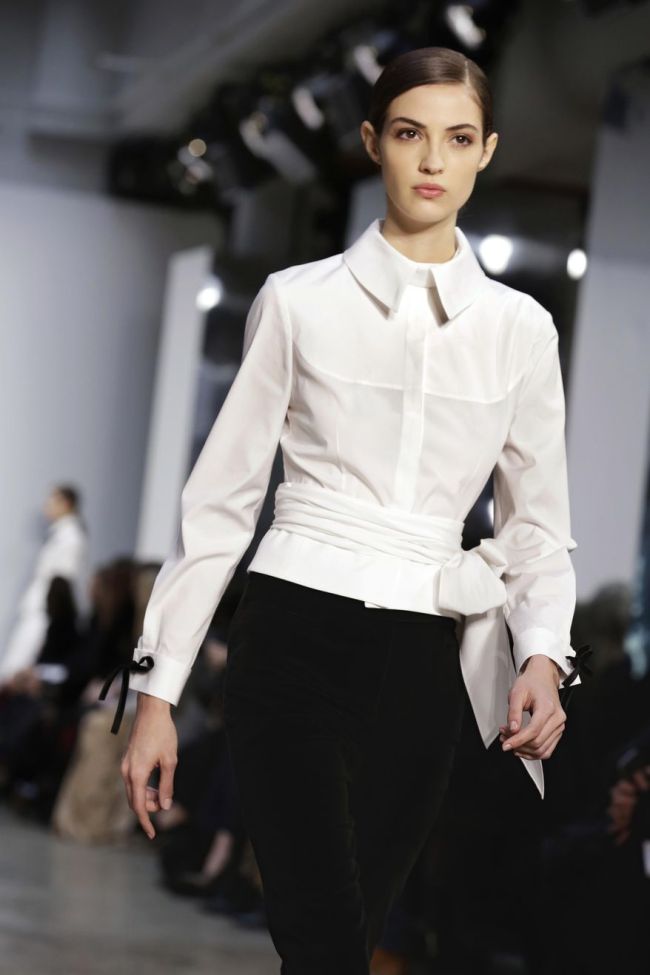 Fashion collection from Oscar de la Renta is modeled during Fashion Week in New York, on Monday. (AP-Yonhap)
Few women rock a white blouse like Carolina Herrera – it’s her personal signature garment. But there are lots of ways to make a white blouse, and the veteran designer presented a variety of those, in a collection she called “my white shirt moment.”

Her aim, she said backstage, was “to show the white shirt and how to wear it, and also it’s all about calm elegance. Very calm, uncomplicated silhouettes and effortless looks.”

This Herrera collection seemed to have a more relaxed vibe, with a number of models wearing flat granny boots, for example, as they strolled the runway in white shirts and black skirts.

“I think it’s a very feminine collection, but not complicated at all,” Herrera said. “I call it uncomplicated because they’re simple lines but they all have sort of an extravagant detail that’s unique.”

“Well I know Ivanka since she was a little one,” Herrera noted. “She has been a friend always, and she is very loyal to the house of Herrera. She always comes to me, and I think she looked fabulous because she‘s a beautiful girl.”

Herrera’s white shirts were all crisp, of course, but they came in different styles, and many of them sported bows: at the collar, around the waist, or on the puffs of sleeves. As the show transitioned away from shirts, the bows reappeared everywhere: at the pockets of a coat or on filmy gowns, at the shoulders or around the neck, on the back or at the front.

Standouts were a stunning sleeveless teal gown with a V-neck and a black strip around the waist; a burgundy crocheted dress; and a gown with a black bodice and a tiered, black-and-white skirt.

Asked by someone backstage to define their collection in three words, designers Lazaro Hernandez and Jack McCollough of Proenza Schouler had an easy answer: New York City.

The duo is moving to Paris next season -- not moving their company or home, but showing at Paris Fashion Week rather than New York. So they were in the mood to say a nice goodbye. Especially with the energy -- political energy, that is -- that they’ve been feeling.

“It’s really our idea of New York,” Hernandez explained. “The energy of the last few weeks really has been inspiring to us. Everyone getting together and standing up for what they believe in. For us, it’s not a time for sitting at home in a bathrobe and slippers and being comfortable, it’s a time to put on a flat shoe and a leather jacket and you go out there and you stand for what you believe in and you fight for the things you want.”

Besides, he added, “We’re going to Paris next season, and so it for us was a celebration of everything we love about New York.”

McCollough explained that the label wants to show their collection earlier -- starting during Paris couture season in July -- to give it more time to “live” on store shelves. “Now it lives on racks for six weeks,” he said. “This is what we pour our heart and soul into, so why not do it earlier and have it last longer in stores?”

The show began with roomy menswear-style coats, with the label’s logo represented on straps. There were dresses in a shiny leather, but coated with a plastic finish, “so it’s sort of a trashbag feeling,” McCollough said. “Asymmetry was a big thing for us this time,” he said. “Also lots of sheer knits, a mix of opaque and sheer knitwear.”

“We wanted everything to feel off to one side,” added Hernandez. “All the cutting came from the idea of a brushstroke.”

A standout was a striking fire-engine red-and-black knit dress with one shoulder entirely exposed and a diagonal swath of midriff showing. (AP)