More than 230,000 people will flood into America’s biggest city and cultural capital to attend the bi-annual style bonanza held in September and February, where hundreds of shows, deals and parties rake in nearly $900 million.

Celebrity watchers will be out in force for rapper Kanye West, who returns to the public eye after a rumored nervous breakdown to show his Yeezy Season 5 range, no doubt hoping to avoid the complaints of last season, when models fainted and his hand-picked audience wilted in a much-delayed, sweltering out-door show.

While most events will take place in the achingly hip Chelsea and Soho neighborhoods, the king of cool Alexander Wang is reportedly making the glitterati trek all the way to Harlem, the historical heartland of African-American culture.

But expect a topsy-turvy fall-winter 2017 season with liberal America up in arms over the Trump presidency, absent designers and growing questions about the merits and format of fashion week period. 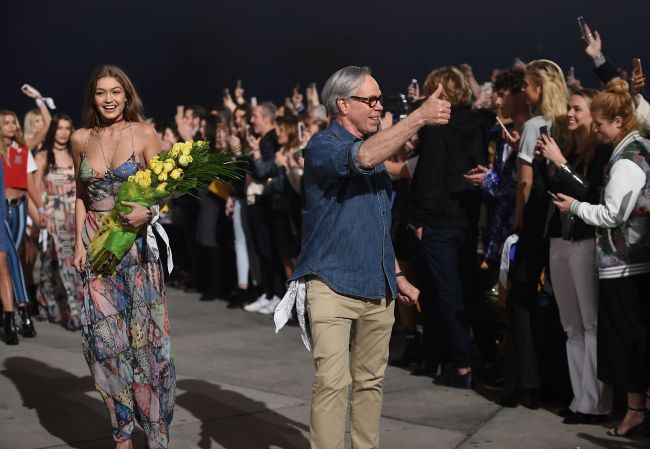 Tommy Hilfiger, the multi-billion-dollar brand loved for its theatrical shows, is leading the exodus to Los Angeles, unveiling his second collection in collaboration with model Gigi Hadid on Venice Beach.

Following suit are Rachel Comey and Rebecca Minkoff. Hood by Air and Rodarte are Paris-bound, with Proenza Schouler to follow in July after a fall-winter 2017 swan song in New York on Monday.

Vera Wang is replacing a runway show with a short movie, to be released online to coincide with the opening of shows in Paris on the same day she is to be awarded France’s highest honor, the Legion d’Honneur.

Also sitting out the season are DKNY, Opening Ceremony, which costumed a ballet production instead, and Puma-Rihanna street wear collaboration Fenty.

The most hotly anticipated event of the week is Belgian designer Raf Simons’ debut as chief creative officer at the iconic New York label Calvin Klein, unifying its brands and showcasing men and women’s wear together.

Design duo Fernando Garcia and Laura Kim will make their debut at Oscar de la Renta after showing their own label, Monse, in back-to-back time slots.

Look out for politics with New York up in arms over the controversy-laden Trump presidency.

The Council of Fashion Designers of America is teaming up with Planned Parenthood to distribute hot-pink buttons in support of the US women’s health care provider, which Republicans are determined to defund.

More than 40 brands are taking part, including Diane von Furstenberg.

What does it mean?

The consumer revolution that Tommy Hilfiger and a handful of other brands ushered in last year -- offering clothes for the current season rather than six months down the line -- appears to have stalled. At least for now.

Ralph Lauren, among those to jump ship last season, announced last week that chief executive Stefan Larsson is leaving following disagreements over how to position the clothing line in the fast-changing retail universe.

“The most disappointing thing in fashion today is that there’s so much going on,” designer Carly Cushnie says. “It was better when we all went together, collaborating, in a same calendar.”

Some are asking whether fashion week will survive in its current format, with live streaming and engaging the consumer directly suggesting that designers no longer have to stick to the old calendar.

“I think it all is coming out of the struggles in the fashion industry to figure out how to function in the new digital world and overcrowded retail world,” said Christina Binkley, a former Wall Street Journal fashion columnist.