The travelling press bid “ciao” to Milan and said “bonjour” to Paris -- kicking off 50 fashion shows, endless parties, million-dollar business deals and the last leg of the menswear mania that will sweep the French capital for five days.

Powerhouse Valentino unveiled its couture-infused creations from the now-solo designer Pierpaolo Piccioli on day one -- and what a show it was.

Here are the some highlights of Wednesday’s events in Paris: 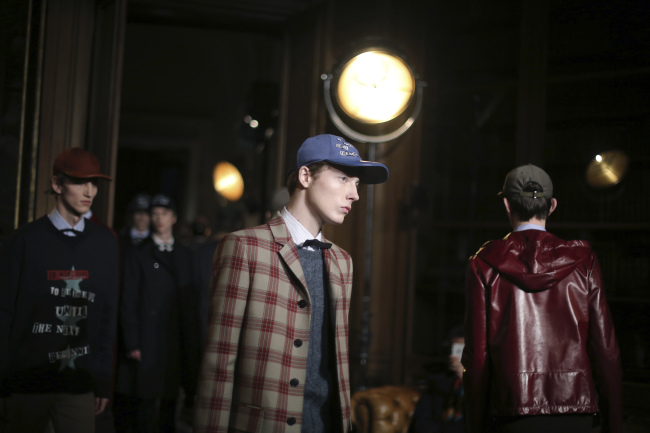 It was all about new beginnings as designer Pierpaolo Piccioli flew solo at the Valentino menswear helm for the first time following the departure of co-designer Maria Grazia Chiuri to Dior.

The normally elitist, hierarchical seating was replaced so everyone sat in the front row. The house’s traditional menswear venue -- the Hotel Salomon de Rothschild -- was moved as well to a nearby town house with significantly fewer celebrities.

Above all, the new beginnings were found in the house’s more focused styles -- with Piccioli producing Valentino’s strongest menswear show yet.

But it was the stylish cut of the coats that made this collection stand out. Exaggerated lengths of sumptuous wool were used to produce long jackets -- in monochrome and tartan -- that added a weighty, dandy swagger to many of the looks.

Ruffieux came out of the creative shadows briefly in 2016 to hold the spotlight at Christian Dior, for which he co-designed the praised Avenue Montaigne couture show. He also won notice for his time as the right-hand man of the late French designer Sonia Rykiel.

“I am thrilled to embrace my new creative role at Carven, feeling a real affinity for Madame Carven and her vision of fashion,” Ruffieux said, referring to the fashion icon Marie-Louise Carven who founded the house in 1945.

Christophe Lamaire is a master of fusing minimalism and the classic.

The former-Hermes designer produced yet another deft, wearable collection with clean lines that riffed on the utilitarian.

It was also highly masculine. The on-trend elements were oversize shirt pockets, belts with multiple hoops, big black leather boots and a silver applique that hung from the waist, evoking a set of workman’s keys.

But the colors, and the coats, and high-waist sartorial pants were the elements that provided the classical balance in this very thoughtful display.

Colors were used sparingly yet effectively -- with black fusing into terracotta, olive and a muted flash of lapis lazuli. The coats were cut in rich, oversize proportions and exuded softness -- floppy voluminous lapels and warm velvety knee-length coats.