"It is hard to acknowledge the reason, necessity and appropriateness for the arrest at the current stage (of the investigation)" the Seoul Central District Court said, citing lack of evidence and key issues that are still debated as the reasons for the rejection.

Following the court's decision, the 48-year-old tycoon was immediately released from a detention facility just south of Seoul at around 5 a.m., where he was placed behind bars for nearly 14 hours while waiting for the decision. 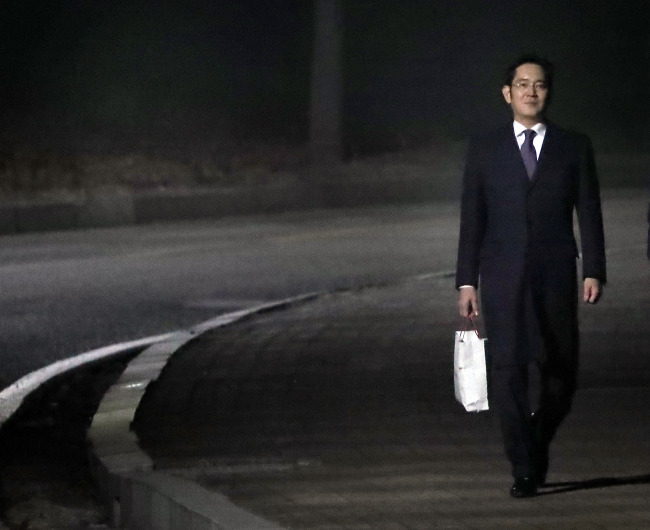 According to the independent counsel team, Lee offered bribes worth 43 billion won ($36 million) to Park’s longtime friend Choi Soon-sil in return for the Park administration’s backing of a merger of two Samsung affiliates. The merger was a crucial step for the young tycoon -- the only son of the illness-stricken Samsung Group Chairman Lee Kun-hee -- to tighten his grip on his family’s massive corporate empire.

Lee denies all charges, saying he was forced to make donations to entities controlled by Choi, including the K-Sports and Mir foundations, and did not seek any business favors in return.

“We are relieved that Samsung Group can fight for truth without Lee’s detention. We will do our best to clarify the fact that Samsung Group has never made donations (for the foundations linked to Choi) in return for favors regarding the merger of Samsung C&T’s and Cheil Industries,” said Samsung Group. “We feel sorry and regrettable that we have been involved in such allegations.”

The court's rejection for Lee's arrest warrant is likely to deal a blow to investigators who have been accelerating the probe into the bribery allegations involving Park, Choi and local firms.

The alleged Samsung bribery is a primary charge for President Park’s ongoing impeachment trial under review at the Constitutional Court.

Park is accused of colluding with Choi and her aides to extort money from Samsung and a score of other local business groups, giving them favors in return.

Several other Korean conglomerates, including LG Group and Hyundai Motor Group, also made donations to Choi’s foundations, although the investigation has not extended to them yet.