[ The Korea Herald – Send E-mail ]
Korea Inc. fears spillover from Samsung heir’s fate
By Korea Herald
Published : Jan 18, 2017 - 17:27
Updated : Jan 18, 2017 - 17:27
A court review of a request by the special counsel to arrest Lee Jae-yong, the de facto leader of Samsung Group, spread fear through the business community here on Wednesday that the unprecedented case could only be the beginning of a long list of “corporate hunt.”

The 48-year-old vice chairman of Samsung Electronics spent probably the longest day of his life at a detention center in Seoul, waiting for the court’s decision on the special prosecutor’s demand to put him in jail. 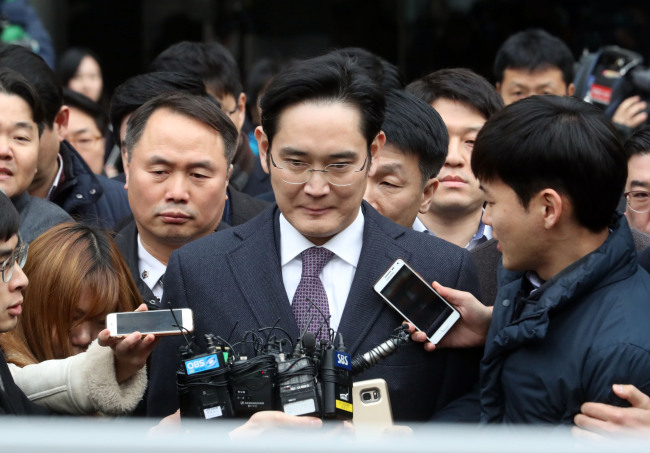 Lee is the first head of the conglomerate to have faced an arrest warrant request. Previous corruption cases involving his father Lee Kun-hee had proceeded without an arrest. The senior Lee was slapped with probation separately in 1994 and 2008 over slush fund allegations and embezzlement, respectively.

Korean businesses, as they watched the nation’s third richest man turn into a bribery suspect and face a possible arrest, expressed concerns over the probe’s impact to their own operations, and the possible damage to Korea’s credibility in the global market. A conservative Japanese news outlet even called the snowballing crisis faced by Korean chaebol as an opportunity for Japanese firms.

“Many inside the industry see Lee‘s case as the beginning,” said a company official in Seoul requesting anonymity.

“Starting with the biggest company and the most influential businessman in the country, I have no idea what would happen to companies next in line,” he said, referring to other conglomerates that provided funds to organizations set up by President Park Geun-hye’s confidente Choi Soon-sil.

The special counsel on Wednesday said in its regular briefing that it would start investigating other companies involved regardless of the court’s decision on Lee’s fate.

SK and Lotte are likely to be probed over the relationship between the ”donations“ they had made and the situations they were facing when the group‘s chiefs met Park in one-on-one meetings.

In July 2015, Park met conglomerate tycoons in a private setting.

SK Group Chairman Chey Tae-won was just about to complete his jail term while Lotte was suffering from an ugly fraternal war over the control of the group.

Samsung‘s Lee appears to be in the tightest corner as he is accused of granting 43 billion won to Choi and her associates in exchange for Park allegedly pushing the state-run National Pension Service to approve a controversial merger between two Samsung affiliates in 2015.

Samsung has denied allegations that the “donations” meant rewards. But the investigators believe that the money was given to Choi and her friends on order to complete the merger, seen as a way of Lee consolidating his power within the group. Anti-Samsung sentiment has been growing, accusing Samsung and Lee for speeding up his succession, at cost of the people’s money. NPS is the largest institutional investor of Samsung C&T.

Korean companies are also raised concerns that the nation’s judiciary power could be swayed by escalating public anger against cozy ties between politics and businesses.

“This is too intense. A few weeks ago, conglomerates were identified as victims by state prosecutors to the influence-peddling scandal, and now they suddenly have become suspects,” said another company official in Seoul.

“The contributions they made under political pressure are now being charged as kickbacks. This dramatic conversion could suspend the companies’ operation plan in the New Year as well as their corporate social responsibility activities,” he said, adding that there are not much to be done for now, except for following the investigation‘s direction.

Some foreign companies operating in Seoul kept themselves distant from the crisis-ridden Korean companies, but said that the case sheds light on corruptive practices that have been kept in the dark.

“It shows the will of the (special prosecution) to address corruption and to apply the legislation,” said a foreign CEO on condition of anonymity.