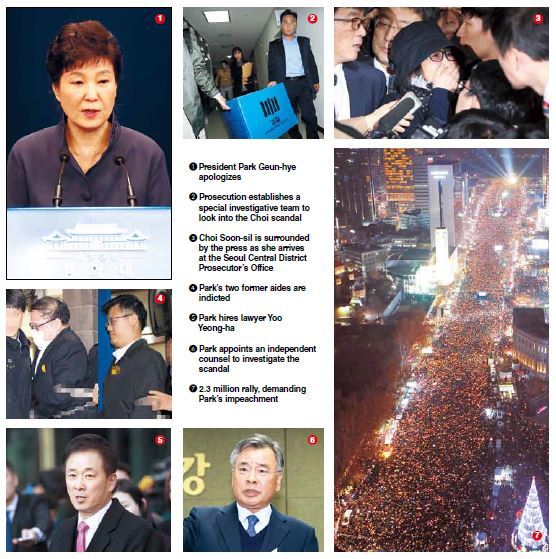 Oct. 27
Prosecution establishes a special investigative team to look into the Choi scandal

Nov. 2
In a gesture of reform, Park appoints an adviser to the former liberal administration as prime minister

Nov. 8
Park visits National Assembly and asks it to field a prime minister candidate to replace her nominee

Nov. 15
Park hires a lawyer, who rejects the prosecution’s request for a face-to-face interview with Park

Nov. 20
The prosecution names Park an accomplice to crimes

Nov. 22
Park endorses the parliamentary bill for an independent counsel-led investigation into herself and Choi

Nov. 26
An estimated 1.9 million citizens, including 1.5 million in Seoul, rally against Park

Nov. 28
Park’s lawyer rejects the prosecution’s investigation of the president
Park accepts the resignation of the justice minister

Nov. 29
Park says she will give up everything, asks parliament to decide her fate (3rd apology)

Nov. 30
Park appoints an independent counsel to investigate the scandal